Even an event as grand as the Bridal Couture Week can sometimes disappoint when the models and actors on the ramp show up in dresses that are not up to the mark and makeovers which leave a lot to be desired. While most of the top models looked stunning on the ramp, some of the leading actresses were not able to carry the heavy outfits with elegance and grace. Others wore ill-fitted clothes which was definitely the biggest disaster at the event this year. Since most of the models wearing these ill-fitted dresses were actresses, we are guessing that they did not put in the effort to try these clothes on for size. There is no other plausible explanation for this. Also, some of those actresses who know a great deal about make-up and are intelligent enough to know what looks good on them sported the worst make-up looks at the event. It was pretty clear that these actresses were chosen because they have worked closely with HUM over the years and because they are considered big stars. Clearly, they lacked the skills needed to carry the dresses they were wearing on the runway and somehow the dresses chosen by the designers for these showstoppers were not the best from the collection.

This makes us wonder why they were chosen for the job?! If models who cannot act are not part of the drama industry, actresses who cannot meet the demands of ramp modeling should not be on the runway unless they are making a special appearance the way Maya Ali did or they have the kind of energy and presence which some of the actresses did. Overall, however, the star power of these actresses could not make up for the fact that they were not skilled enough for the job, the outfits they wore were fit for the ramp and ended up looking like a complete mess.

Here is a list of the worst looks from the Bridal Couture Week 2021:

Alizeh Shah is a young and beautiful actress who unfortunately has some of the worst bridal photoshoots to her ‘credit’ already and her look for Bridal Couture Week added to this long list of worst bridal makeovers. The most ironic bit is that Alizeh was the showstopper for Kashees; a designer she has already done modeling for. The designer took inspiration from nature but we are wondering why the interpretation went so wrong. Instead of accentuating Alizeh Shah’s soft features, the make-up artist gave her the heaviest make-up look possible, and to make it worse she wore an extremely heavy black bridal outfit with larger-than-life motifs. As if all this was not enough, the big nose ring and the peacock feathers added to this over-the-top look which was all over the place! Alizeh Shah looked thrice her age and had a difficult time carrying herself. She was the perfect example of what not to do on your big day! 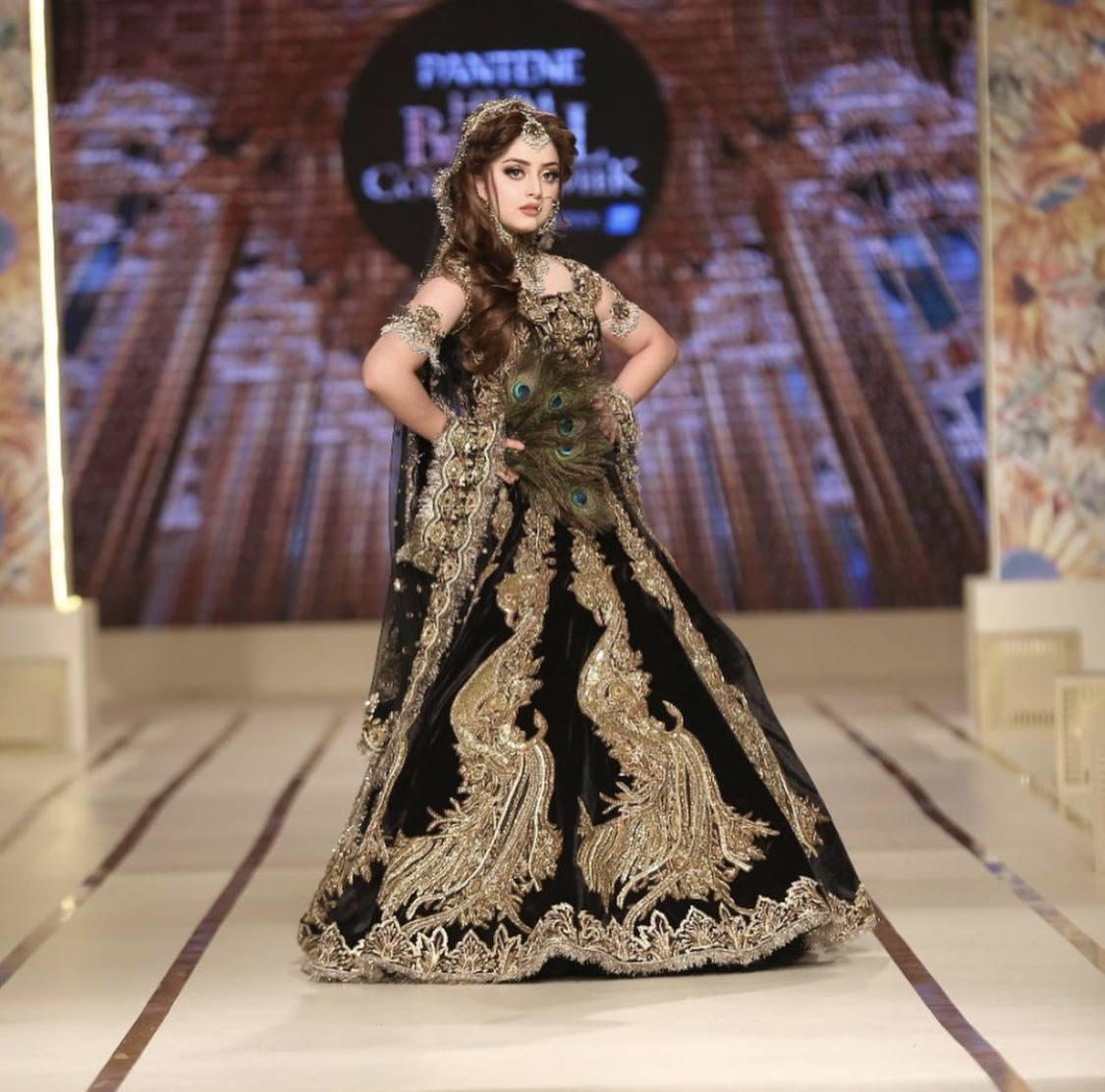 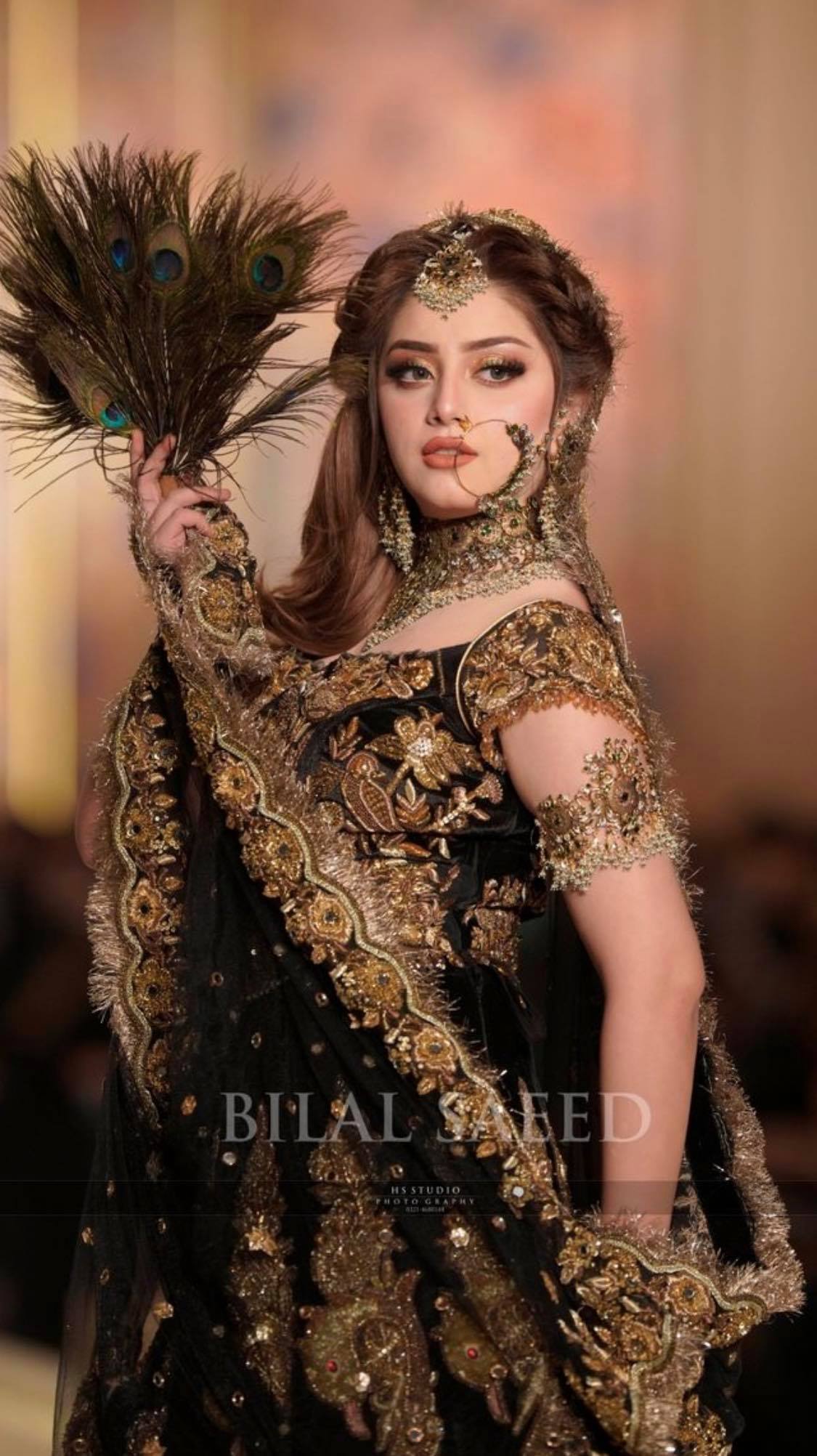 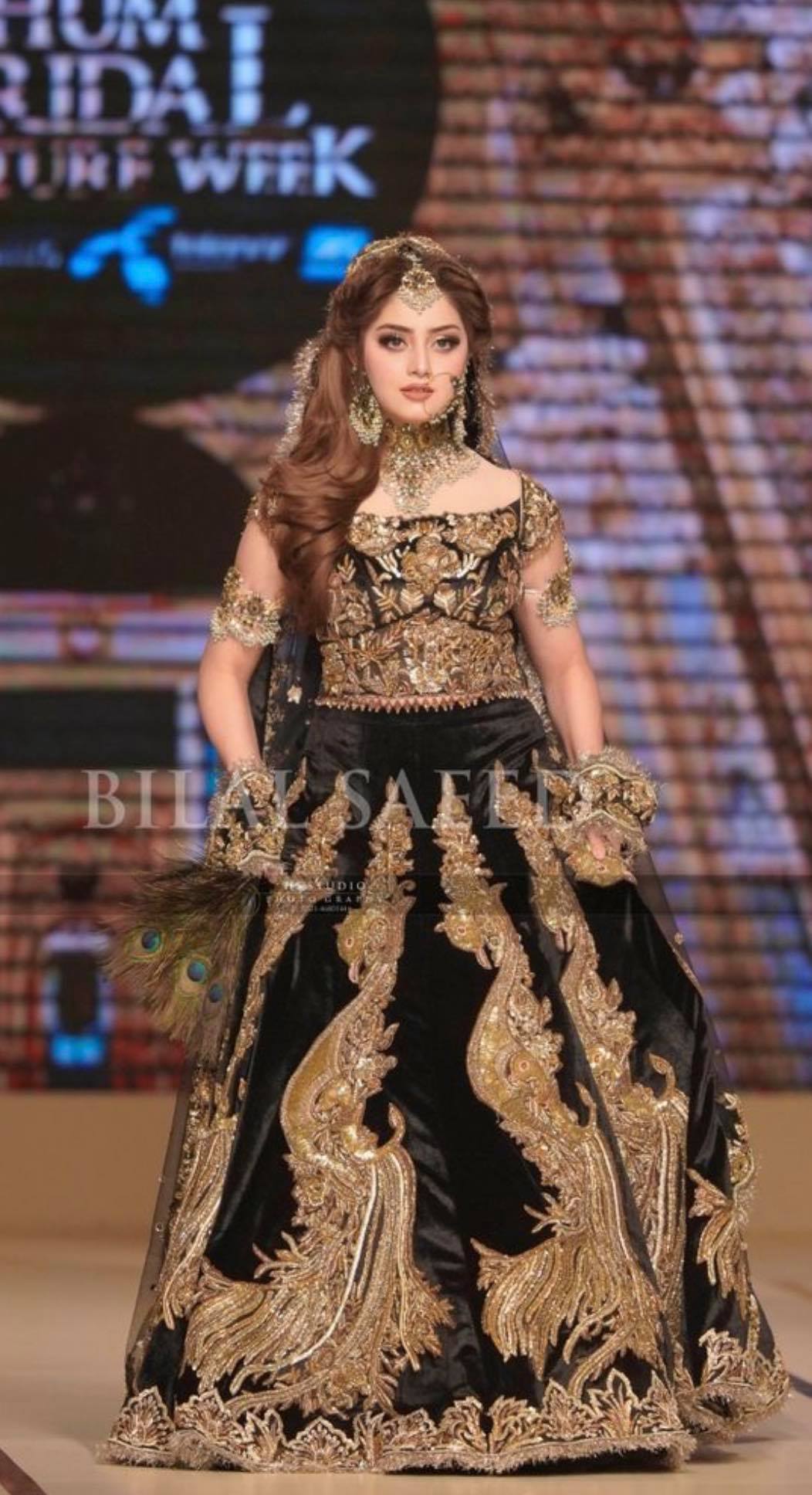 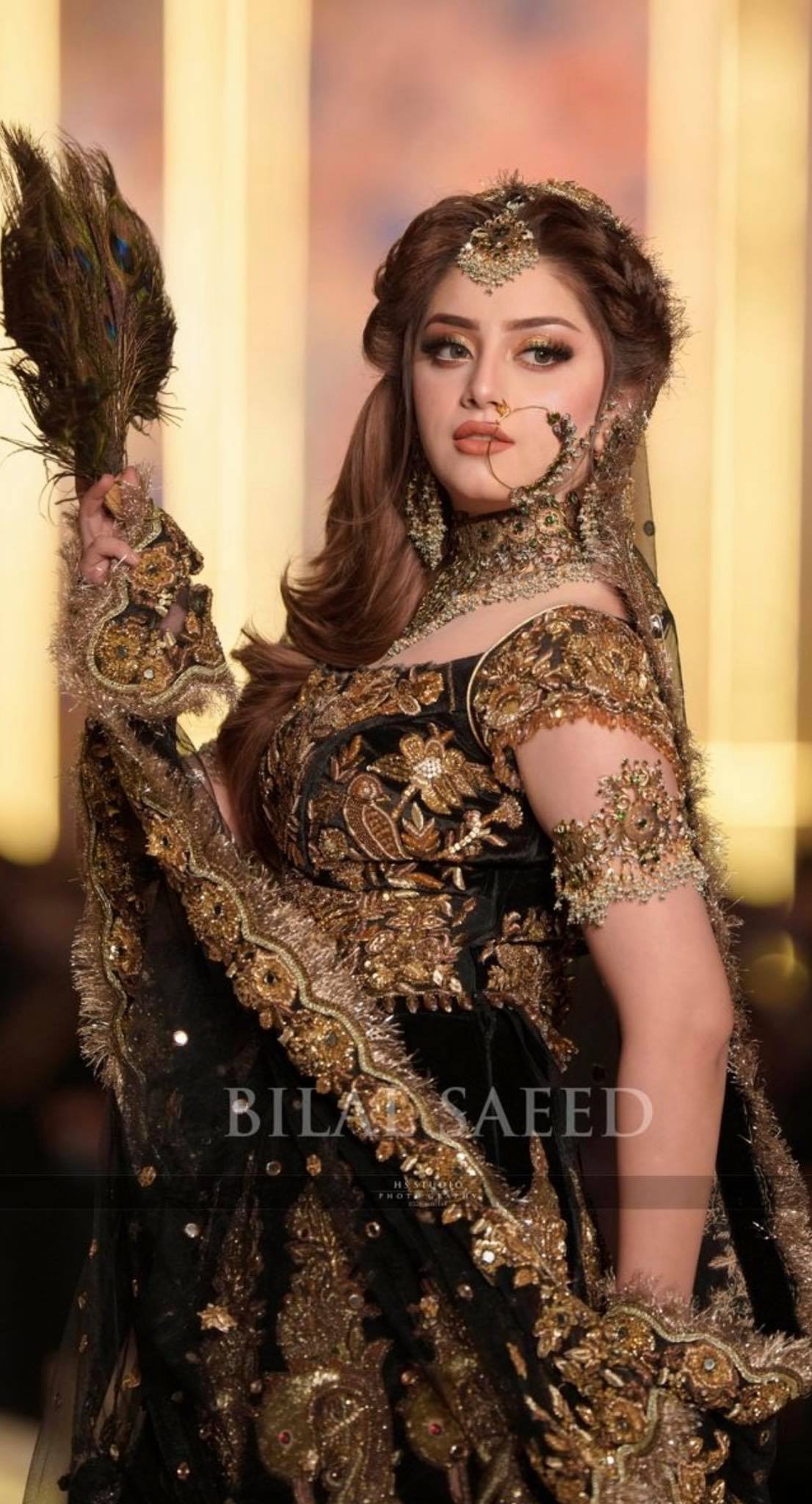 Urwa Hocane usually does not wear a lot of make-up, she knows that a soft make-up look suits her more therefore even at her own wedding, she sported such a look. Urwa Hocane is also a well-known Pakistani actress who has done many different photoshoots as well which should have made it easier for the make-up artist to figure out what kind of a look would suit her facial features. Yet somehow, just like many other actresses, she was also given a look that would remind many of a fresh cream pastry with a cherry on top. Her hairstyle was just as plain and even outdated as the make-up. The make-up artist and the stylist wasted their precious time layering Urwa’s face with make-up which she clearly did not need. The outfit she wore was also quite ordinary especially considering how well dressed Urwa Hocane actually is! We are wondering why she settled for such a look. 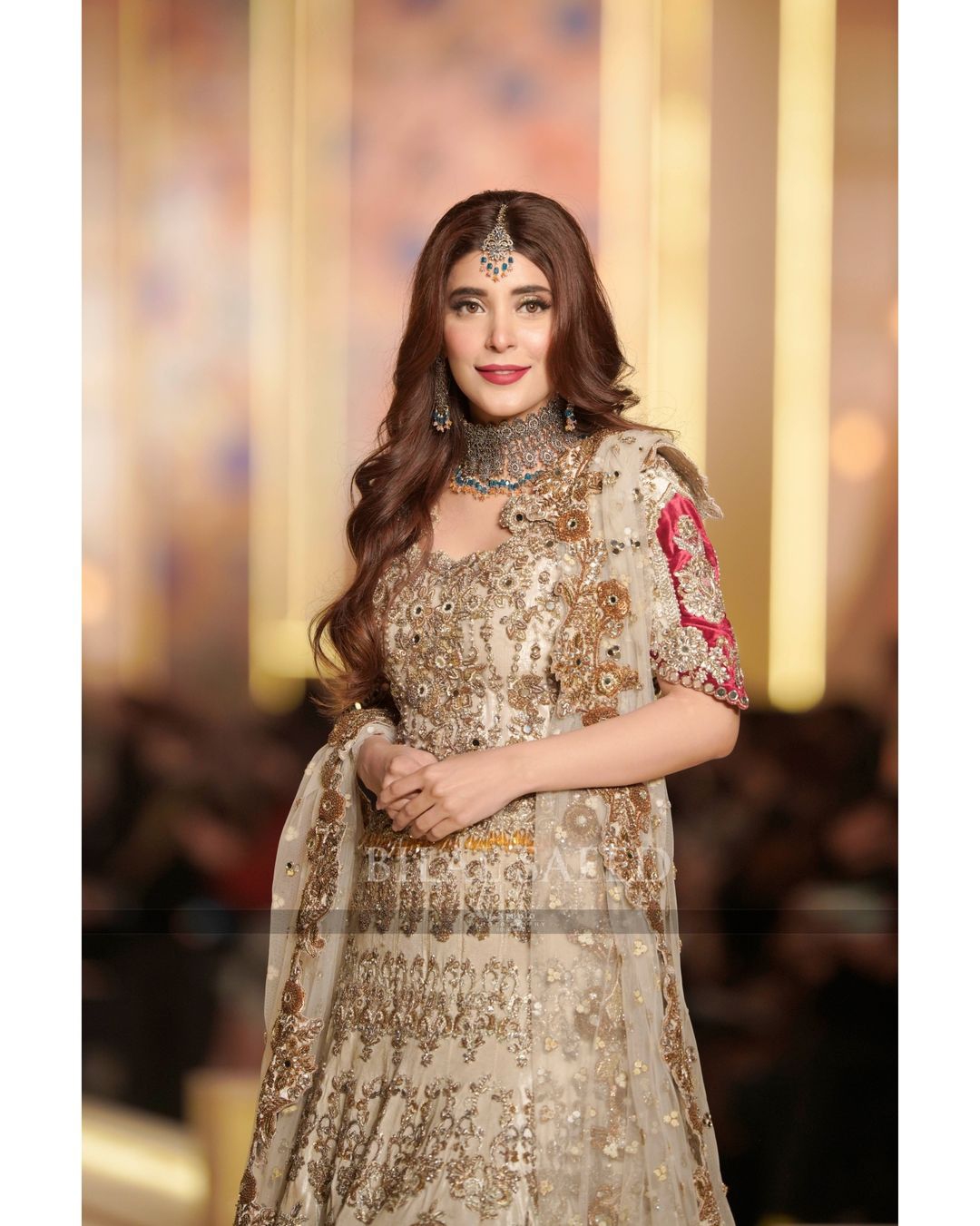 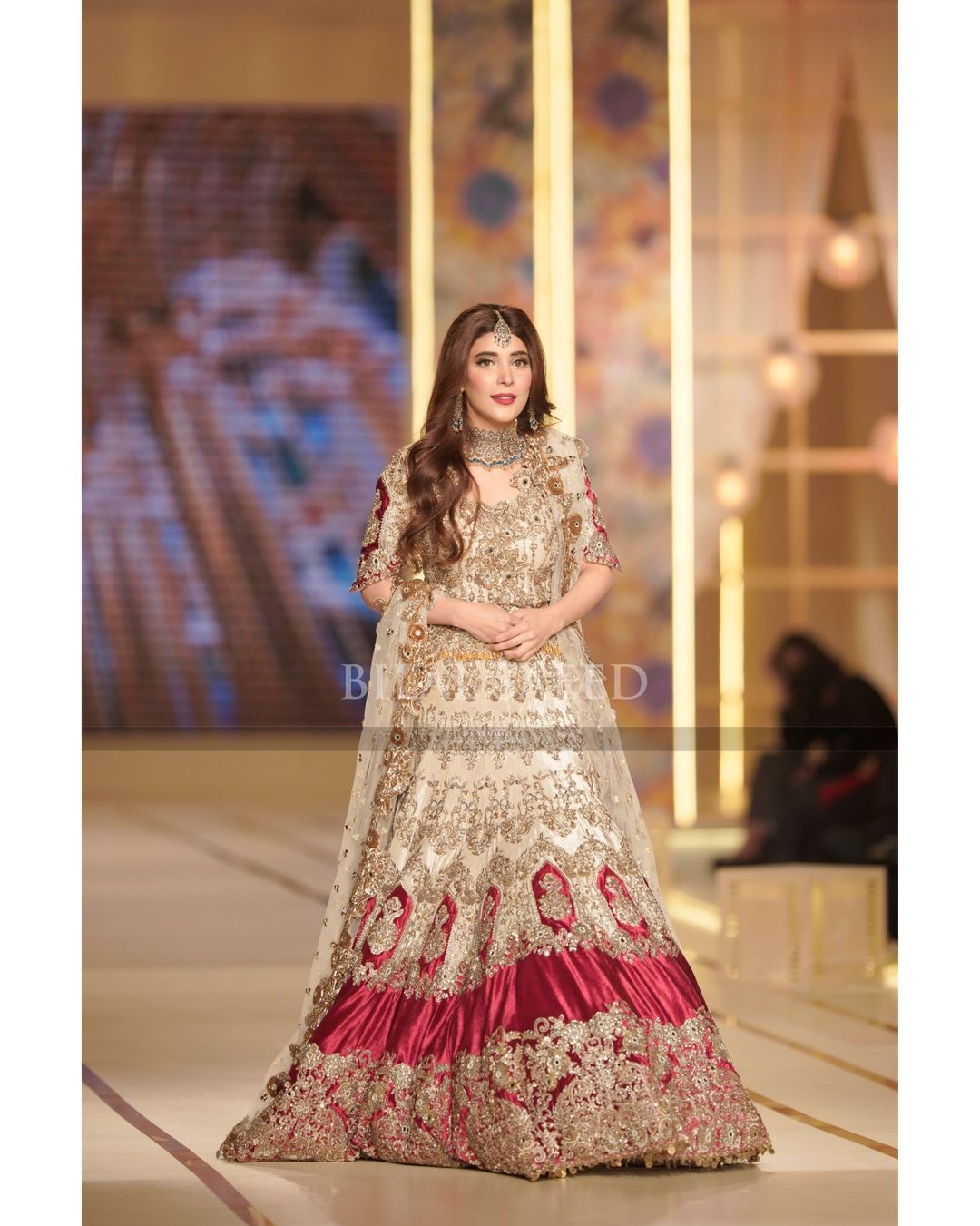 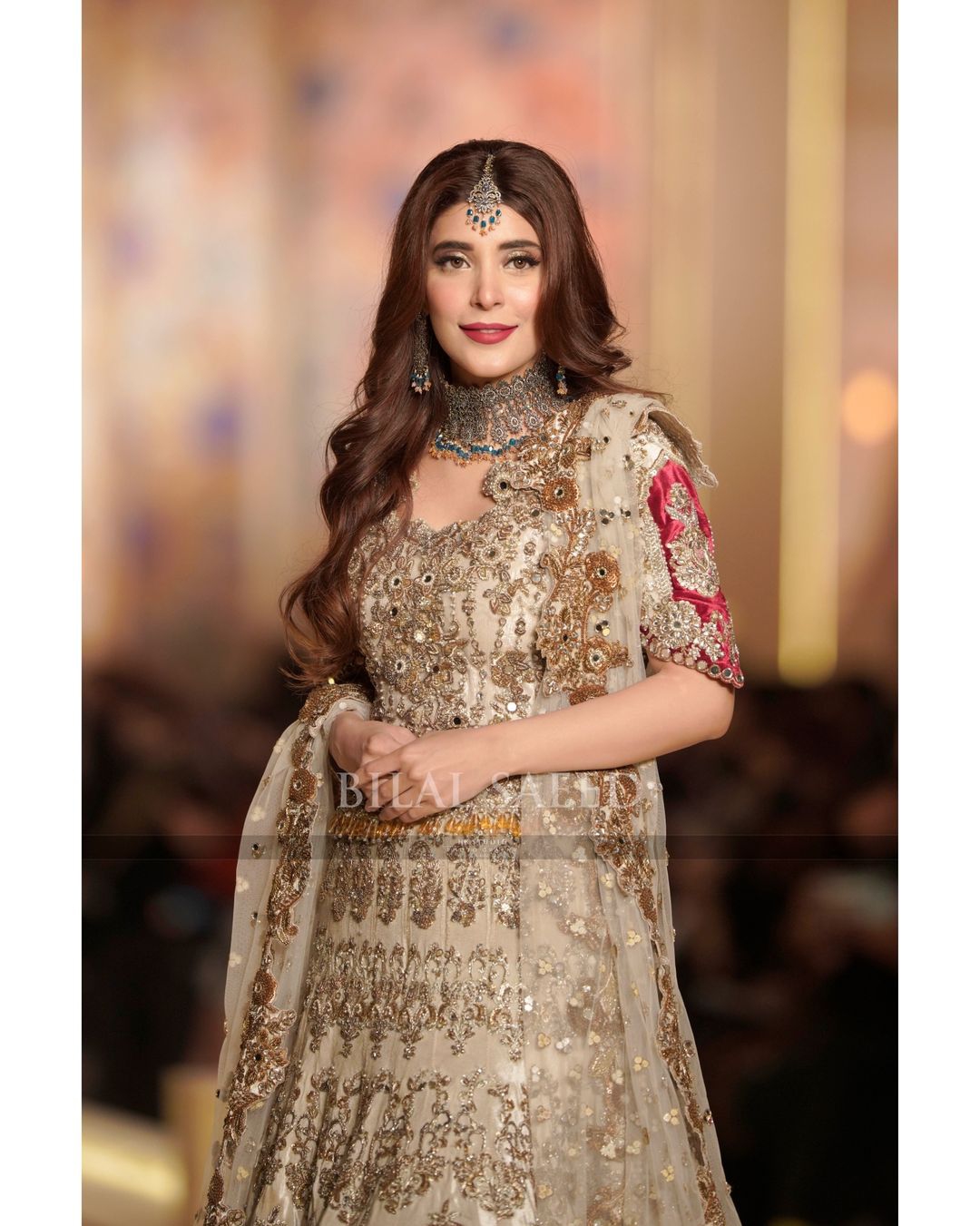 Sarah Khan is another actress who is known for her stylish makeovers just as much as she is because of her performances. She has a beautiful face, but the fact is that she does not have the skill to carry a made-up look with ease. She was struggling in the drama serial Sabaat in those high heels and this time around she was struggling equally on the ramp. However, she did look stunning in 2019 when she walked the ramp for Nilofer Shahid. Apart from the fact that she had a difficult time carrying the outfit she was wearing, her dress was ill-fitted. Her make-up and hair also did not look too appealing. The runway walk with her husband was a lot like those Insta stories people watch daily on their respective pages! All the girls out there who are about to get married should take notes and make sure that they try their wedding outfits before wearing them on their big day and choose their make-up artists intelligently! Not only was the outfit badly fitted but it was also not the best design considering that she was the showstopper for the designer. The shoes Sarah Khan chose to wear perhaps because she was too scared to wear heels were not a beauty statement either! Had she worn sneakers and made them stand out, it would have perhaps passed as one. 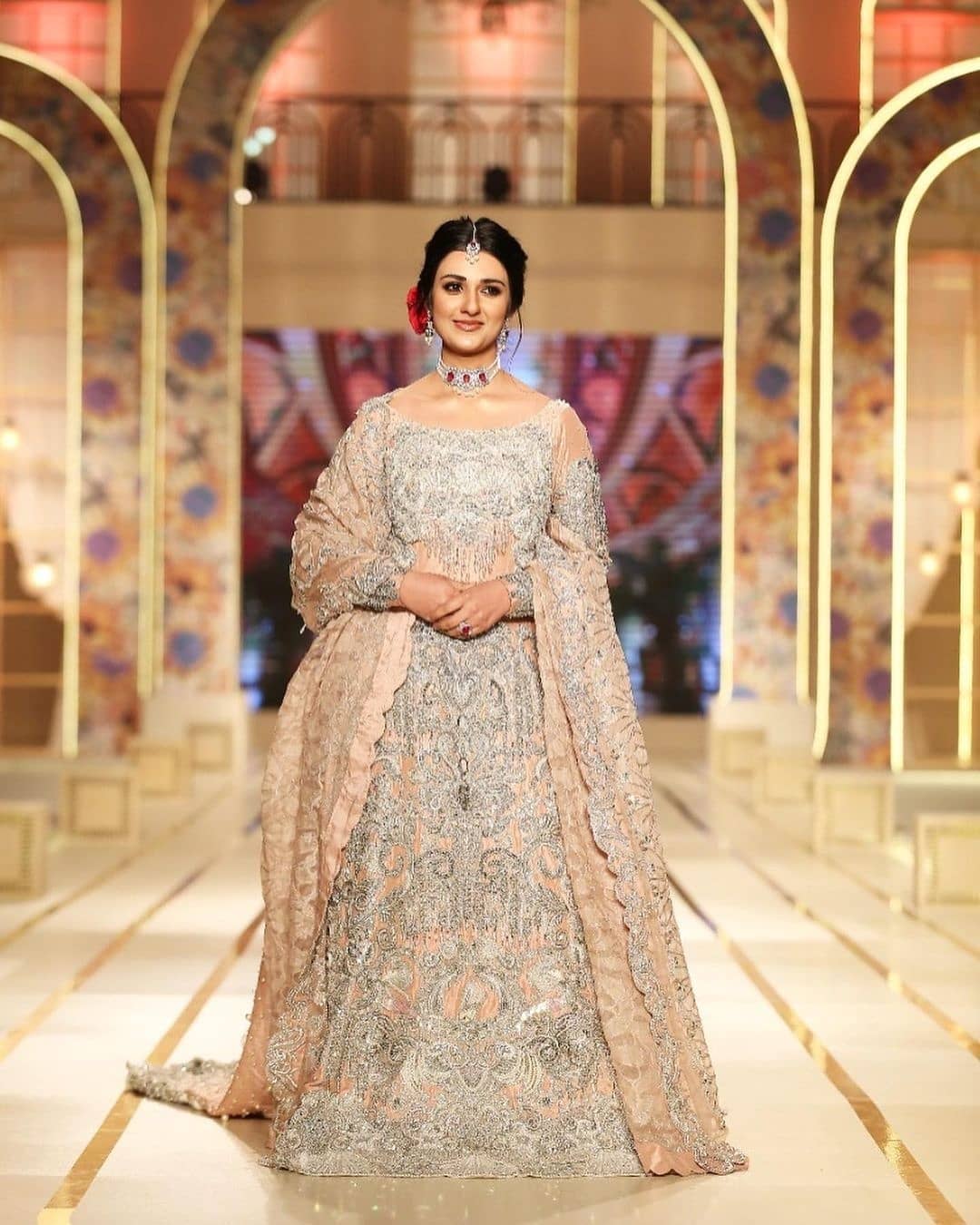 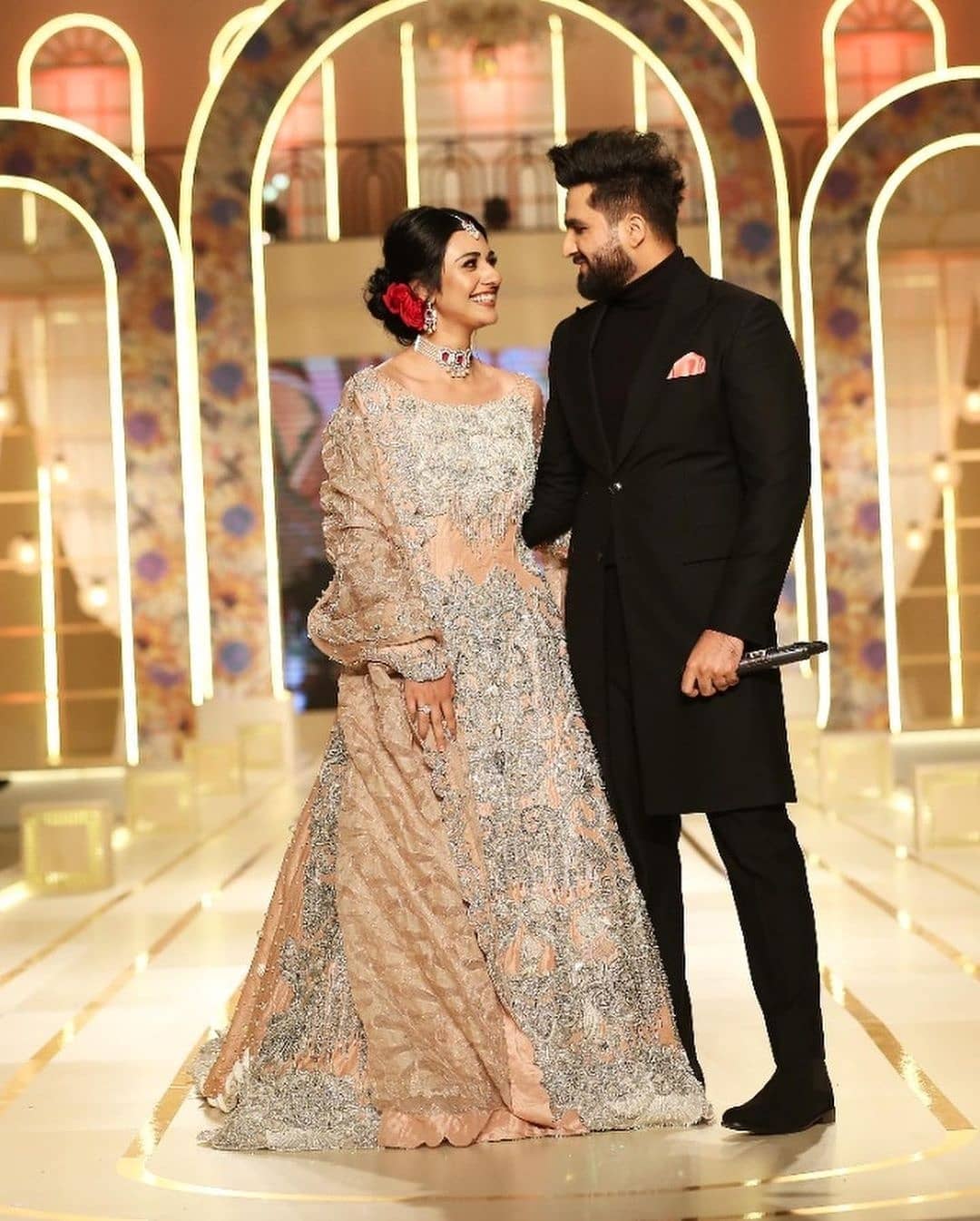 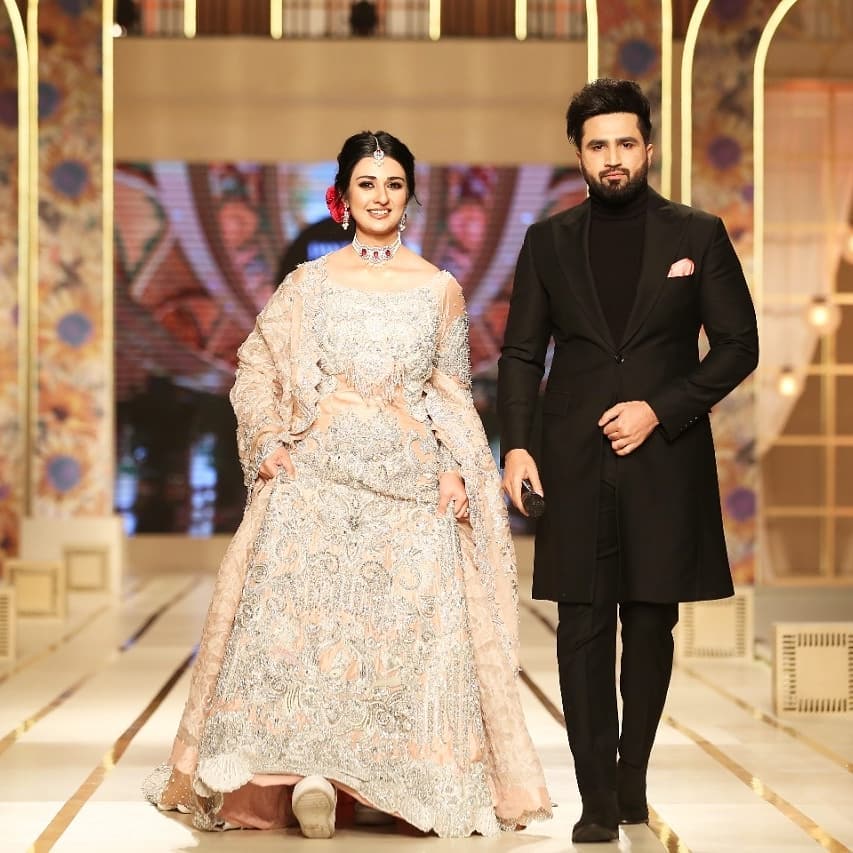 Even before Hira Mani acknowledged that walking on the ramp was really difficult, we could feel her pain by looking at how much effort she was putting into making sure that she managed to pull this one off without falling. She was the showstopper for Alishba and Nabeel. Apart from her heavy bridal make-up which did not compliment her features at all and made it seem like the load of the make-up was weighing her face down, the dress she wore was definitely not the kind of design you expect to see on the ramp. The sleeves of her blouse and the fitting looked like another case of ill-fitting. There was nothing extraordinary about the fabric used by the designers and the techniques were outdated as well. Hira Mani has looked a lot better in the selfies she takes herself and shares on social media. The make-up artist completely failed to give her the right look for the evening and the outfit was not fit for a showstopper. 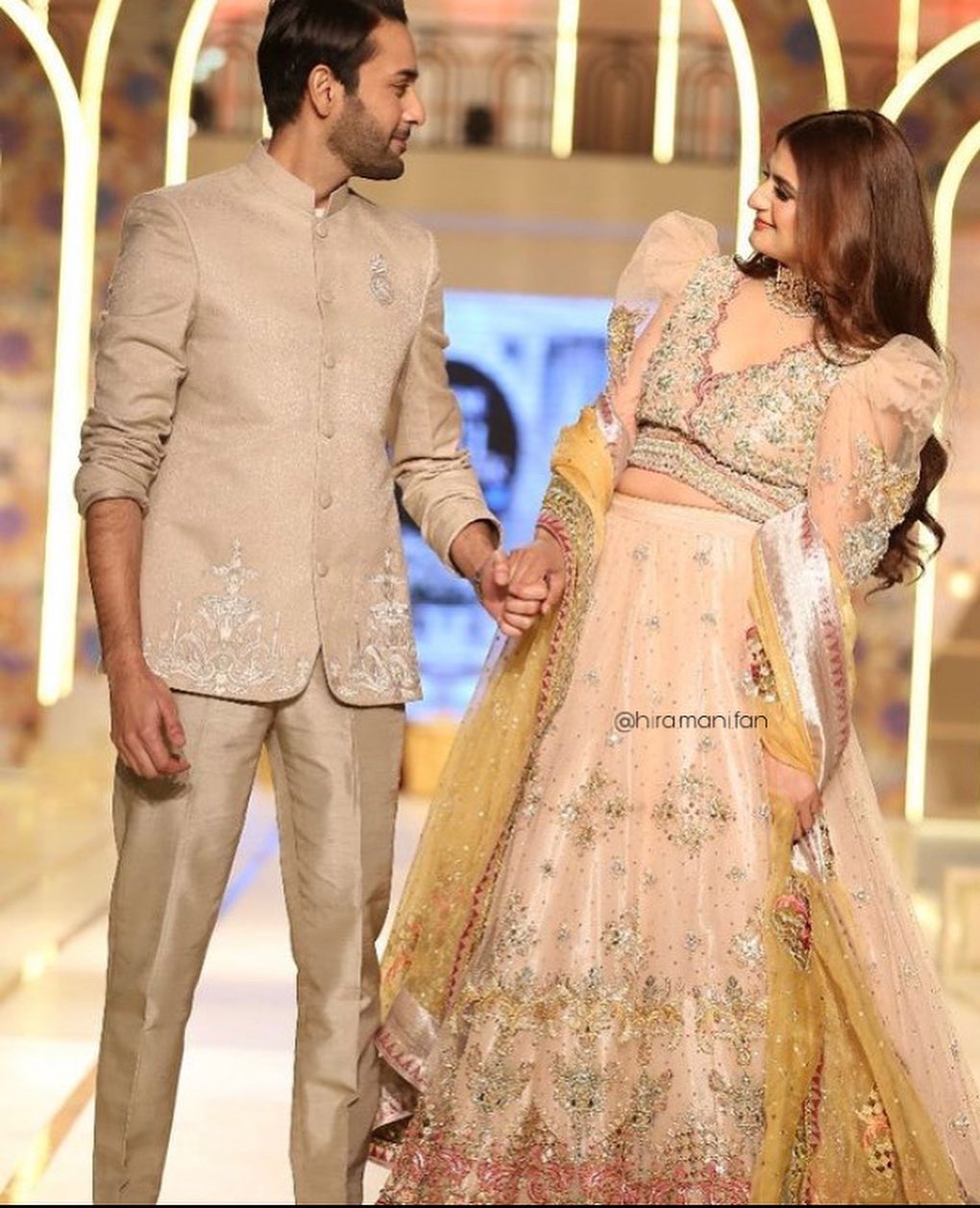 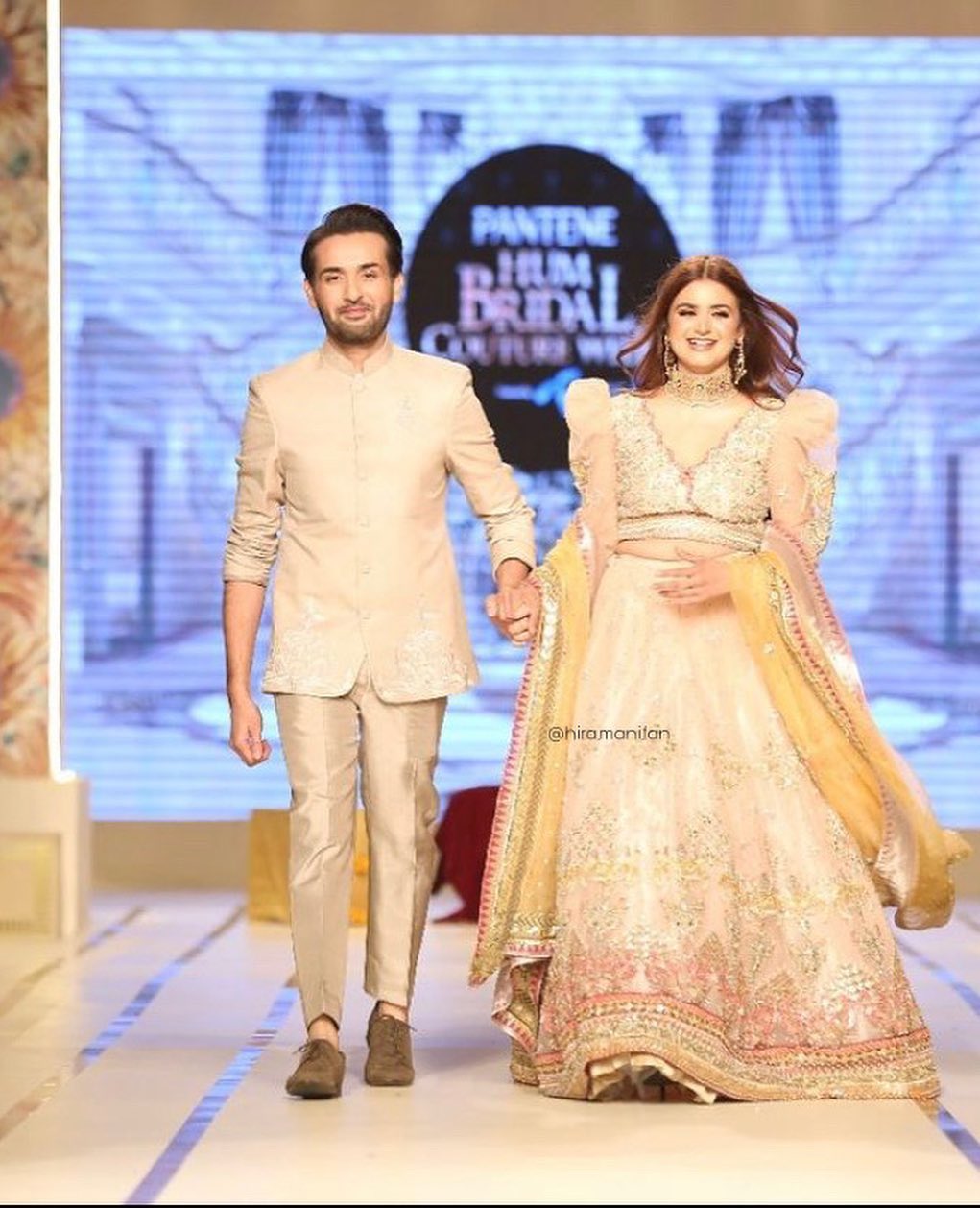 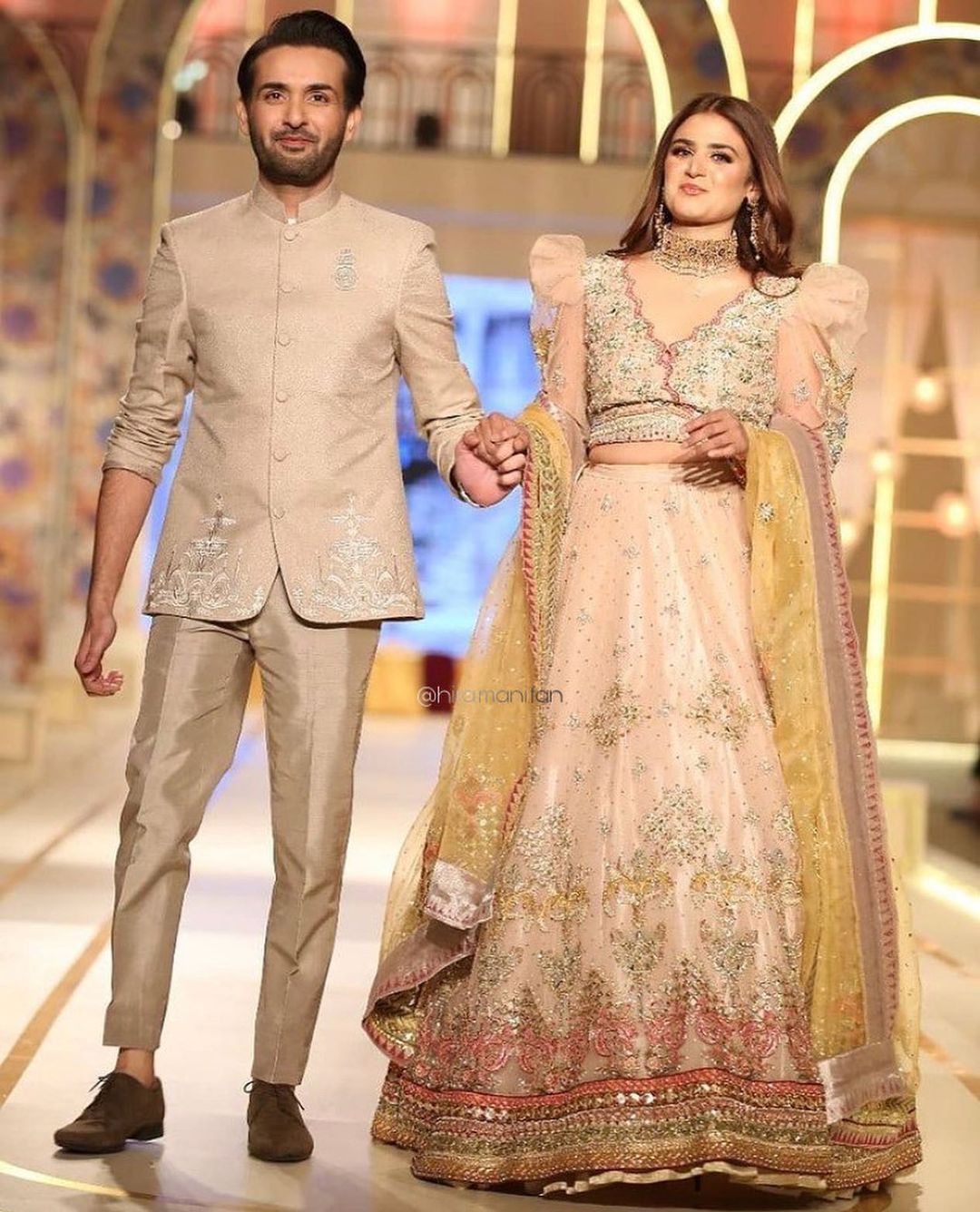 While most of the actresses were a little too made up for the occasion, Zubab Rana was quite the opposite. Her overall look was average, to say the least since even though her make-up was better than all the other actresses on the list, her hairdo was too casual and her outfit didn’t have much going for it. The box clutch she carried was just as unexciting as her entire look. The designer and even the stylist played a little too safe and ended up creating a look that was dull and definitely not stylish or glamorous enough for the occasion. 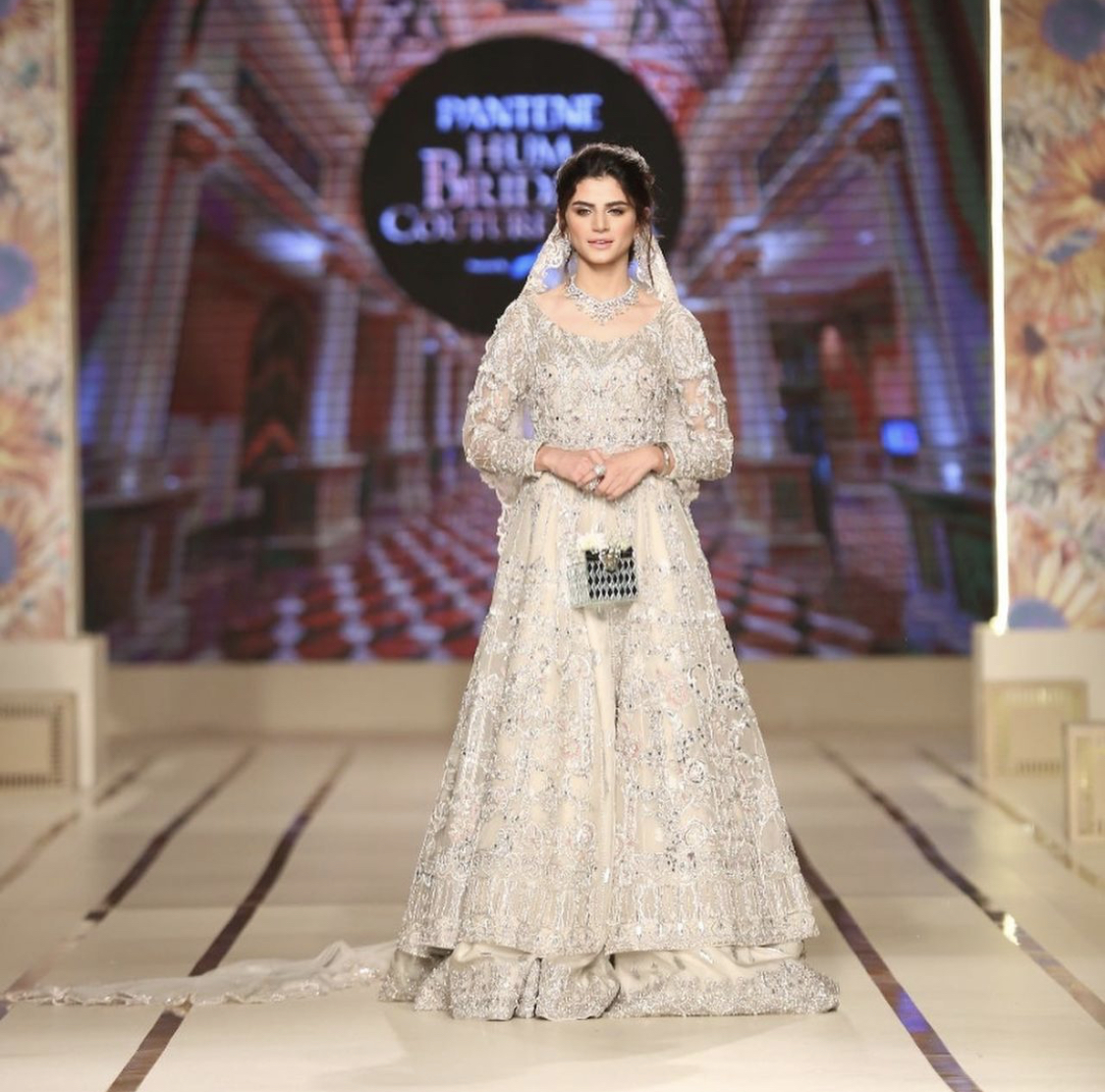 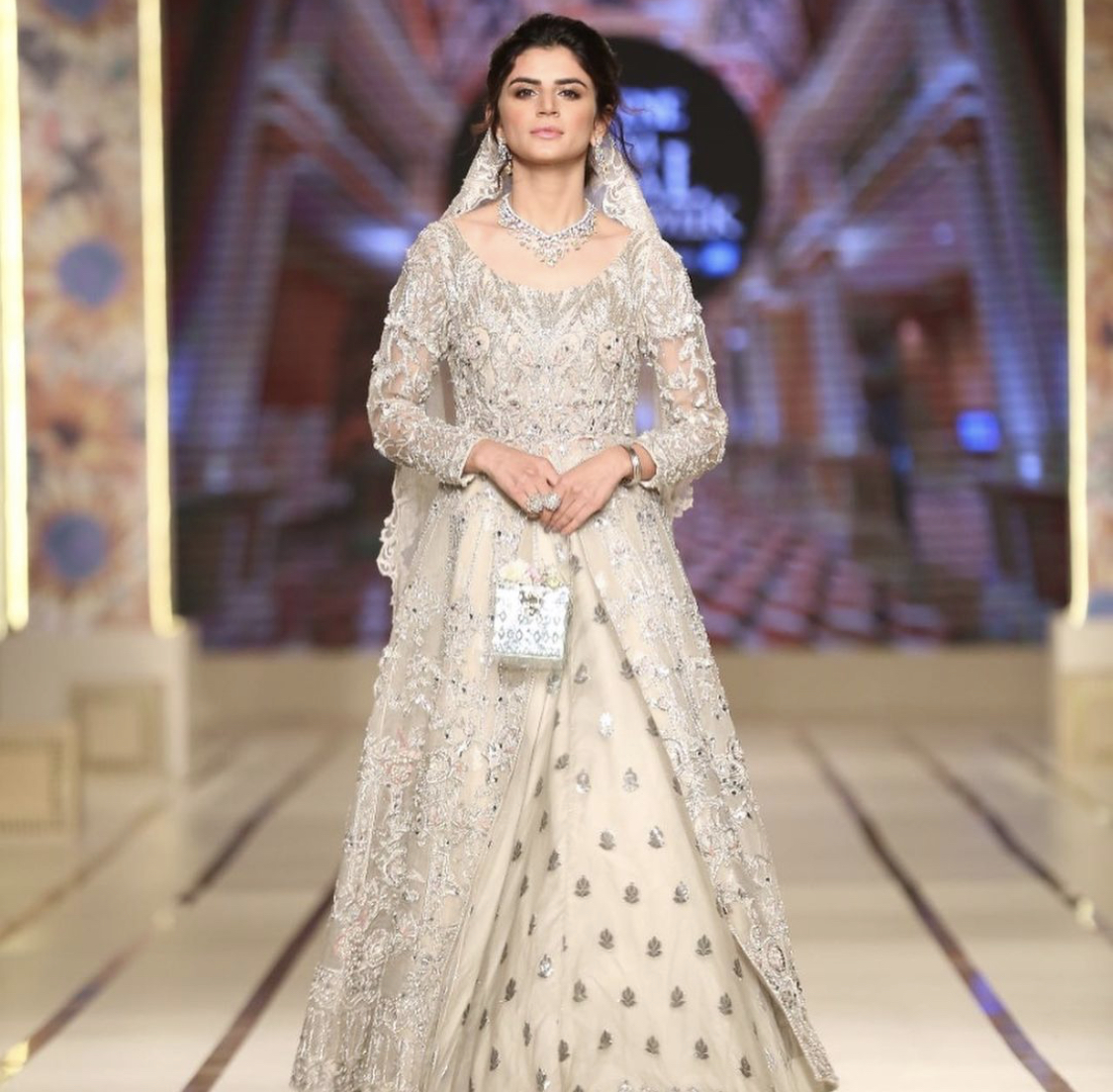 What do you think about these bridal looks? Considering the fact that all these models had the best designers to choose from and the designers had to showcase their topmost designs, all these looks just do not come up to the standards set by some of the other designers. Apart from this, the make-up artists could have done a better job because all these actresses have experimented so many times with different looks therefore picking an ideal look for the occasion should have been easier for them. Share your views.