As we all know Mehrunisa V Lub U released this Eid and the movie has been a hit as far as  numbers are concerned but on the other hand the movie straight up failed to impress many bloggers and audience too. Director of the movie Yasir Nawaz is not happy with the negative reviews Mehrunisa got and after not being able to contain his childish fit at trailer launch of Punjab Nahin Jaongi he posted this as an open letter to all the people who reviewed his movie. 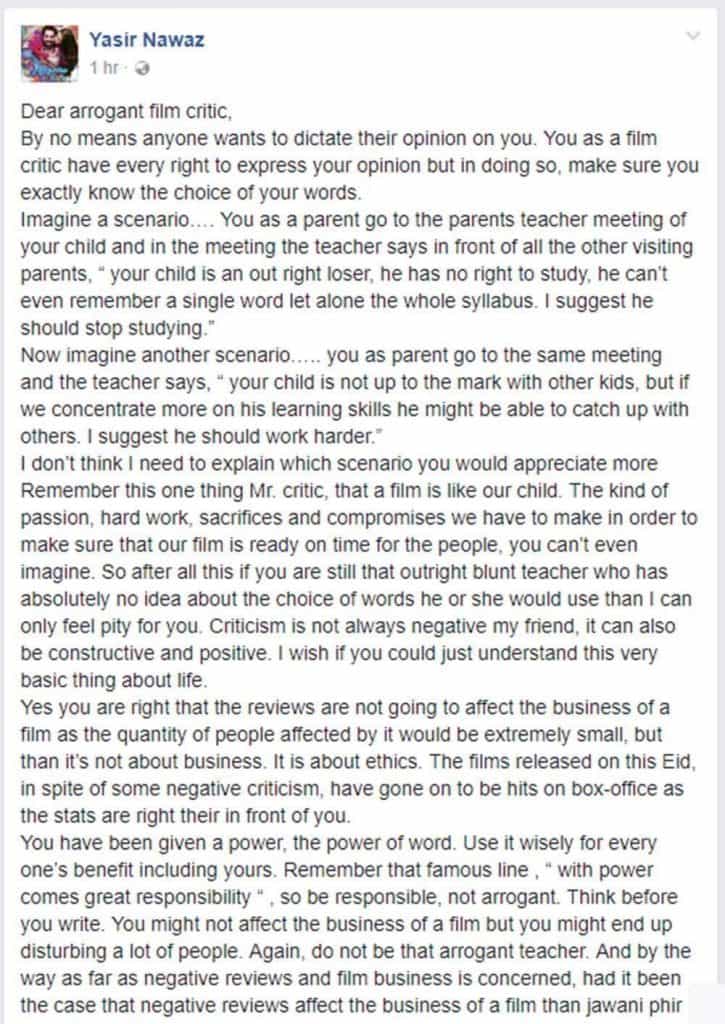 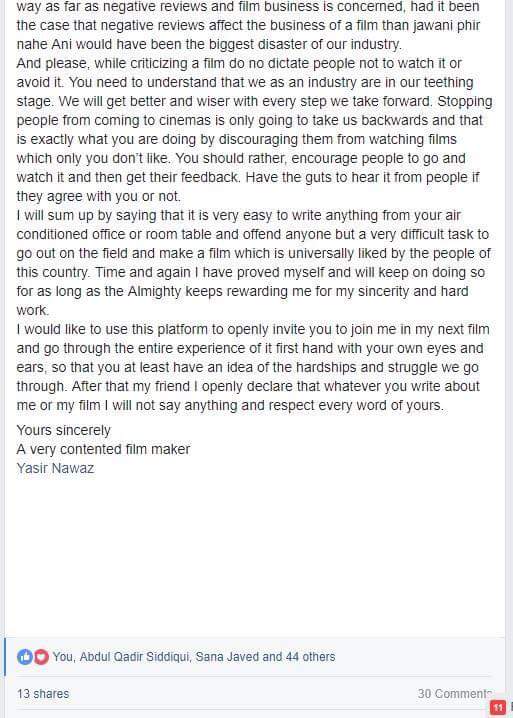 First of all as you are calling the critics and bloggers teachers, the first lesson is you should never disrespect the teacher by calling them “Arrogant”. Secondly one should never be such an arrogant parent that whatever your children may do you will defend them just because they are your children as this will turn them into some intolerable creatures when they grow up (considering your film is still a child this advice will help you a lot in brought up). Thirdly we know that it takes effort to make a film specially in the circumstances our industry is facing right now. Don’t you think that is the reason we give coverage to your movies? Write about them even if we are not down right impressed by them? You are a producer you know publicity is publicity; doesn’t matter if it is good or bad and Mehrunisa has got it whatever you may say now. Fourth you agree the reviews do not affect the money a film makes then what the whole fuss is about? Yeah I know film is a child but in the real world it was a business project and because it is earning all should be hail and hearty. Fifth and the most important you cannot go on making excuses forever that the industry is new so come, watch and support whatever is being made because the same approach led to the devastating Gandasa Era our industry faced. Films from all over the world get criticised. If you do not watch news let me tell you on the same Eid Salman Khan’s Tubelight has been crushed because of low quality script and has got real bad reviews too. Mummy faced the same fate and it was a hollywood flick. Now the power; you also have got the power to influence the audience with the use of your camera and characters, you should also learn to use it in a constructive way. At last I would like to say that this time when the industry will move forward and InshaAllah reach new heights; all us critics and bloggers will be there to keep on eye on the quality so we do not fall back to same pit we are trying to rise from and yes criticism is constructive for those only who know how to handle it and take it in a positive way!