Interview with Abeel Javed – Good food is a way to win hearts.

This article is translation of interview of famous cooking show host, Abeel Javed published recently in Urdu Weekly Akhbare Jehan. Abeel has shared some interesting aspects about her personal and professional life in this interview.

Abeel Javed is basically known for being host of a cooking show, and it is her major strength. But her beautiful personality and courtesy are the main qualities which draws the attention towards her within no time.

That’s why despite 1000 episodes of famous cooking show ‘Haandi’ on a private channel (Masala TV), she is still hosting it successfully. Reader may already knew that Mrs. Zubeda Tariq is the cooking expert in that show, with whom Abeel have great understanding, which is also an important aspect of this program.

Apart from other qualities, name “Abeel” is quite unique. Abeel told it is an Arabic word whose meaning is Success and Win. Born on 17th October, Abeel zodiac sign is libra. Probably that is why she has such a balanced personality. Telling about herself Abeel told she has completed education in textile designing and completed the diploma with distinction of third position.

On answering the question why showbiz instead of field of textile designing, Abeel told “actually I got work in a commercial and then I accepted an offer of live show from a channel, and it continued in a way that I am totally in showbiz field”

Why food channel? Are you fond of cooking? In response Abeel told “I accepted the offer being host, as the cooking is responsibility of cooking expert in show. At that time I even not knew about the names of masalas. But now after four years I have also learned how to cook well”

Any intention to become a cooking expert in future? “Neither such intention, nor any plan to do a show as cooking expert. I only like hosting” Abeel answered

As you said you have learned cooking and quite accomplished now, do you cook at home?

“Yes now I can cook all types of dishes. I try all the recipes which I like most” Abeel answered confidently.

When you do cooking there must be some hustle at home, that today Abeel is cooking food or you do it silently?

Abeel cooking is liked not only by her family but by her friends too. Since her parents are from Delhi she is now also an expert in cooking Delhi cuisine. Her favorite dishes are traditional desi food of Delhi, lasgne, pasta and noodles of every type. She can also cook these dishes very well.

How much glamour is necessary in showbiz? How much importance you give to glamour?

“Glamour is a must in showbiz”, Abeel answered instantly, “But there should not be any element of immodesty, glamour is not a bad thing, but consideration of our culture and values is also important. As far I am concerned I like being attached to my culture and always wear eastern dresses.”

Any preference in makeup? In response Abeel told that she likes light and natural makeup, and does her makeup herself.

On the question what are you plans for marriage, she told “Maybe soon you all will hear my wedding news as it is it my mother wish, but I am not yet engaged”. In this regard Abeel prefers decision and choice to her mother and wants to select her life partner as per her mother’s opinion. Abeel is second in total of four siblings. Her father is no more in this world, so she is quite touchy about her mother and wants to comfort her in all possible ways. On the topic of love she said “I have never experienced it, but it is a natural sentiment and I think persons in love with each other are ready to compromise for each other”.

Any plans to join acting field? In response Abeel said, “Acting is quite time consuming activity that is why I cannot afford to do work in dramas. I only like live shows in which there is no recording.” She further told “If I had a beautiful voice I may have been singing but in future I have plan to work in the field of textile designing”

Abeel has almost worked with all the famous chefs and all are her favorites too. But due to her long relationship and respect for Mrs. Zubeda Tariq, she considers her as the best cooking expert. She told. “It is due to Zubeda aapa that I can cook well today. She guides about all things in an easy manner that cooking looks very simple.”

Any tips for women who do cooking?

“I am not a chef, but I have learned many things since I am host of a cooking show for many years. First thing I will like to tell is interest and dedication is must to do anything. In start there must be some difficulty in cooking but your interest will make it easier. So cooking nihari or kofta is not difficult any woman can make it.”

Any common mistake which women generally do while cooking?

“Mostly housewives or girls learning cooking add more salt by mistake, so always add less salt and pepper. As it is easy to make less more, but there is a long process to make salt and pepper less. Also do not make too oily foods, try to add less quantity of oil in food.”

Soft spoken and soft hearted Abeel likes chit chat, but she is also an isolationist by nature and normally avoids gatherings. She said I like hustle bustle but I also like isolatation.

Her hobbies include reading mystery novels, watching horror movies, sketching, designing and cooking well made dishes. She said good food is a way to win hearts.

She considers wordings of Anwar Maqsood as best comments of her life which he said on completion of 1000 episodes of “Haandi” that “He has never seen any anchor of a live show speaking such clear and pure Urdu fluently.”

Her message for readers is “Cooking is not a difficult thing; it is an art so enjoy it. Also take care of your parents as there is no replacement of them in this world.” 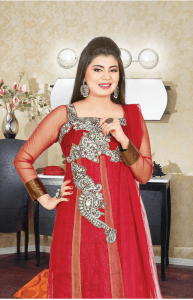 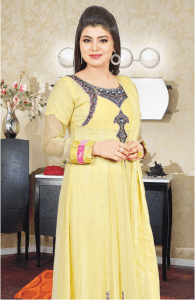 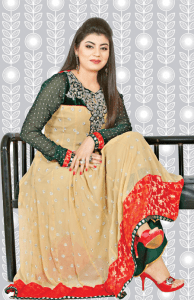 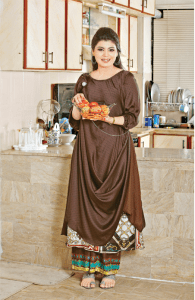