Interview of Yasra Rizvi – No intention of marriage, I am scared of cats

Interview of Yasra Rizvi has been published in Sunday Magazine of Daily Jang. It is translated for the readers of this blog. Interview and pictures courtesy of Daily Jang. Below is the translation of interview conducted by Ms. Saima Naaz in Urdu for Daily Jang.

Claim of versatility by many new and upcoming actors is like promises of politician with public during election campaign. But truth is what that is admitted by all, and the opinion of public about politicians is apparent in front of us. However in showbiz, it is true, many new actors are working here giving a fresh look to screen. But it is also true many youngsters are progressing by using glamour and technology. But..Yasra Rizvi is one of those actors who have made her place in the field of showbiz due to her quality work in quite short time. A confident and strong personality Yasra has performed a role in Geo TV’s drama serial ‘Virasat’ totally opposite to her personality. After doing a well performed comedy role in ‘Kis din mera vyah howay gaa’, she is now skillfully performing role of a grieved mother in Geo TV’s drama ‘Man ke Moti’ and receiving praise for it as well. Yasra is not only an actor, but she is also God gifted in field of writing and speech. Then why shouldn’t she be called versatile. Yasra is a pleasant edition to television industry and it is expected that her interest in films and its trends can play a role in betterment of our film industry. In recent days there has been an interesting conversation with Yasra regarding her private and professional which Is as follows for the readers.

Question: Tell us about your family and life.

Yasra: I am from Islamabad. I was born on 15th November 1982. My parents are also from the field of journalism. Mother used to write diary for Daily Jang Islamabad. I have only one brother who is also in journalism.

Question: From where you completed education?

Yasra: I have done BBA in Human Resource Management from Michigan University, USA and then Master in Mass Communication from Britain. Then my interest shifted towards films and theater and I tried to give a new trend to Urdu theatre and film with my writings.

Question: How was your childhood time?

Yasra: My childhood was in Islamabad. My house environment was quite literary, so I was interested in ghazal, classical poetry and poetry. I never done acting in school, but when I started writing , my family never stopped me, instead they helped me.

Question: From which field you started your career?

Yasra: I started my career as a writer and then came towards acting. For theatre my first written play was “Bench” which was in Urdu. It was a memorable moment for me, when after this play, when audience in theatre hall clapped for me. I can never forget that day.

Yasra; I am a drama writer and since my parents are also in the field of writing, instead of discouraging they encouraged me. I am inspired from the works of Anwar Maqsood and Munnoo Bhai. My own writing style is also a bit classical.

Question: Born in a literary environment, being a writer yourself, how you came towards acting?

Yasra: It was sudden. I was in Karachi, when I met few persons from Islamabad theatre over here. I presented my portfolio to them and they instantly called me. That drama was not worth mentioning but my character was appreciated. After theatre, Sabiha Somaar casted me in a small but powerful role in Geo’s drama ‘Mi Raqsam’.  I also did ‘Kis din mera vyah howay gaa’ on Geo. Experience of working in drama ‘Virasat’ of Geo was also helpful. Now a days I am working in drama ‘Man Ke moti’ on Geo TV.

Question: Being a writer and actor at same time, is helpful or harmful?

Yasra: Its helpful in every way. Being a writer I knew many problems of our society. I want whichever drama I work in, must have some message and objective and it would convey a message to public along with entertainment in an unfelt way. Drama or showbiz is not only entertainment but is also a necessity of our society. Entertainment is still limited to television for a large population of our country. Television can be very helpful for awareness and consciousness for those people. Whether writer or actor I think both must have good observation. I use observation in both writing and acting, due to which understanding and performing a character becomes easier.

Question: What’s your opinion about theatre?

Yasra: Theatre is a quality entertainment but sadly Urdu theatre has almost ended in our country. Quality of Punjabi theatre is very poor. Our youth has done very hard work for Urdu theatre. Recently the success of ‘Aangan Terha’ has set a new trend and I feel very happy to see a theatre prospering again.

Question: Any message for current youth

Yasra: Our youth do not read classical history, books or go to library; they are not familiar with dramas of Imtiaz Ali Taaj. I feel sorry for that. I want youngsters should also focus on this.

Question: Which type of role you want to perform in dramas?

Yasra: No special preference for characters, I believe in versatility. Performing roles of same type is like death of an artist for me.

Question: Any interest in music

Yasra: I am inspired from legends like Noor Jehan, Fareeda Khanum, Nusrat Fateh Ali Khan, Ghulam Ali, and also like to listen to them.

Question: Youngsters of every era want to join showbiz what is your opinion on it.

Yasra: I think if someone has talent, nothing in the world can stop him/her for making name. As compared to past now youngsters have more opportunities. There are many television channels and radio station, but talent is must.

Question: What is your opinion on ongoing trend of ‘Remaking’?

Yasra: Remaking of films is a good thing. New generation knew about their heritage by this. But presenting old films in new style is not sufficient; there must be new films as well. In India film is a profession of many people, if film making starts in our country it can provide work to many houses.

Question: Many new artists frequently complain regarding no support from senior actors, how is your experience?

Yasra: Attitude of seniors has always been good towards me. If a junior is arrogant and ineligible no one teach him/her. I think nothing could be more encouraging then praise from a senior.

Question: How was your journey from Islamabd to Karachi?

Yasra: Karachi is an excellent city. Life continues here despite terrorism incidents. If anyone wants to work or make career here, both this city and its citizen are extremely helpful’

Question: When will you get married?

Yasra: Everybody gets married, if I don’t it will be an individuality. So I don’t have any intention for getting married.

Question: You are quite sensitive about film industry, any plans to make a film in future?

Yasra: Definitely, there is strong plan to make a film. Film is quite demanding thing, so am working patiently. I want to make a film, in which dressings, language, environment everything is a representative of our country. Film must be close to reality. If film is Pakistani, then it must take care about our values. Making such film is my dream which I will make true in near future.

Question: If there is one principle for a successful life, what should it be?

Yasra: “Hard work” is the only principle for a successful life.

Question: Which is your area of interest and which areas you dislike?

Yasra: I watch television with great interest. I can do cooking, but no special interest in it. Politics is so much discussed in my house that I have no interest in it. I am quite social; all my past friendships are still active. I easily intermix with others. I don’t like getting up early, but now have to do that.

Question: Which area you will like to work in future?

Yasra: Film writing, production and direction, I will focus on all of these.

Yasra: Oh, I am scared of cat, and I don’t dine outdoors due to this.

Question: It is said, there is a woman behind every successful man. Do you believe it?

Yasra: Whether man or woman, there is a support system behind every successful person. There are sincere persons who encourage them.

Question: What is your message to those who want to join showbiz?

Yasra: Like all other fields you have to work hard, if you want to earn fame in showbiz. Teamwork and cooperation will result in your success. 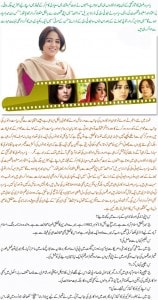 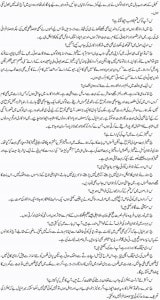 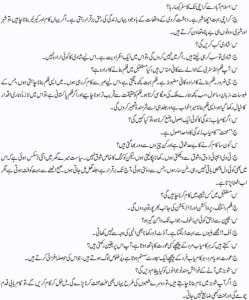