Ahsan Khan Was Overwhelmed On Praises Of His Biggest Fan

Celebrities are very close to their fans hearts. That’s why on seeing their favorite celebrities, people just loose it. They don’t care if the celebrity is with their family or busy or anything because they are not thinking straight at that time. People just rush to them to say hi and most importantly take a picture with them.

Ahsan Khan has been associated with the industry for quite some time now. Recently Ahsan Khan came in Ek naye Subha with Farrah, a show for his birthday celebration. In the show, a girl from audience was screaming and all. So Farrah told ahsan that this is your biggest fan. That girl was really overwhelmed to see ahsan. She started telling him that how she likes him a lot. The girl next to her said she is not the only one. I am your huge fan as well. This led to a competition where they both had to praise Ahsan to prove that who is more of a fan. 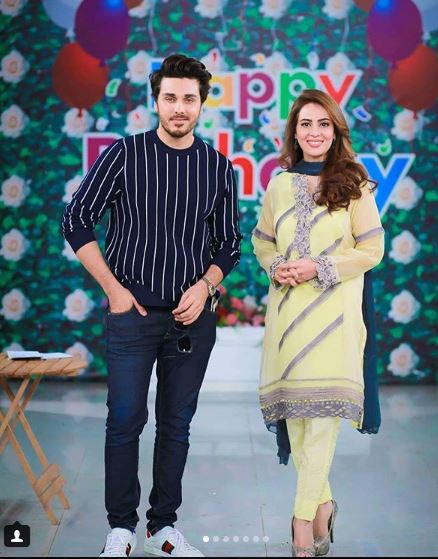 They started with his eyes to his hair, his complexion, the shirt he was wearing and all, Ahsan was just bewildered to listen to those girls praising him like anything but he was also humbled by the love and support.