Amir Liaqat has recently got involved in twitter exchange along with Adnan Sami khan. Adnan Sami khan retweeted a random tweet of a pakistani guy who said that ask from Abhinandan how was the tea and in reply to that Adnan Sami tweeted that.

“Yes.. He went… shot his identity and spit on the graves of his forefathers had a betrayal drink.. got hatred from Pakistan .., Fool”

“Only a pimple of an existence like that would derive this from it’s unimaginative pedestrian molecule of a mind which is why you lead a pathetic life eating off others name in order to seek validation of your otherwise non consequential self!Enjoy!😄”

” Only an abcess filled with the pus of hatred and narcissism would’ve  to write gibberish all the time to seek validation & prove his patriotism all the time, your TL is more about Pakistan than your ownself so we all know who is living a pathetic life.I know you’re undercover 🤫 ”

” My frustrated eunuch!Actually you’re the breaking out of a rash on mucous membrane,disease is incurable,you are suffering from Identity crisis that’s why doing weird things.I don’t know which part of your body is suffering from pimple kapadia &why she is erupting again and again? “.

Well it all started from a random tweet and the drama got worsen when Amir liaqat couldn’t bear Adnan Sami’s false statement about Abhinandan shot dead f16, obviously this fabricated story put every patriotic pakistani in rage as there is no such thing happened ever.

Amir liaqat has said he (Abhinandan) came to Pakistan and lost his identity and earned disrespect for his countrymen drank tea and went back. He also said that you have lost your identity and that is the incurable disease you are suffering from he also  said that don’t know which part of your body is suffering from pimple kapadia and it was a clear jab at Adnan Sami well it for sure shows we have many twitter defenders and are currently active.

Mehwish Hayat, Veena Malik, Faysal Quraishi Amir Liaqat and Armeena Rana khan from media fraternity are not quiet at all when it comes to Indian wrath, hatred and obnoxious propaganda. 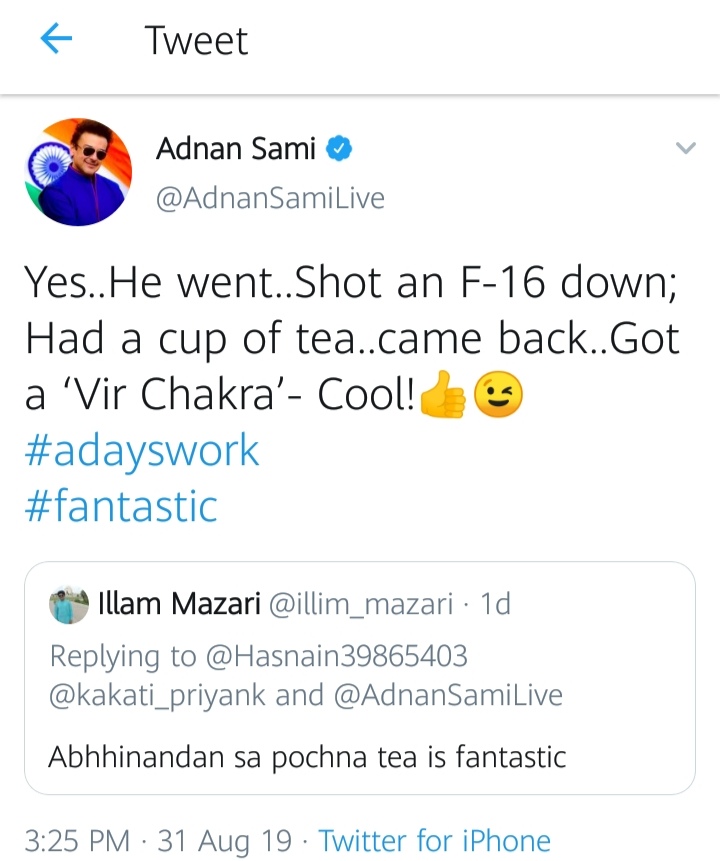 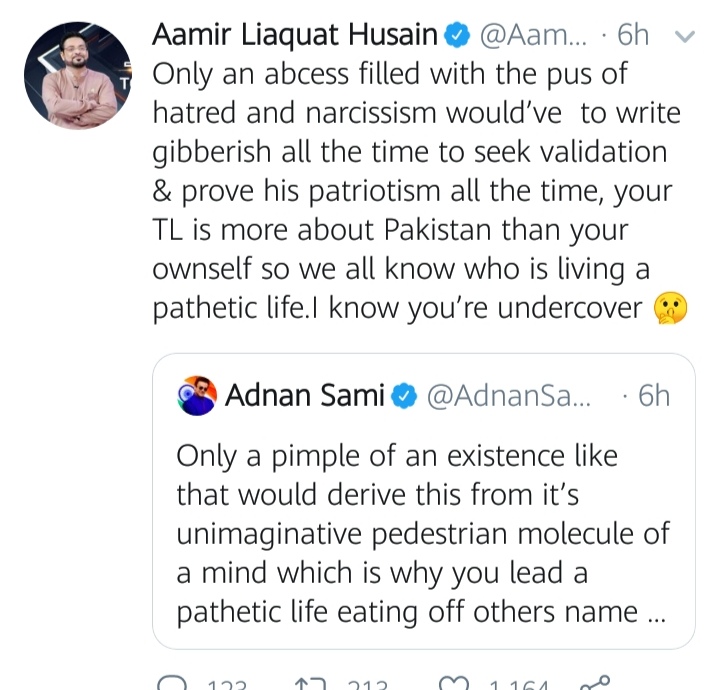 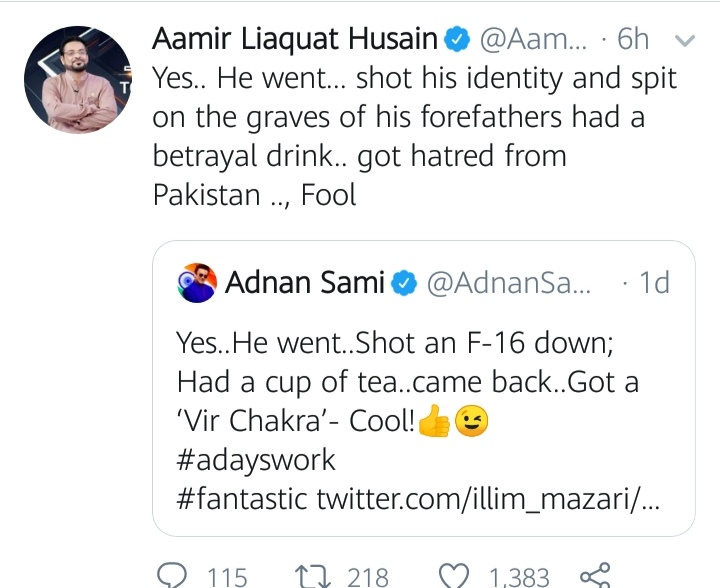 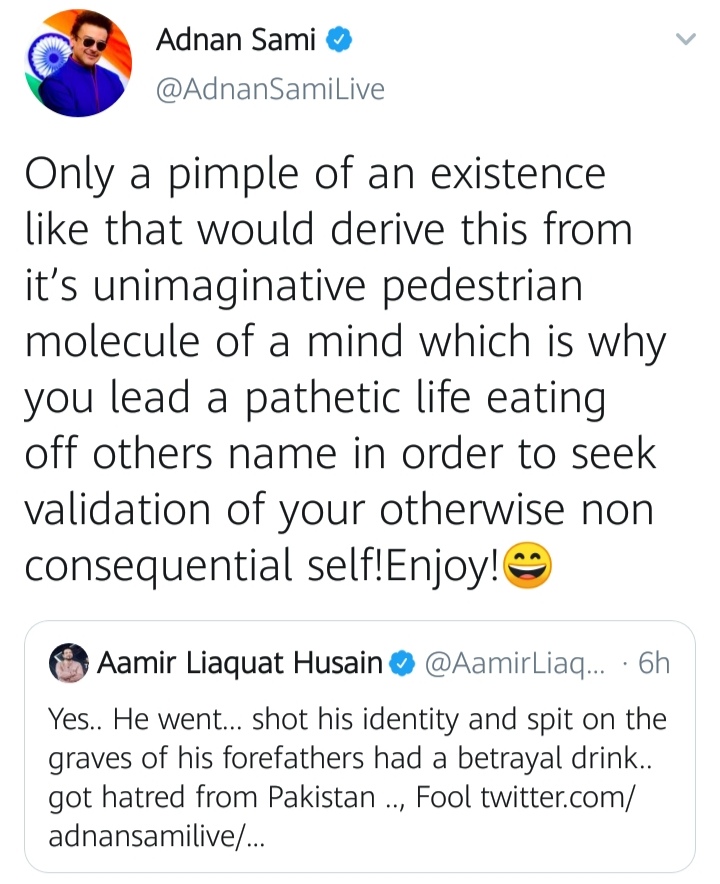 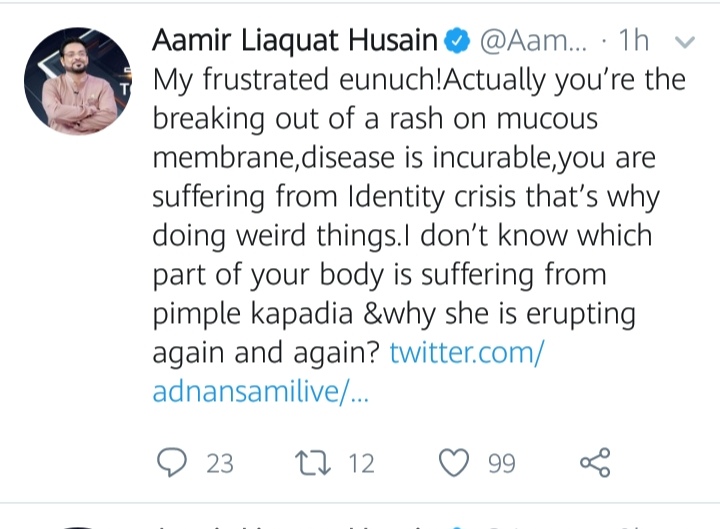