Anti Taliban Facebook Pages Blocked On Request Of The Government

According to the latest news there are many facebook pages that openly criticize Talibans. Few of such pages were blocked by the facebook administration on request of Pakistani government. Laal is a band which has always been very vocal about anything which they see wrong with Pakistani system or politics. Their facebook page has more than 400, 000 likes, it is a forum where people join together to debate about issues that are usually brushed under the carpet by many.

The band openly criticizes Talibans and there are very often talks about the double standards that exist in Pakistani politics and society. The progressive people in the country feel that Laal represents them. Along with Laal several other pages like “Taalibansarezalimans” (The Taliban are oppressors), Taliban are zaliman and “Pakistani.meem” which have been blocked in the past few days.

Many activists think that this is highly unjust and some people have termed it as the “mass murder of freedom of speech in Pakistan”. The authorities concerned are not taking any responsibility for their actions. 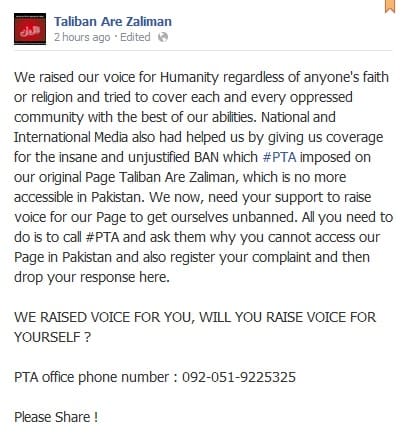 After the news was made public, the pages were unblocked. According to the news there was a secret agreement between PTA and facebook.