The audience of Pakistan is found all bind with the two drama channels majorly these days, to be specific, HUM TV and ARY Digital, which too are making the full use of the opportunity and coming up with hit drama serials back2back.

One of the most eye-catching drama serial on ARY Digital these days is Shehr-e-Yaaran which is a beautiful write up of Riffat Siraj and was previously dramatized under the title of Tawaan.  The direction is been done by Mohammad Iftikhar Iffi while the production is done by Six Sigma Productions. What makes this drama amazingly appealing is its cast which includes Firdous Jamal, Abid Ali, Agha Ali, Ushna Shah, Kaif Ghaznavi, Saadia Ghaffar, Diya Mughal, Shaista Jabeen, Yasir Shoro, Mehak Ali, Shaheen Khan and others. The drama is basically a daily soap that goes on air four days a week that is, Monday to Friday. 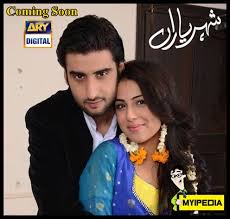 Agha Ali, an emerging actor in the drama industry is now all known for his absolutely great acting in some hit dramas like Teri Nazar, Main Haari Piya and Halki Si Khalish, will be seen in a lead role coming up with a new shade of his acting skills on ARY Digital. It is quite long to have seen Abid Ali on screen, so for his fans, it’s a wonderful news to have him back again on TV.