Indian ban on Pakistani artists has taken another ugly turn, in this episode of “Screw You Pakistan” the Baaghi 2 Production team has de-credited Atif Aslam of the song HE LITERALLY SANG.

#India’s ban on #Pakistani artists has taken an ugly turn! #TSeries, an #Indian #Bollywood #Music Production Company has REMOVED #Pakistan’s Pride #AtifAslam’s name from the credits of the song #OSaathi he sang for the movie #Baaghi2! The movie stars #TigerShroff & #DishaPatani! 🇵🇰⚡🇮🇳 #Dance

Ever since the ban Atif Aslam refused to promote the song ‘O Saathi’ which makes perfect sense since as an artist it is thoroughly disrespectful to get banned like that and the composer of the song Vipin Patwa supported the singer by saying,

“Aslam was taken on board because his voice matched the character of the song. The decision was taken way before the controversy started. It’s a coincidence that this controversy has started at the time of my music launch. Which artist wouldn’t want to promote his work? If Aslam has taken this decision, there must be some reason behind it.”

“If Aslam has taken this decision, there must be some reason behind it.” Vipin Patwa 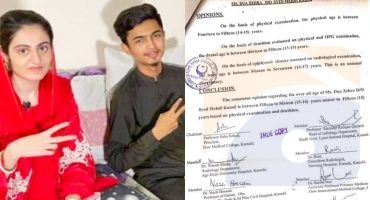