In the previous episode, Maria had hired a private investigator to spy on Nabeel. He had found out that Sumbul was an opportunist who had previously worked her way up in a similar fashion by charming her bosses. After getting hold of her photographs with her ex-boyfriend, he blackmailed Sumbul into meeting him. When Sumbul saw him, she realized he was posing as Nabeel’s chauffeur all this time. At first she tried to play tough but once he threatened he was capable of murder, Sumbul didn’t take any chances. She succumbed to his demands of taking a payout in exchange for leaving town, giving up her sim card so she would not be contactable and wrote her resignation letter accusing Nabeel of workplace harassment. Well played, Maria. This woman knows how to keep her man in line despite her handicap! I like the actor playing the role of the PI- he’s such a natural, it’s almost as if he does it for a living! Samiya Mumtaz is absolutely brilliant as the blind wife who wouldn’t allow her husband to get away without a fight. 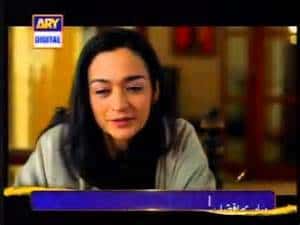 Dania is getting anxious over her secret affair with Babar and deep down knows he will never take a stand for her. Yet, she continues seeing him, hoping for some sort of a miracle since she’s so frustrated with her engagement to Naeem. She feels guilty for deceiving Sobia and hates lying to her mother. In fact a part of her even feels bad for Naeem- she isn’t entirely evil but her desires for happiness and a better life overpower all other feelings. Saba Qamar’s character is very similar to that in Maat with the exception that she does seem to have a hint of a heart! 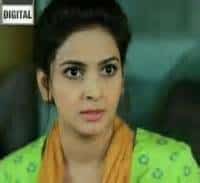 Babar is taking full advantage of her vulnerability and is exploiting her for his own interests. I seriously doubt his sincerity- he’s miserable with his engagement to Sobia but lacks the guts to break it off and face the music. He would rather continue leading Dania on as she’s willing to believe in him. Agha Ali is quickly becoming typecast as a frustrated lover who never gets a break. 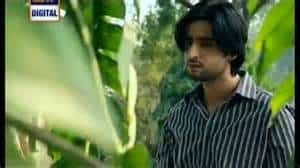 Nabeel was shocked at Sumbul’s sudden change of heart and quick disappearance. He managed to trace the number of her roommate Saba and went to ask her if she knew of her whereabouts. Saba clearly wants no part of this mess and subtly mocked him for being stupid enough to fall for someone like Sumbul- the lady was nothing but a social climber. Nabeel feels incomplete and miserable being married to someone like Maria who is handicapped yet his conscience reminds him that he opted for a get-rich-quick route by marrying her. He knows only too well that the downside to leaving Maria would be to return to his old lifestyle- where he worked hard to earn a living and still barely made ends meet. He will have to keep up the devoted husband act so he can enjoy the luxuries that he acquired through this well-planned reunion. Nauman Ejaz has nailed this role as Nabeel although I wish he would quit stammering ever so often.

The preview for the next episode seems very interesting- I am eagerly looking forward to next week’s episode. Have you watched this episode? What are your thoughts?