Mayun is an important part of wedding festivities in Pakistan. It is usually the first formal wedding function in which the bride prepares for her big day. It is like a warm up and also a way to get family gathered for the wedding festivities. While many girls prefer mayun which is simple because after that Mehndi, Barat and Valima are to follow. But nowadays, most of the brides celebrate their mayun just as formally as they do other functions. While there were some celebrities who kept their mayun look simple, many others made sure that they celebrated this day just as formally as rest of their wedding festivities. Mayun is a way of announcing that the bride and groom are now officially relieved of all their other duties and their friends and family will start giving them the special treatment which they deserve since it is their big day. Applying ubtan is also part of this mayun function but it is mostly about singing songs, dancing and just generally a family get-together in which everyone has the best time. Unlike the barat and valima, mayun is not very formal therefore it is more enjoyable.

Aiman Khan had the most elaborate wedding functions and her looks for all her wedding festivities were beautiful. Aiman Khan wore yellow on her mayun just like all the other celebrities in the list. Unlike some of the other celebrities, she did not only use jewelry made from flowers but she wore relatively heavy earrings which went well with her overall look. She used some flowers in her braid but not in the traditional way in which flowers are usually used to decorate hairstyles for mayun functions. Her Mayun dress was designed in a traditional way and she looked gorgeous in it. Aiman Khan wore a gharara for her mayun which she carried with style. Her styling, make-up and dress made her overall one of the best formal mayun looks of Pakistani celebrities. 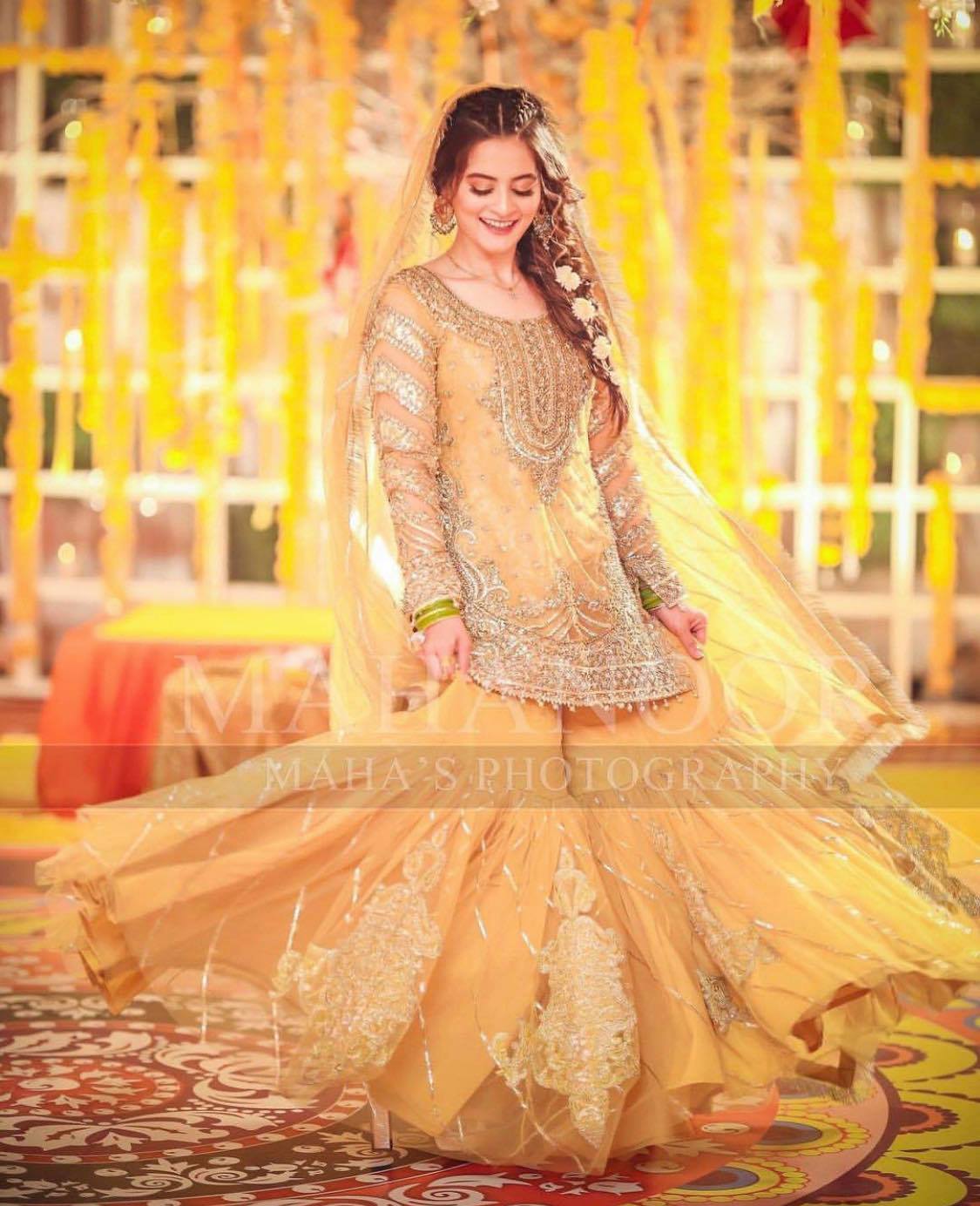 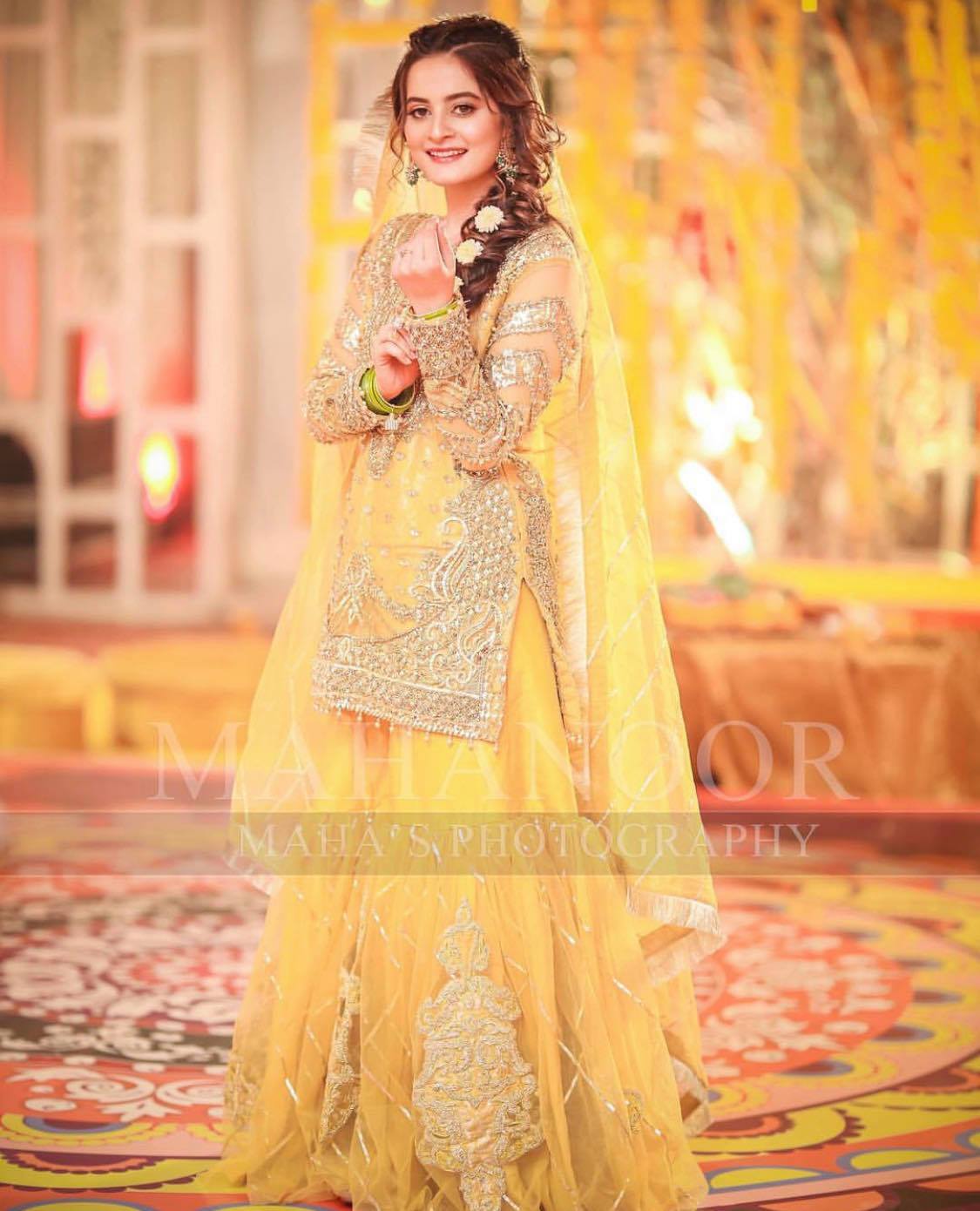 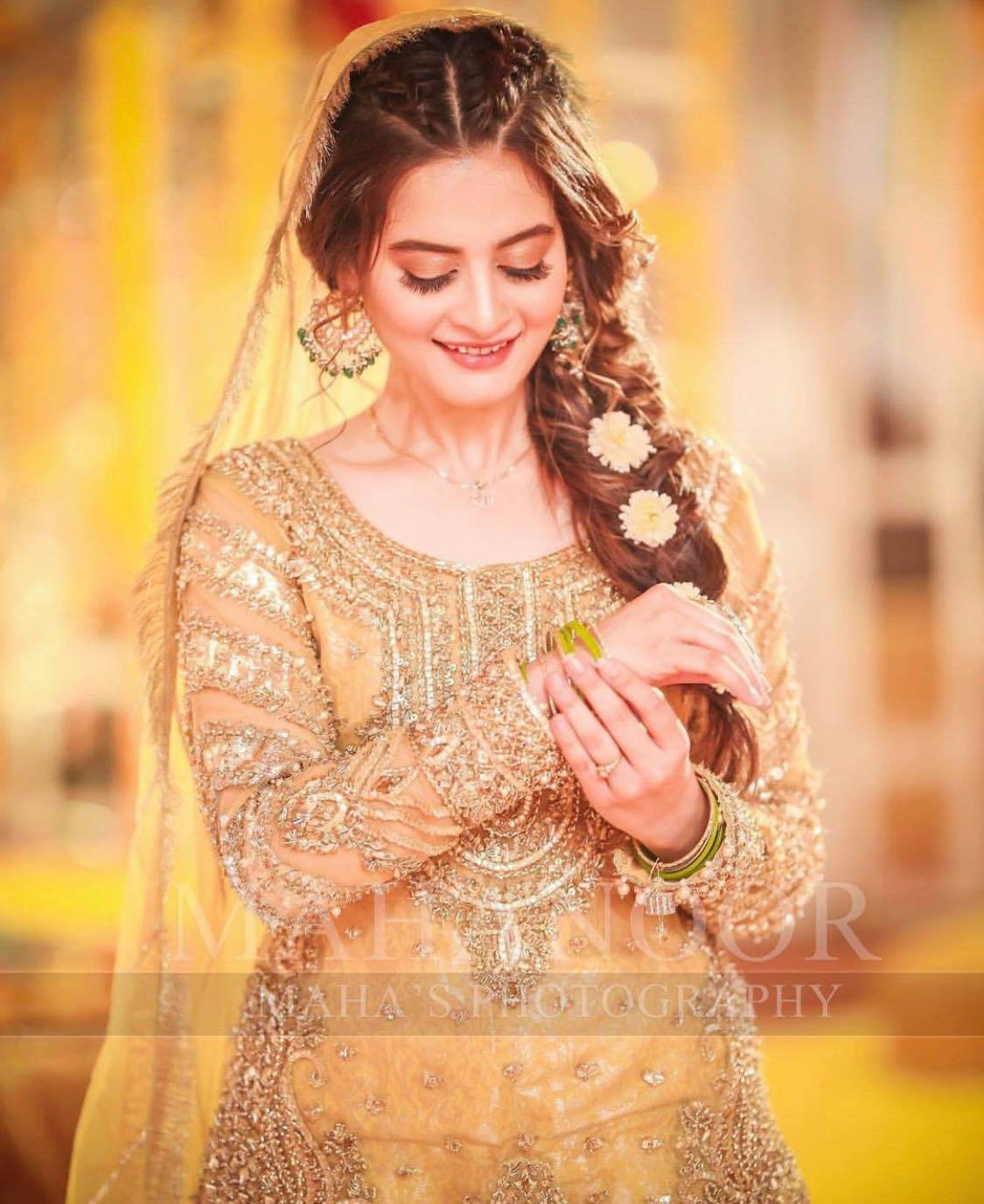 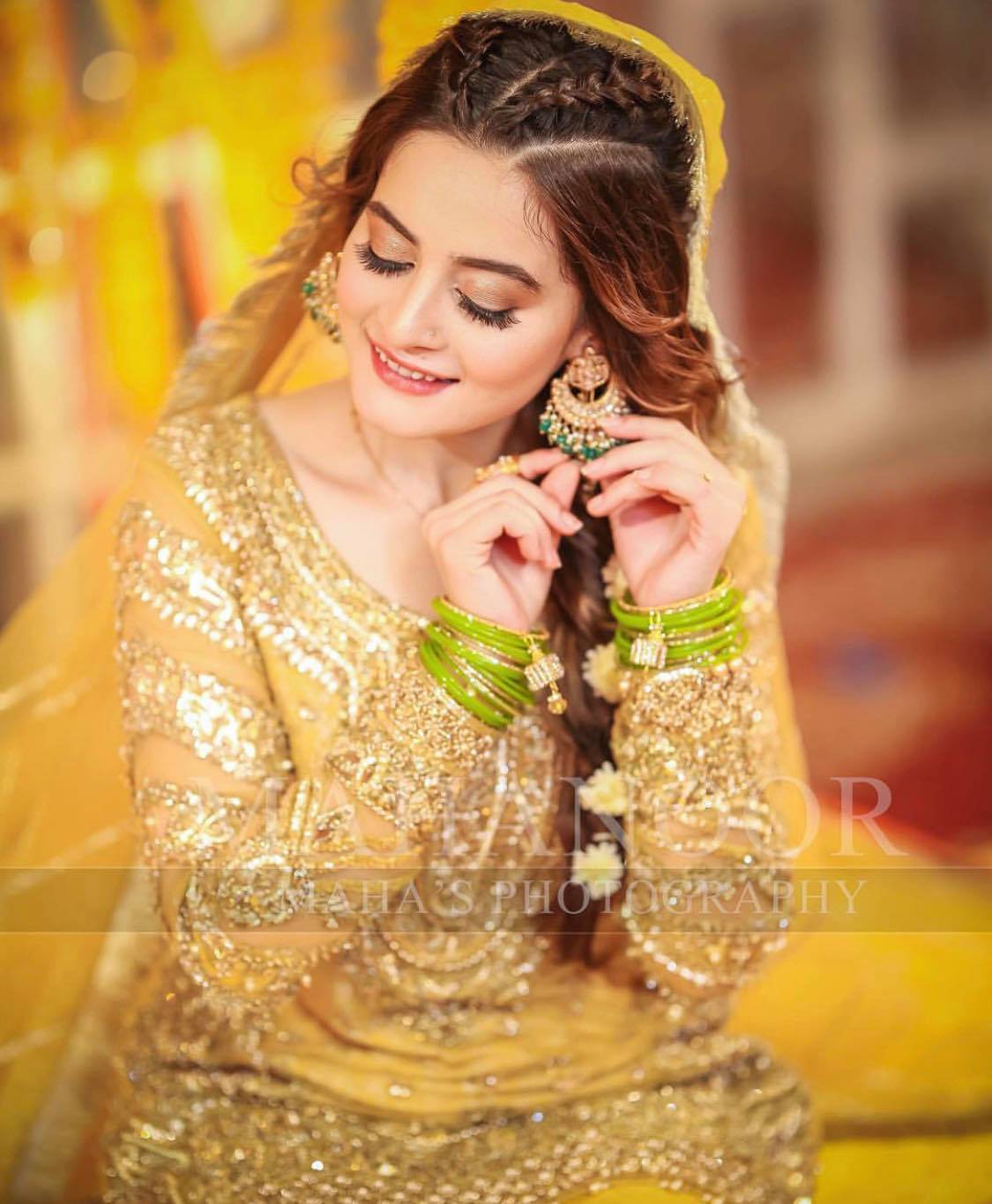 Saniya Shamshad made sure that she looked extremely gorgeous on all her functions. Her mayun look was perfect and one which any girl can sport on her mehndi as well. Saniya Shamshad wore a dress which wasn’t too heavy but it was designed beautifully. Her outfit was the perfect shade of yellow, bright and vibrant. Her hairstyle and make-up looked like it was a labor of love. Saniya Shamshad’s stylist used a lot of flowers to decorate her braid. She did not wear bangles but preferred to wear garlands. Her make-up artist used beautiful yellow eye-shadow and nude lips but added enough color on her cheeks to give her a more fresh look. Saniya’s pink nail paint also looked pretty. 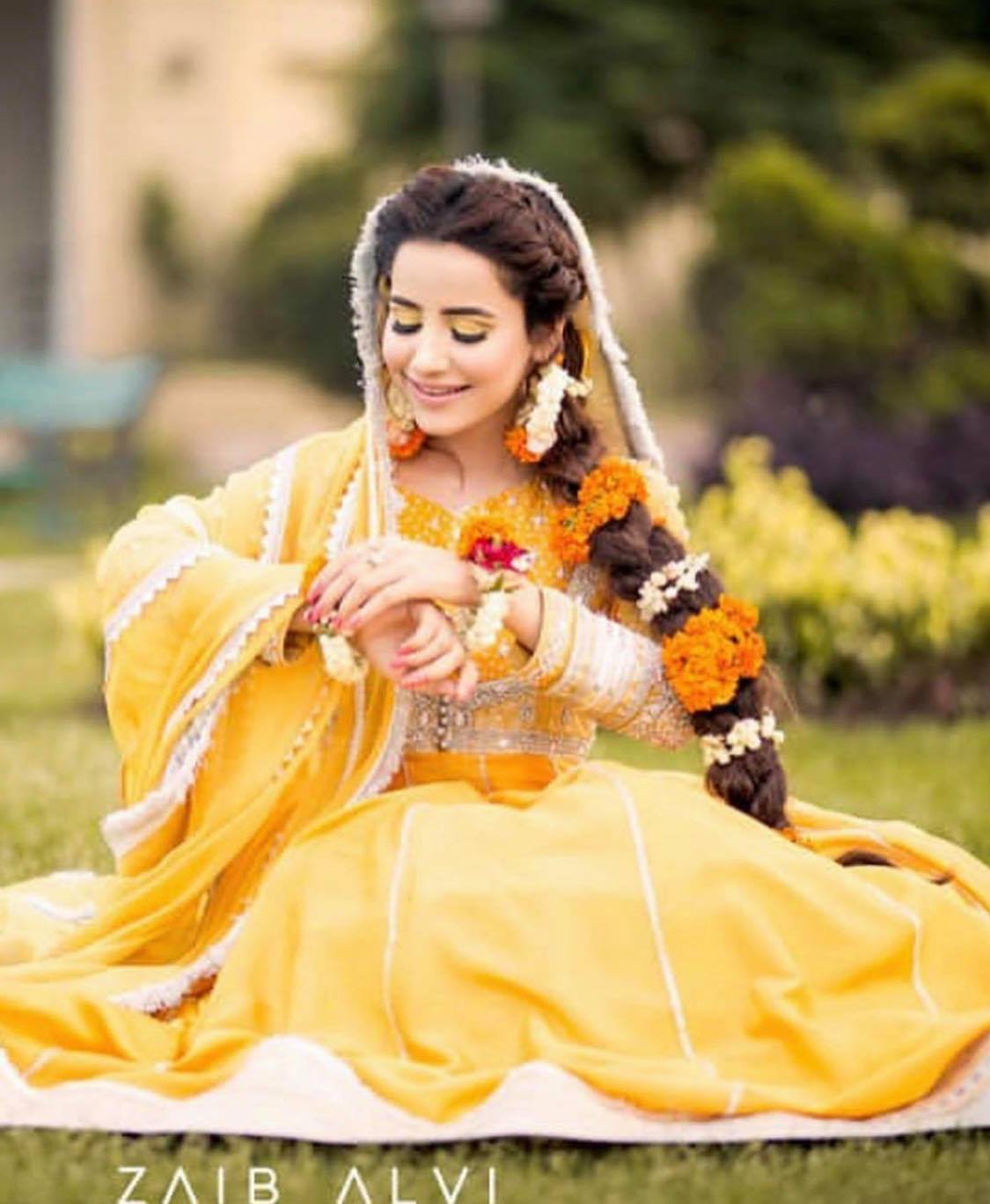 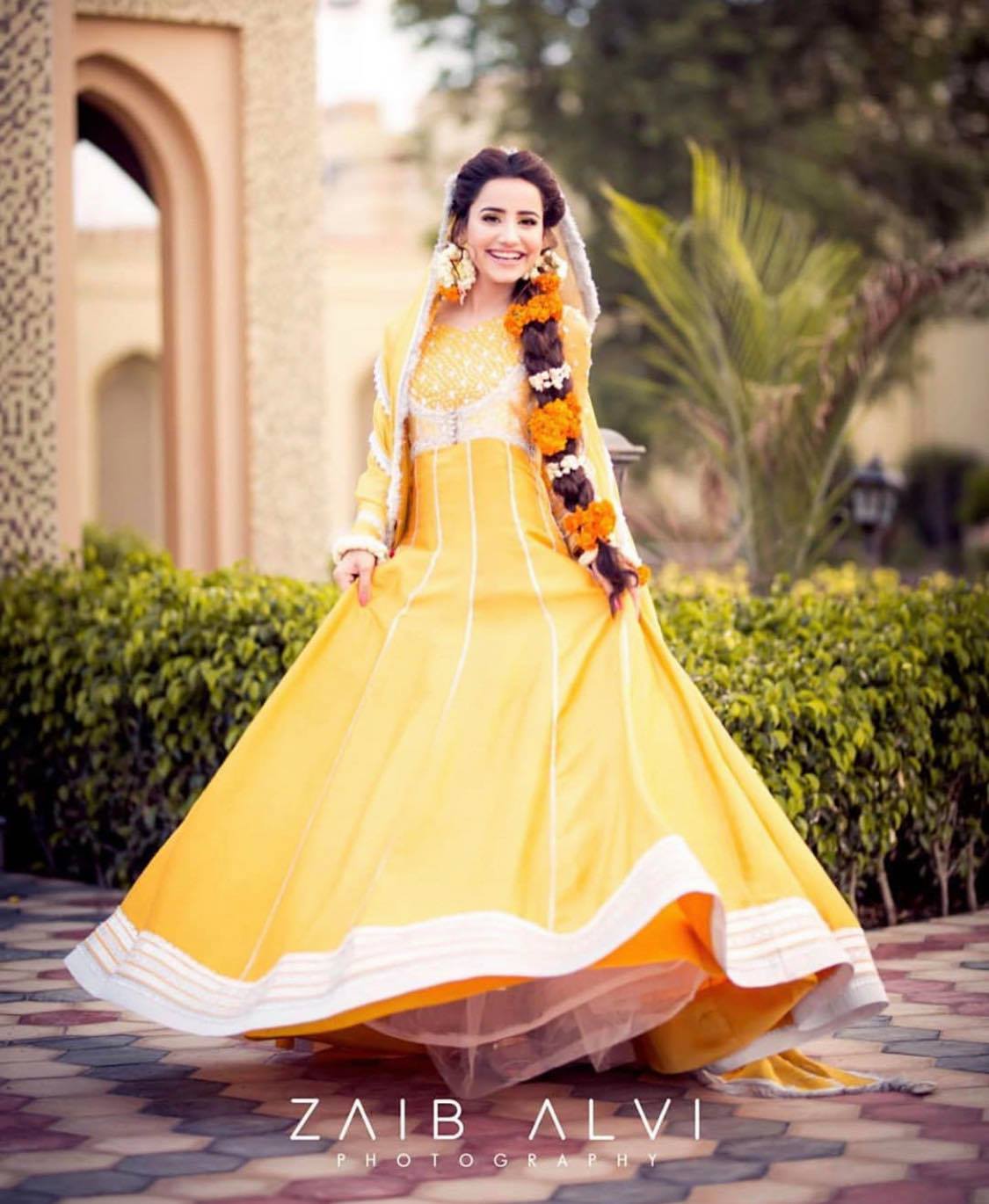 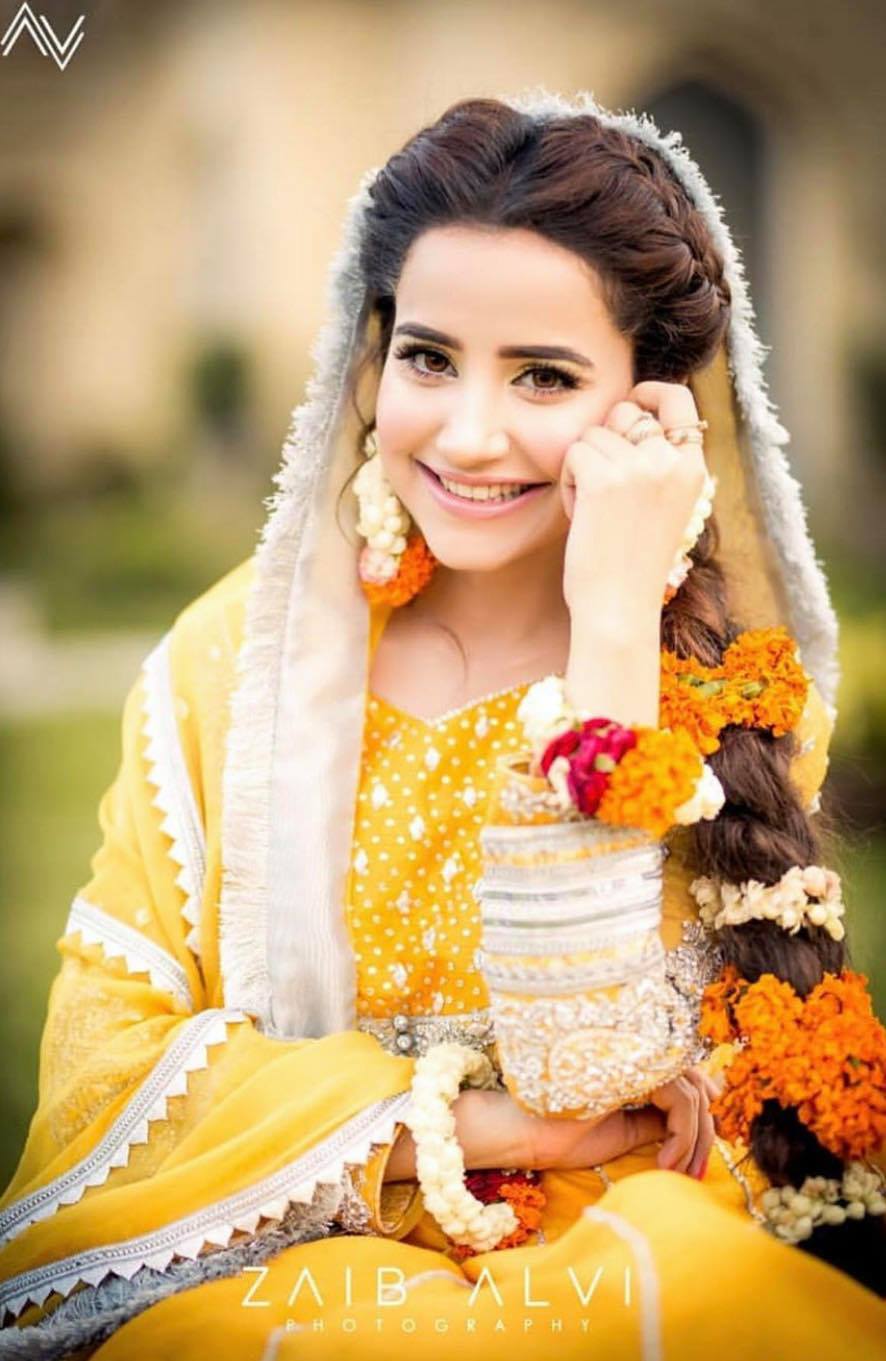 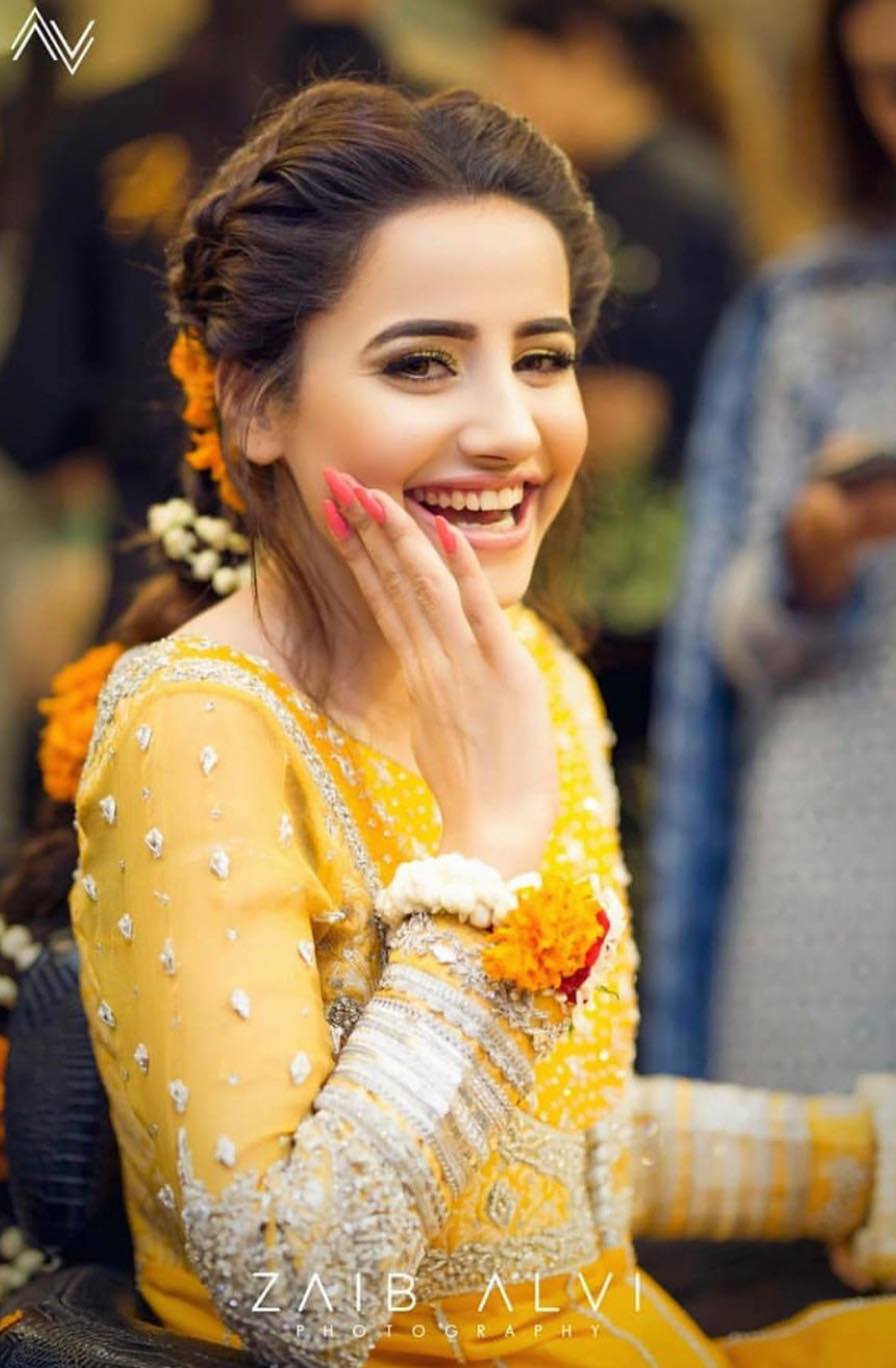 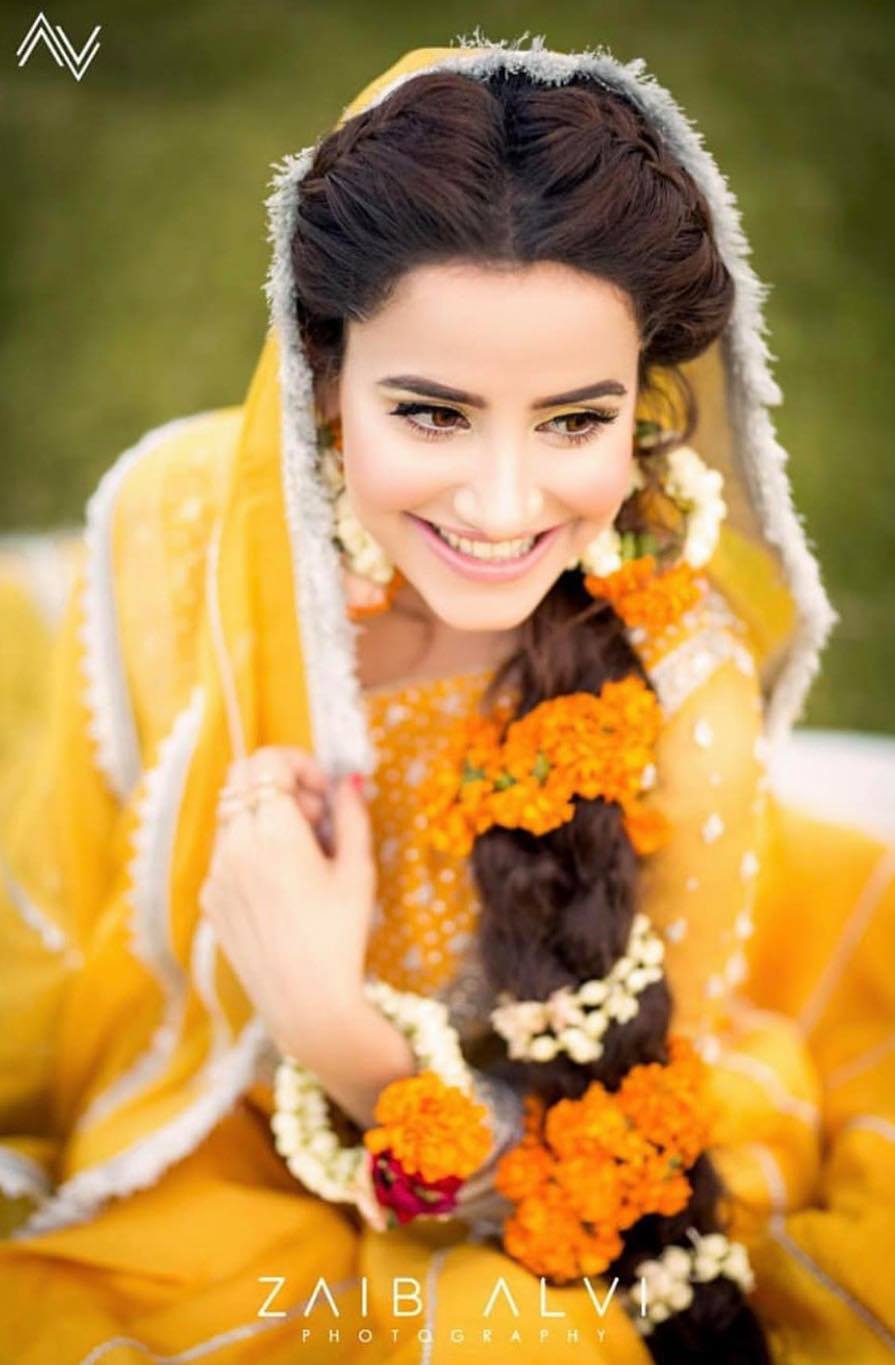 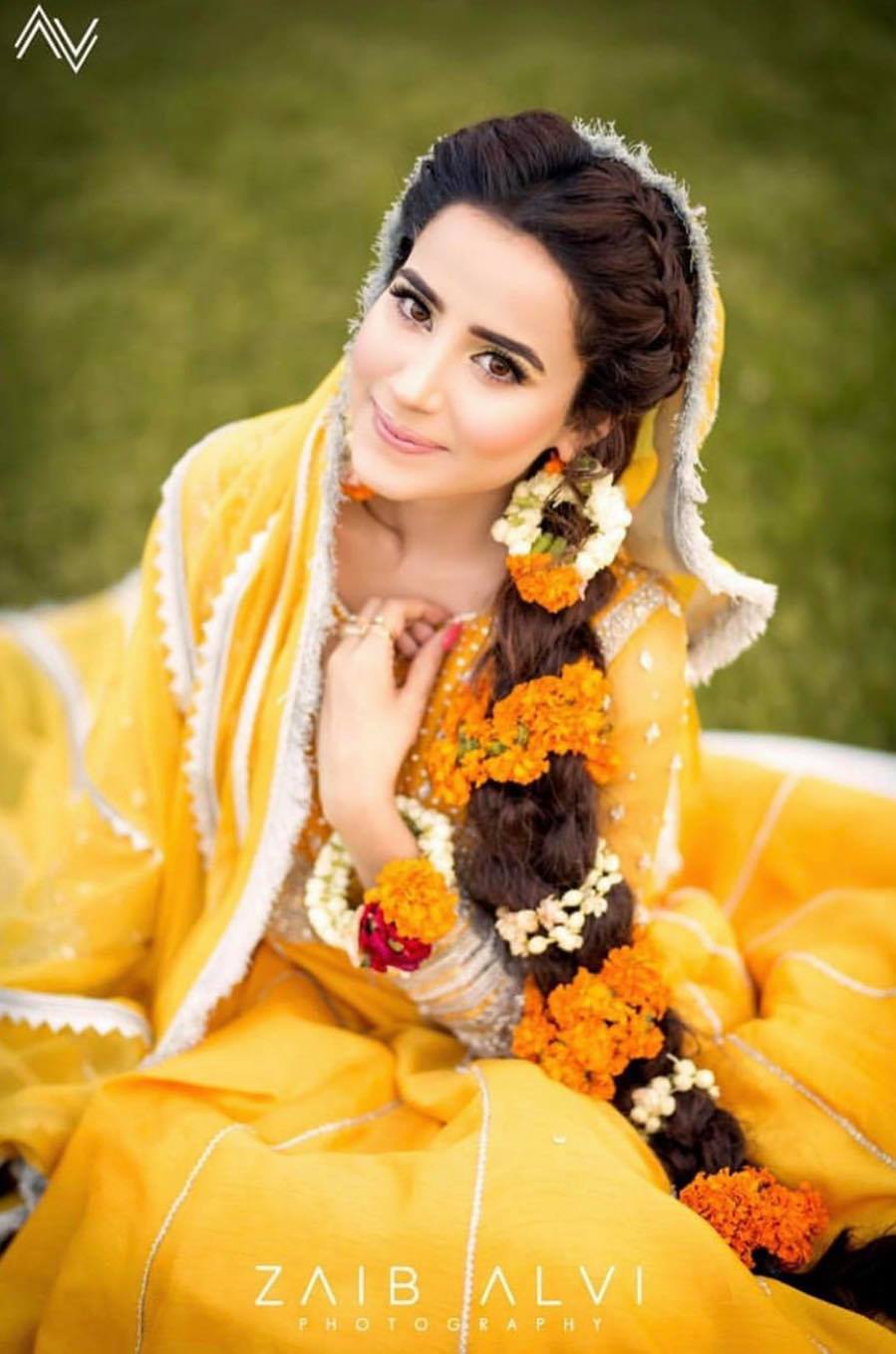 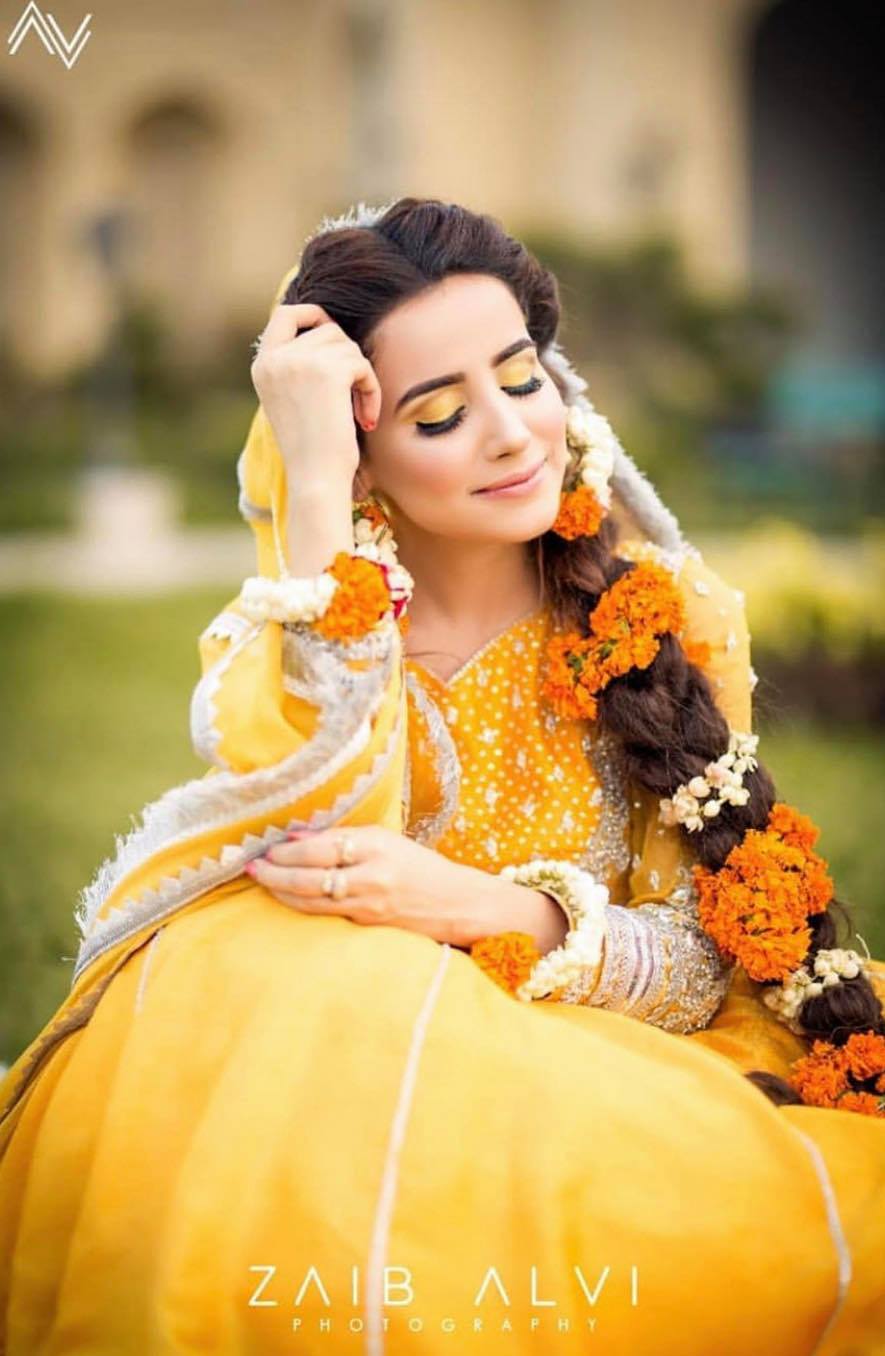 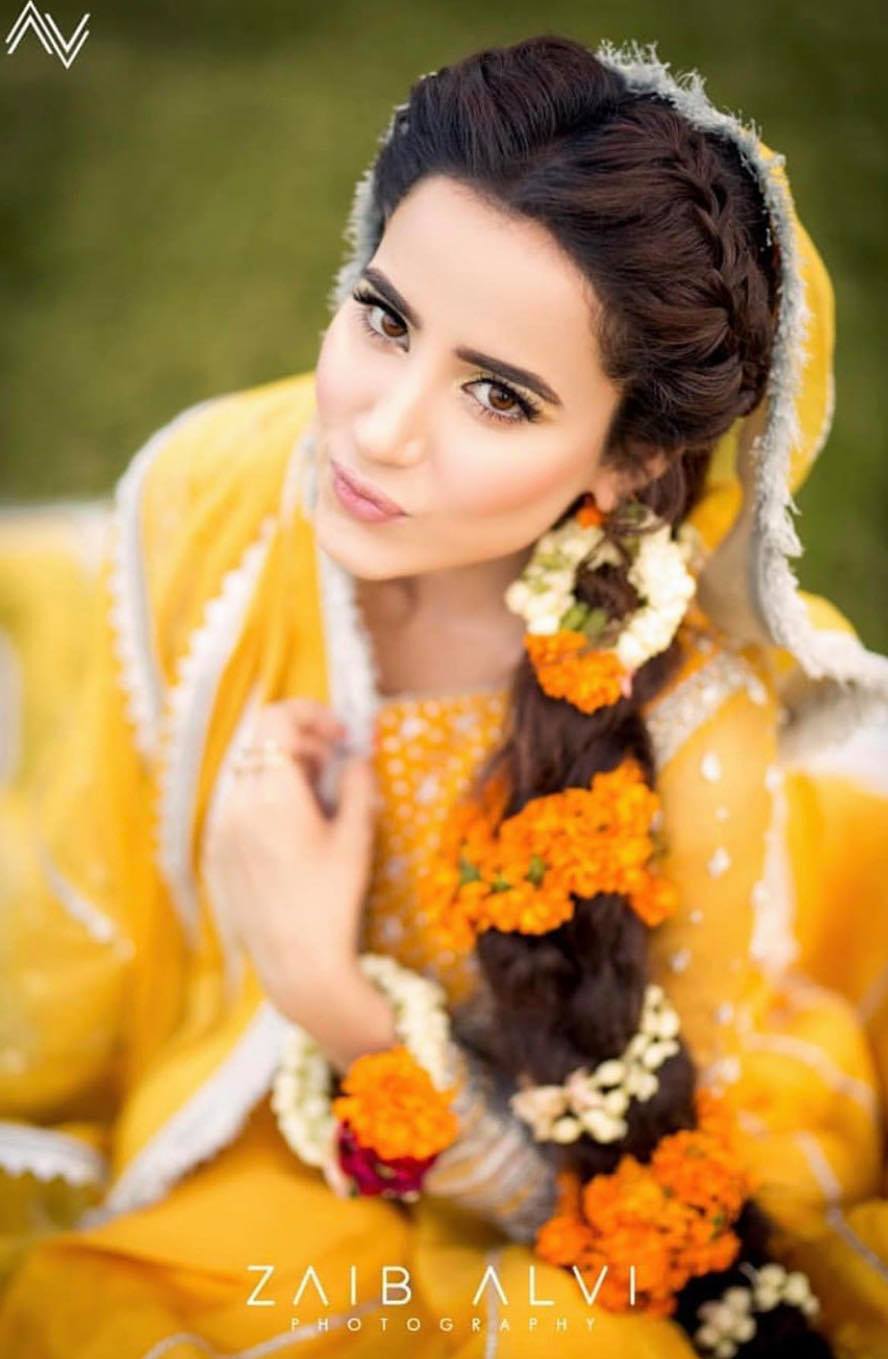 Aisha Khan kept her mayun look relatively simple. From her dress to her make-up, she preferred a minimal look for her mayun which is usually how a mayun bride would look like. Although she did wear proper make-up but it was only used to accentuate her features. When Aisha Khan entered the hall, she covered her head with a more fancy duppata. This is usually the norm when a bride enters the marriage hall before the nikkah or the mehndi. Unlike the other mayun brides, Aisha Khan did not wear any jewelry and accessorized her look only with a very basic flower teeka. Aisha Khan looked stunning in this entire look. 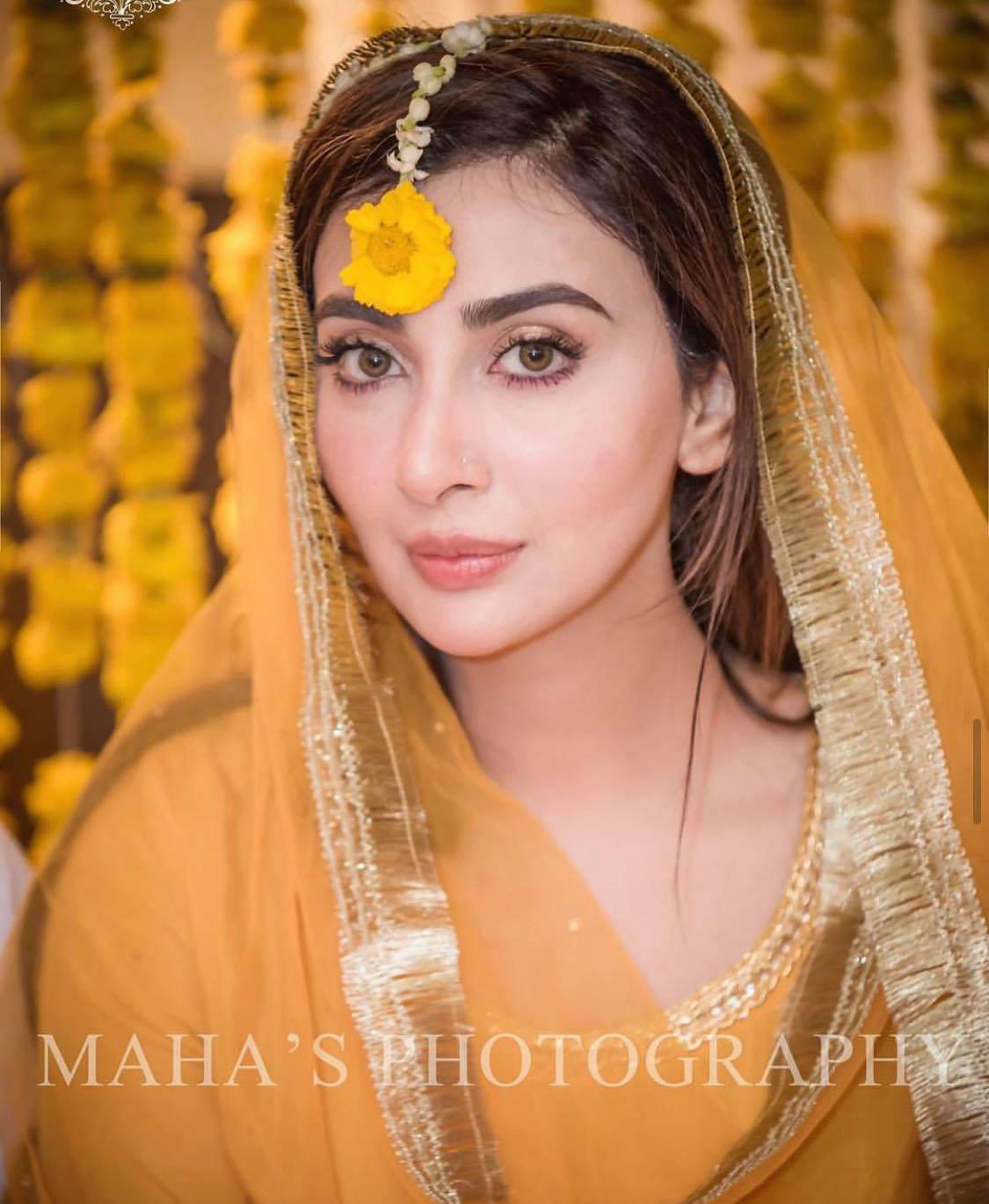 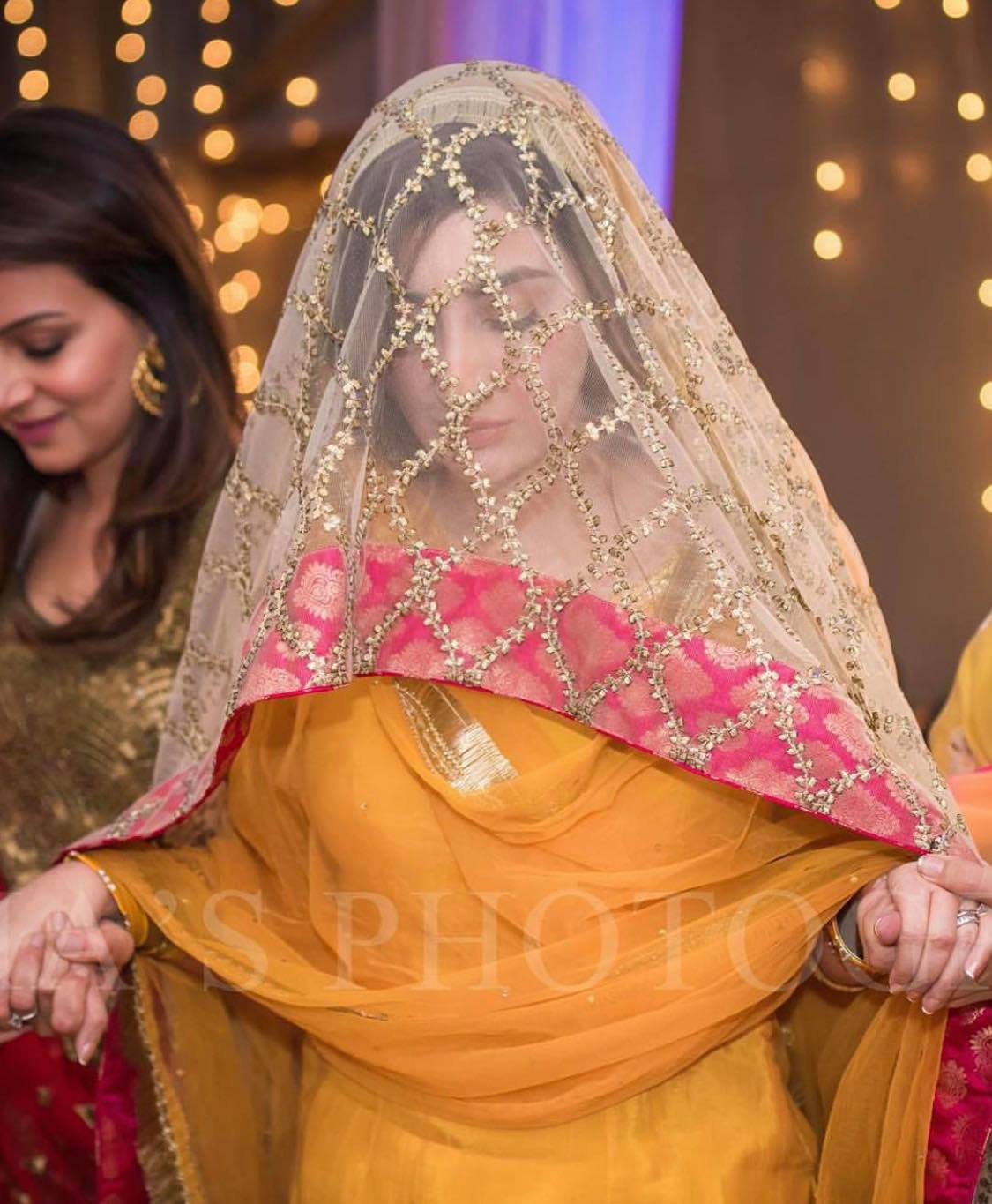 Iqra Aziz is really comfortable in her own skin therefore it did not come as a surprise that she did not wear a lot of make-up on her mayun. She was also the only mayun bride who had ubtan on her face. Iqra Aziz wore a traditional shalwar kameez with gotta work on the occasion. She wore earrings to compliment her look but otherwise relied on garlands to give her entire look the traditional touch. Iqra did not wear bangles and did not accessorize her look elaborately like other brides in the list. Her smile was the best accessory she wore on the day. 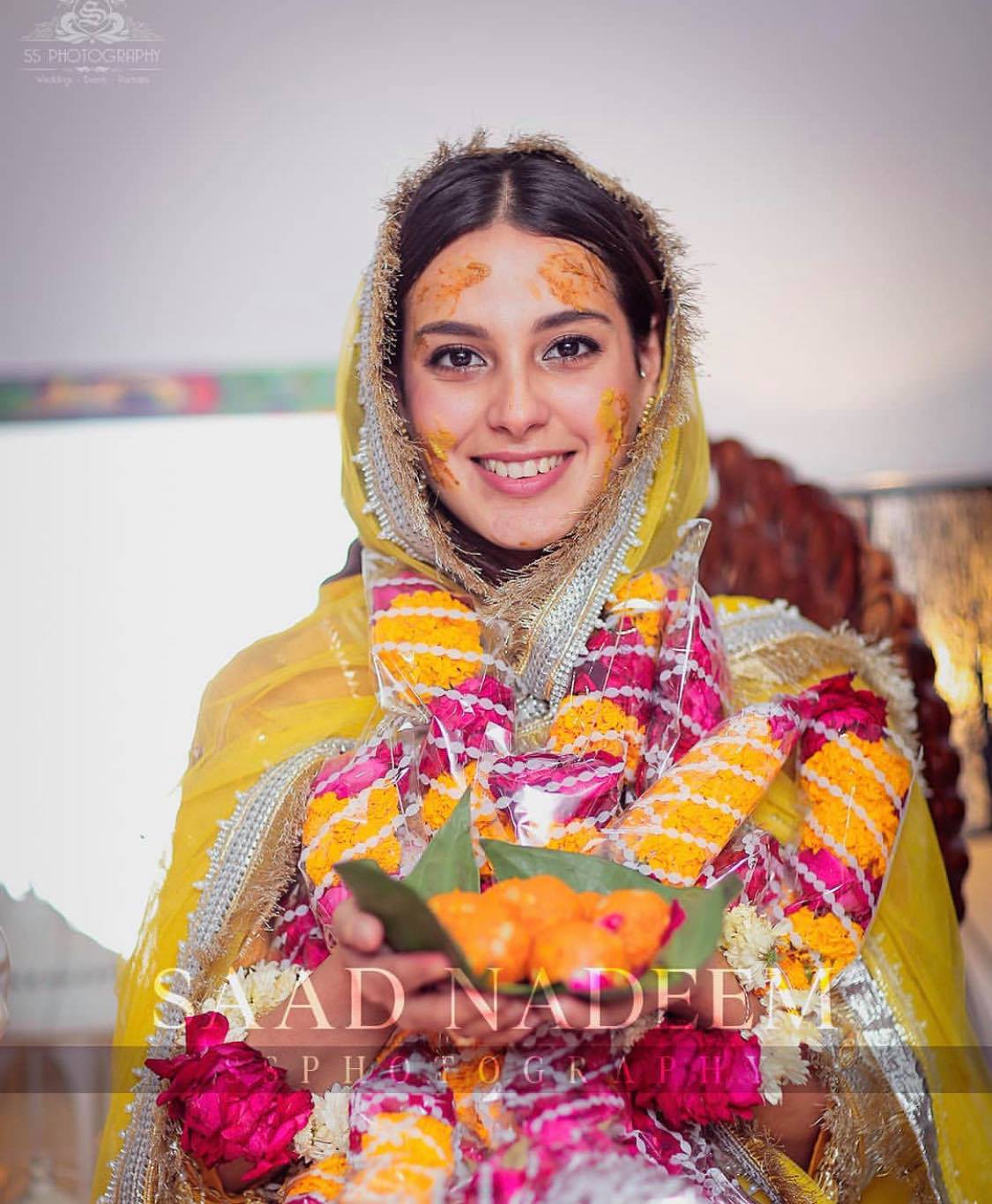 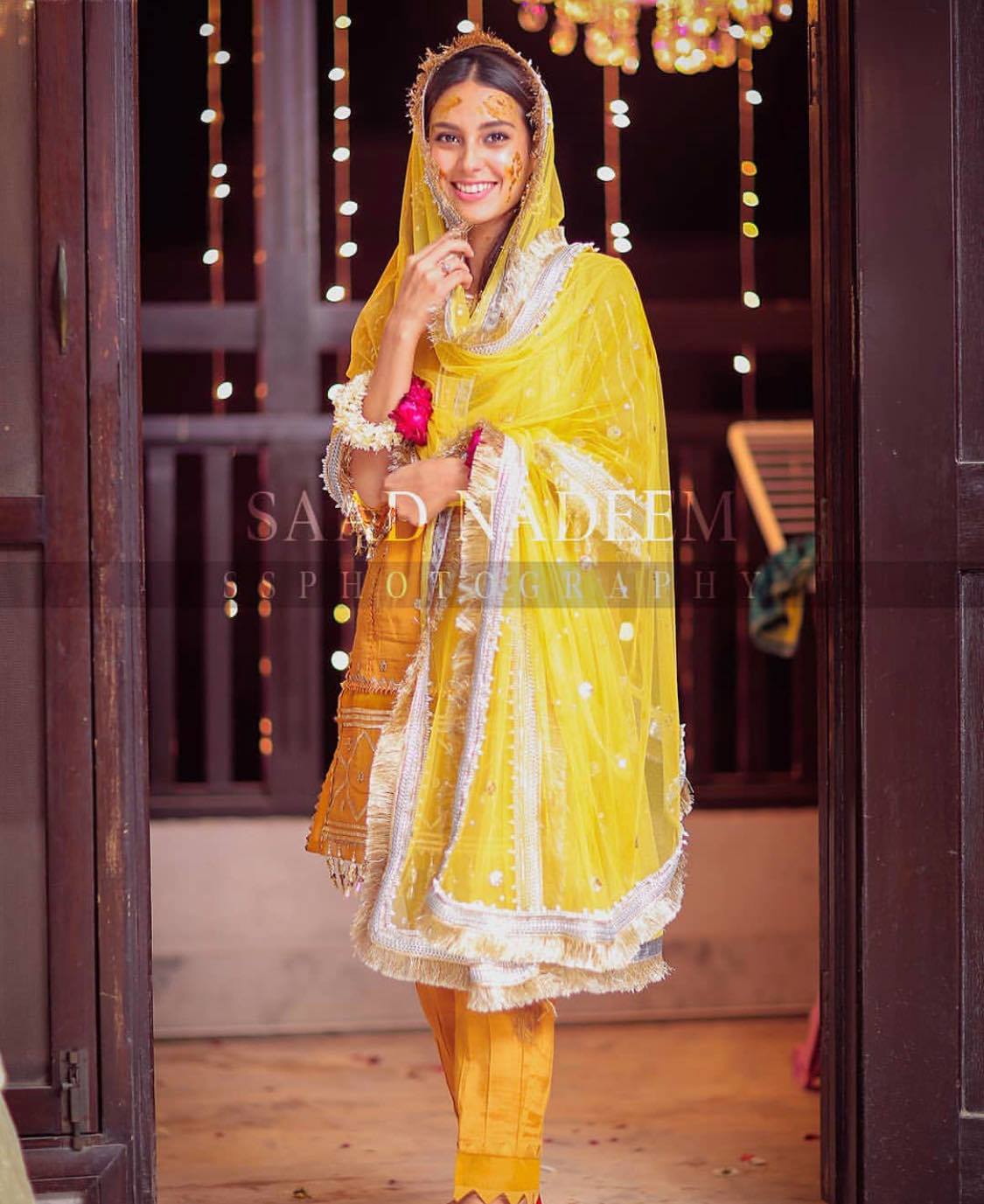 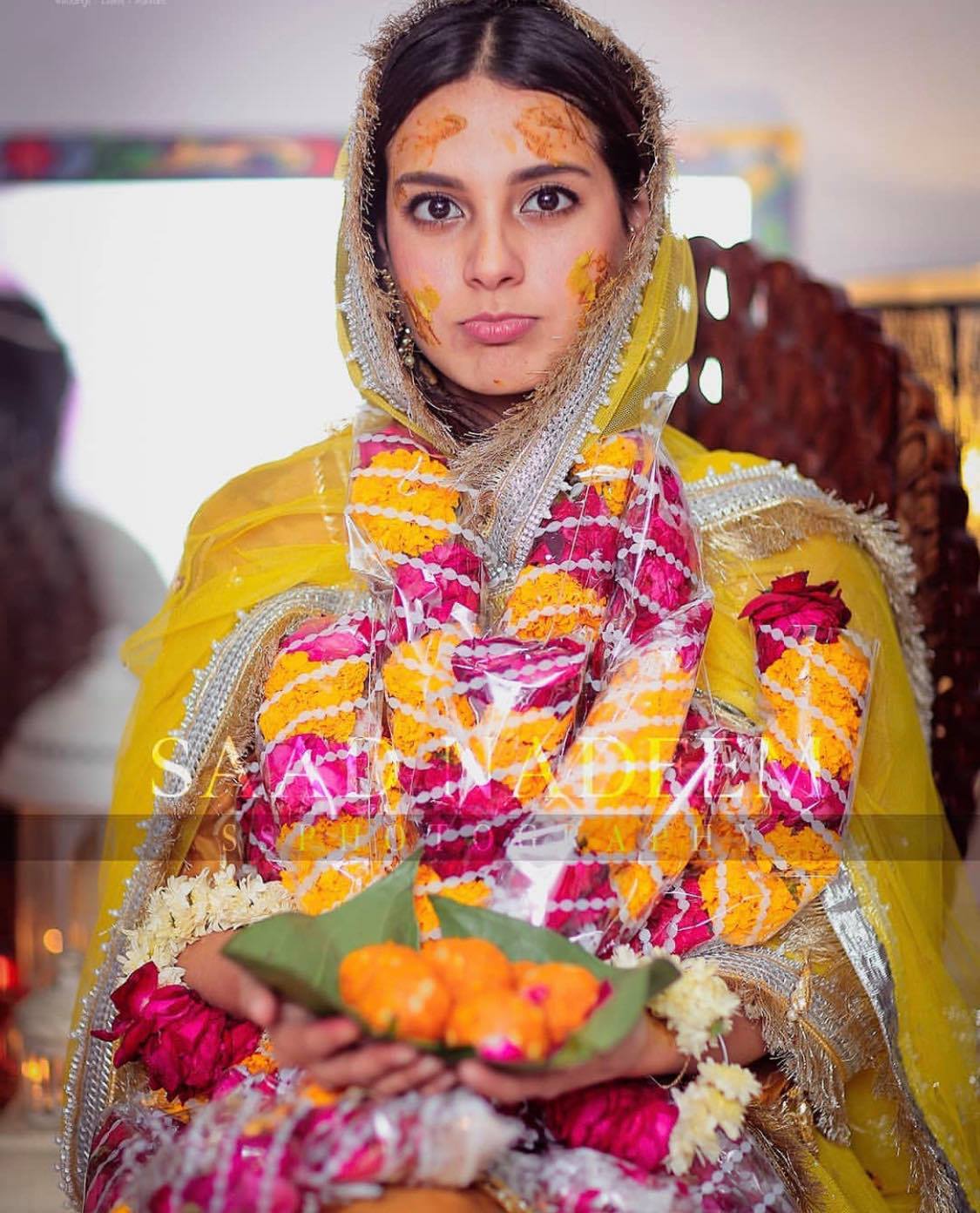 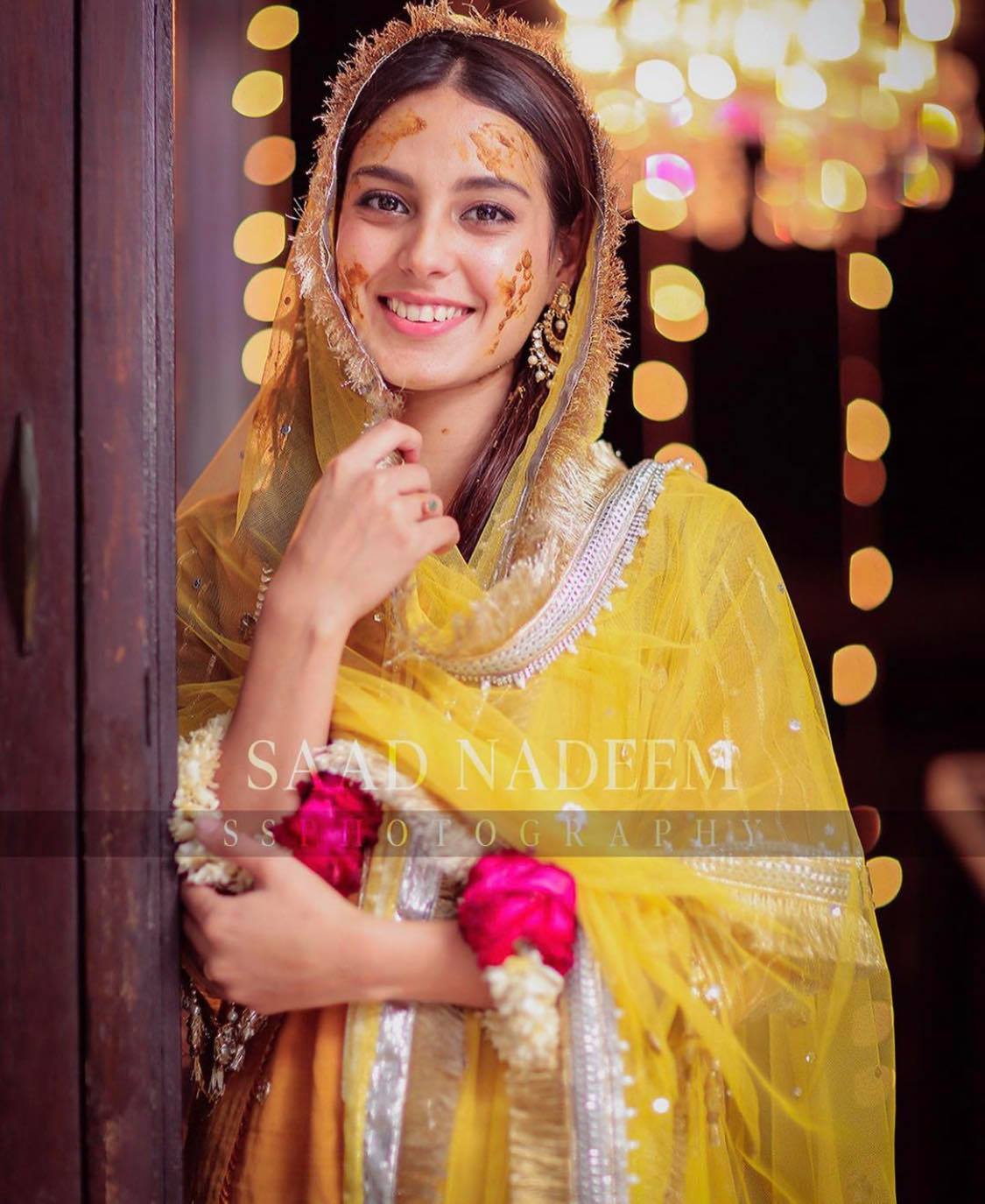 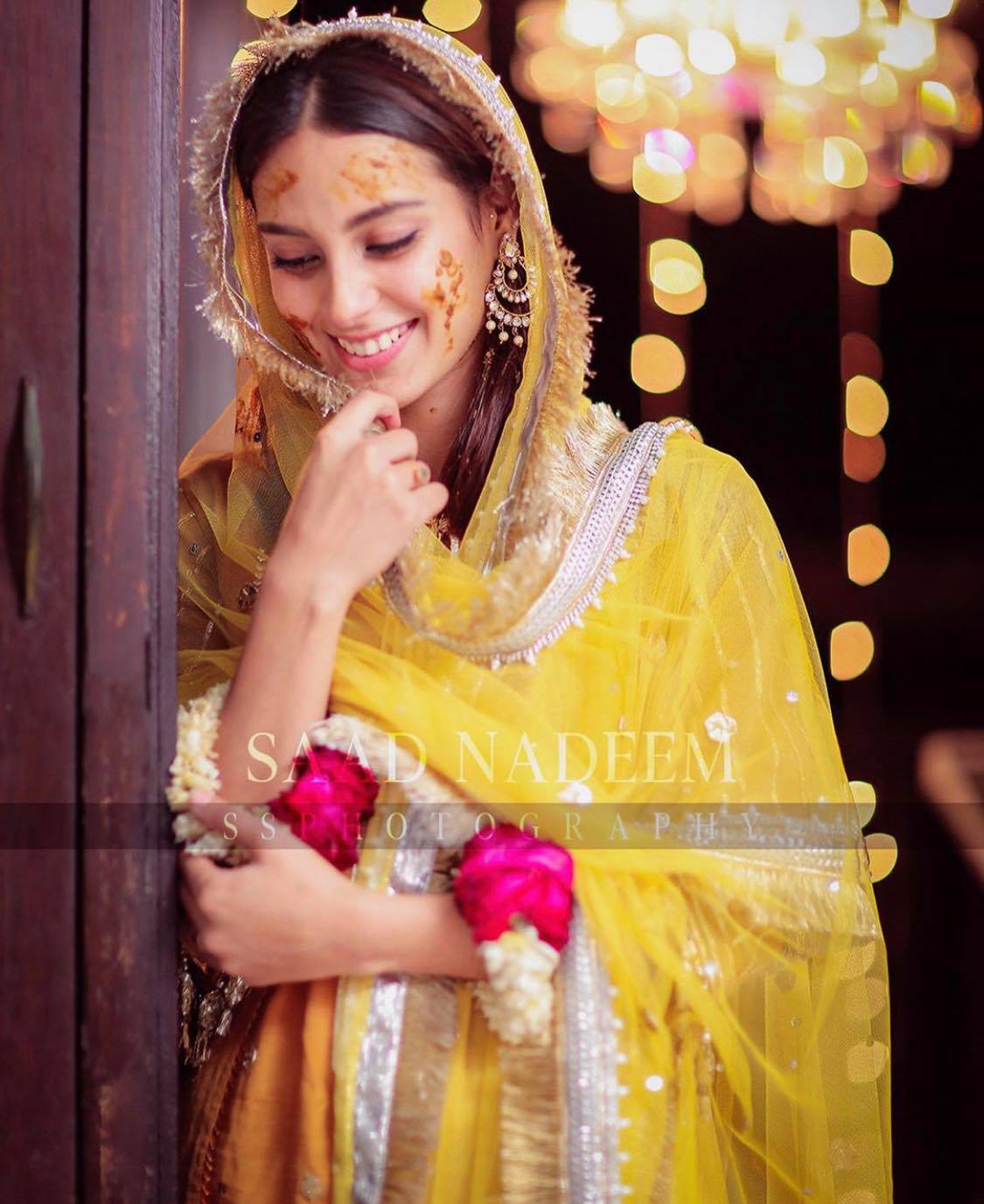 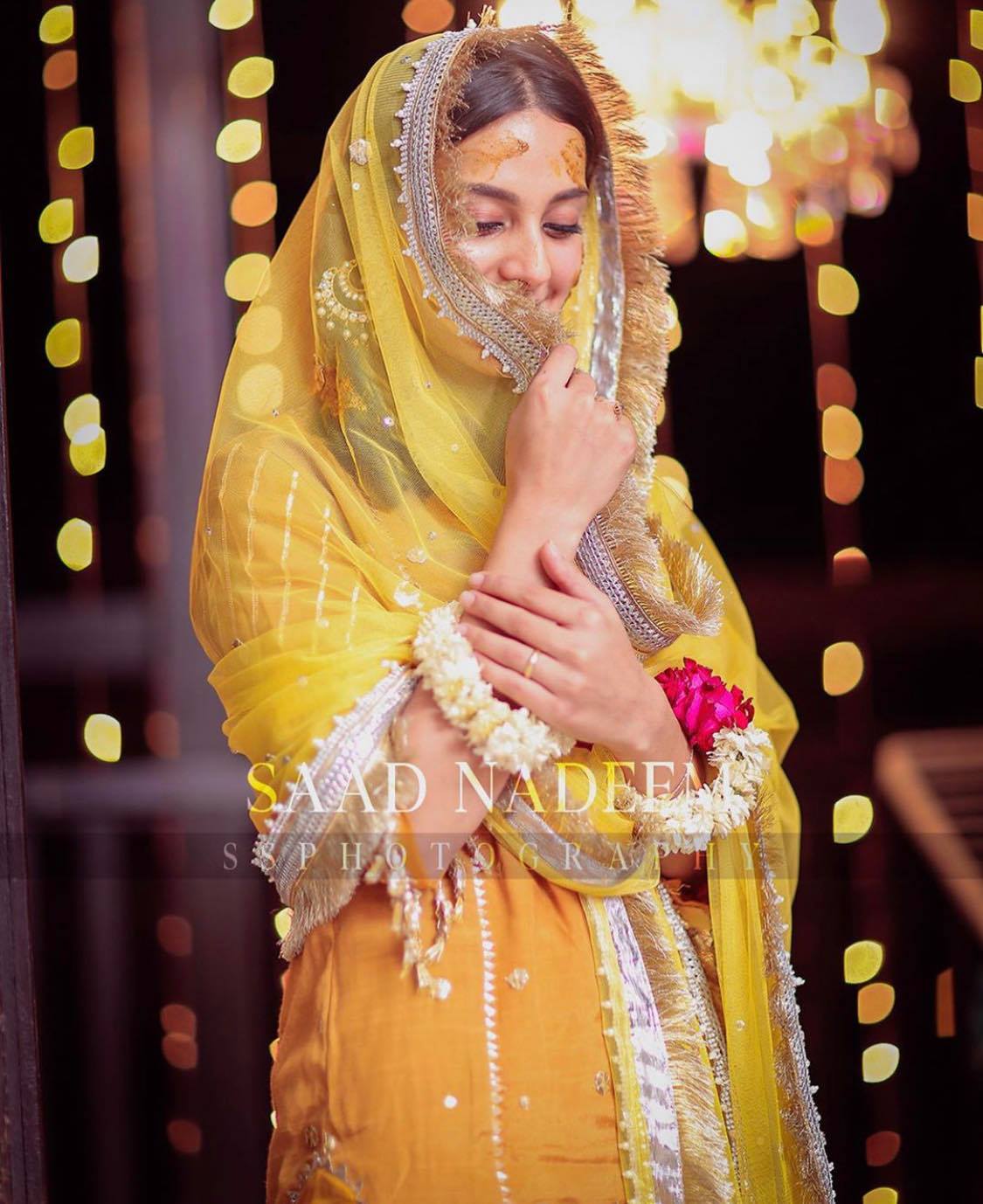 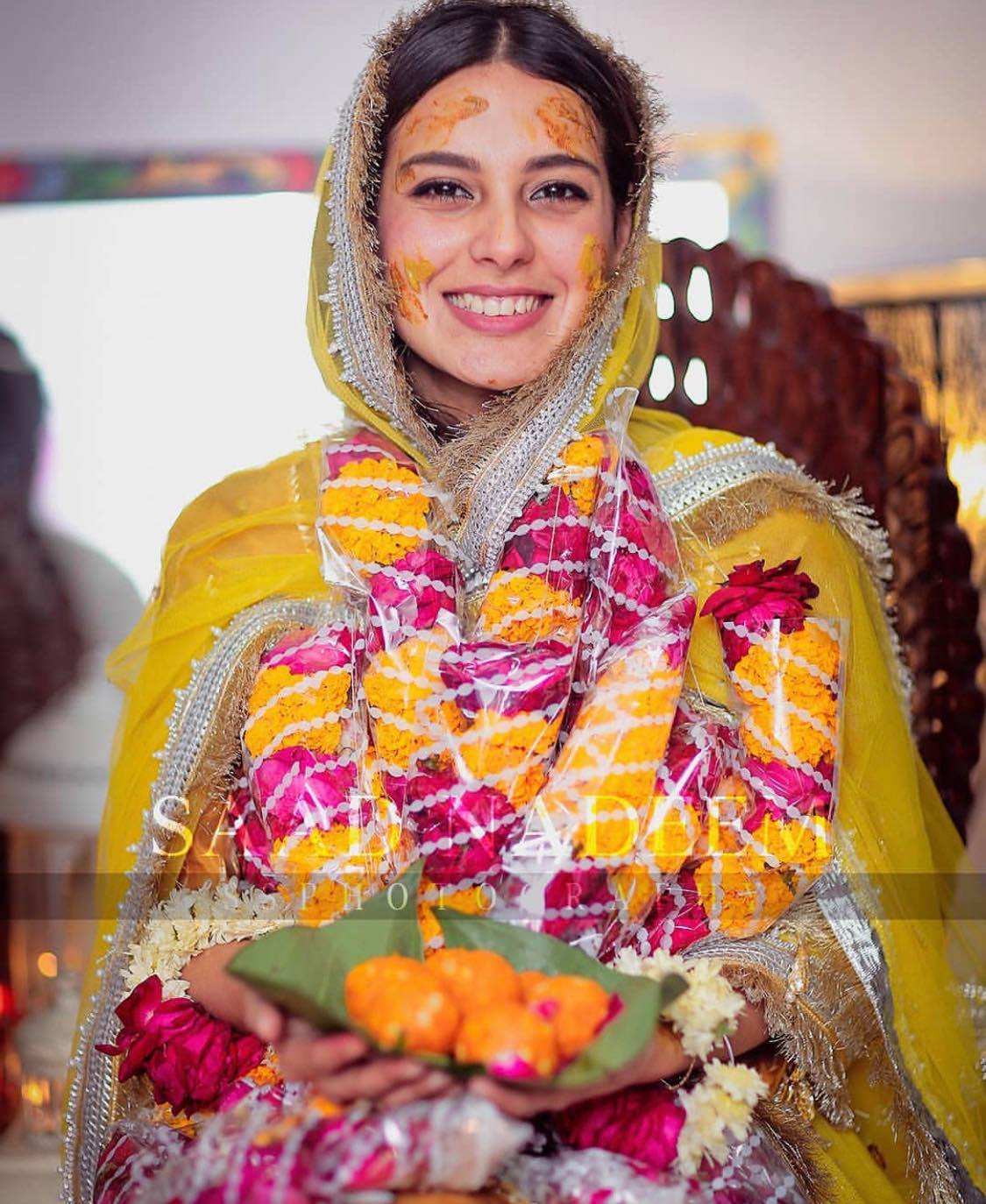 Ayeza Khan’s mayun look was colorful and vibrant. Although she wore a traditional and simple mayun dress with chunri print but the colors she chose made her look different from the other celebrities. The combination of pink and bright yellow isn’t one which girls are seen wearing on their mayun. Also, Ayeza Khan‘s rosy red cheeks and a traditional gold teeka made this entire look even more pleasing. Ayeza Khan also wore colorful bangles and her gold khussa went perfectly well with her overall look. Ayeza looked exceptionally pretty on her special day. 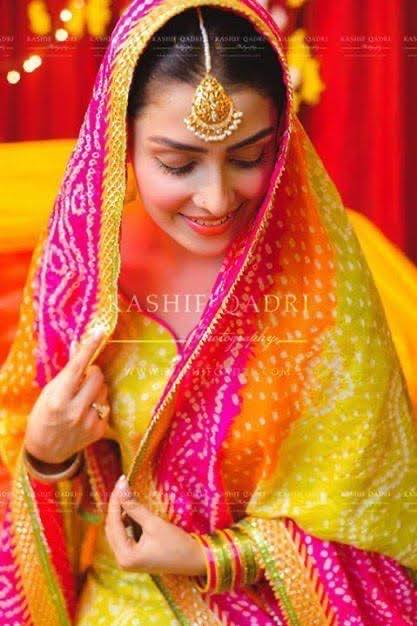 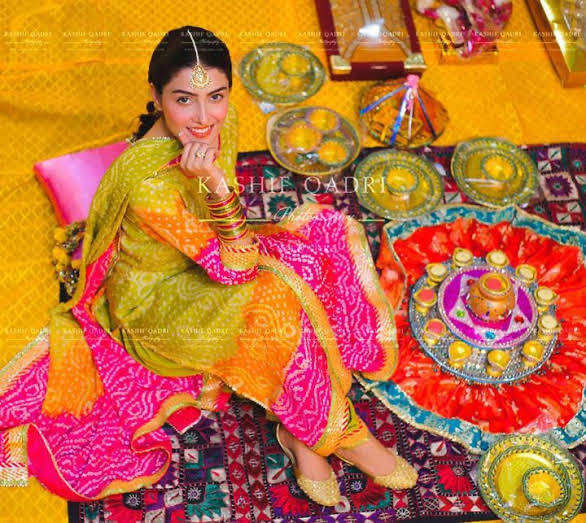 Should girls go for a more formal look on their mayun or just stick with the simple and basic look? There was a time when there was no concept of wearing make-up on the mayun functions but the pictures of these celebrities clearly show that trends have changed. All of them got professional make-up done even if it was minimal. There are so many beautiful shades of yellow and all these celebrities chose a different shade. Which look do you like the best? 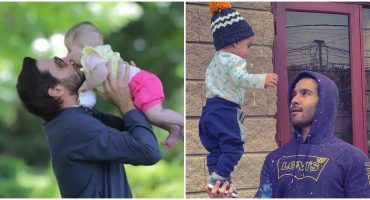 Best Moments of Celebrity Fathers With Their Children