The story of Bin Roye is all over the place; this was another episode which had quite a few developments to its credit yet this entire episode did not have a single emotional moment or meaningful conversation in it. The only pleasant surprise in tonight’s episode was that Adnan Malik has a bigger role to play in the story but then he is just another bland character in a drama which is over-crowded with characters I fail to relate to or feel for. There are characters which grow on your with every passing episode and then there are characters you get even more disconnected from as you watch a new episode every week, unfortunately the characters in Bin Roye fall in that category. There was a time when I had a reason to look forward to the next episode, dying to find out how Saba’s story in particular will unfold but now all these characters are losing their charm because there has been absolutely no character development, the characters that are already there are too plain, the new characters which have been introduced aren’t appealing either and this story has absolutely no twists which will keep you at the edge of your seat.

Once again I could not help but wonder if Saba was adopted since everyone is so concerned for Saman and even the dadi who knows everything and was supposedly so close to Saba pushed her to go live with Irtiza and Saman. Didn’t Saba tell her that she did not want to be around them? Didn’t she make it very clear that she wanted Saman dead? And most importantly doesn’t dadi know she is madly and deeply in love with Irtiza? I don’t understand the relationships between these characters at all. In one episode they are so close to one another and in the next episode it is almost as if they don’t know each other! Also, once again the developments in the story were so rushed, one minute Saman was talking to Saba and in the other scene her father had a ticket in his hand! Last time I checked you needed a visa to go to the US. I let this blooper pass hoping that the directors were rushing us because they had something grand in store for us but once again the Bin Roye team failed to give anything substantial to its viewers. Saba went to the US, ignored Irtiza as usual, Irtiza never bothered having a heart-to-heart talk with someone he had spent every free minute of his life with, to ask what had happened to her and yes she cooked a lot!!! Saba is very sughar all of a sudden and her brownies and coffee are the talk of the town! The mention of Saba’s cooking was repetitive. 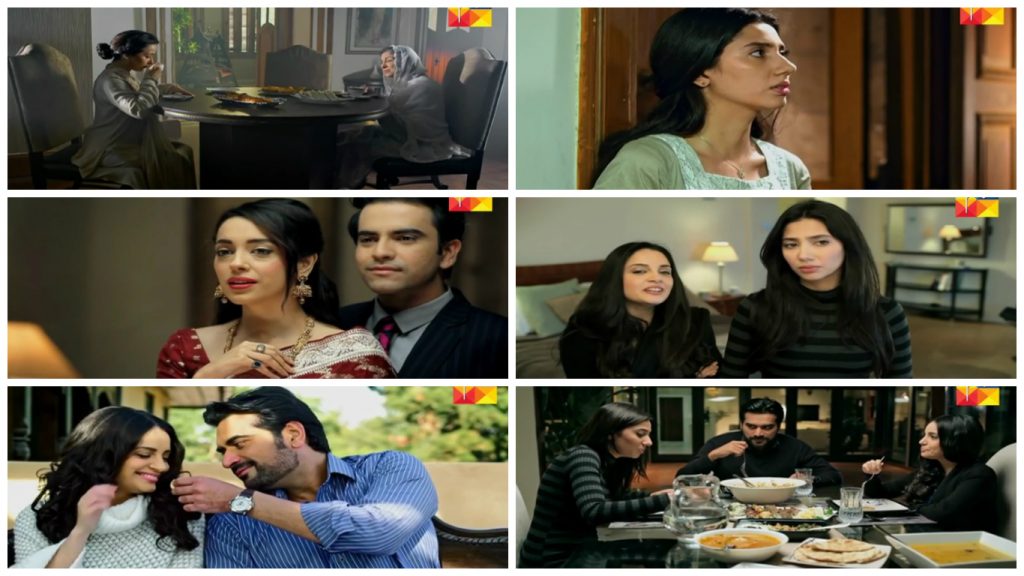 Amir’s conversation with his sister was another one of those plain conversations in this episode which were dragged and did not have much of a substance. Even though Mahira Khan’s performance in Bin Roye has been remarkable throughout but no matter how well she performs one actor whose character doesn’t have much to offer either cannot save a sinking ship! Yes! That is what Bin Roye is in my opinion. The expectations from this drama were huge but I find myself continuously comparing it to Dillagi, a drama which you could just watch because of its powerful dialogues and those deep and meaningful conversations. Pakistani viewers have tons of options nowadays and we have seen some great love stories on television in the recent past therefore I doubt that the viewers will be swayed away by star power and stunning locations alone.

Hamayun Saeed is a total miscast in this role and his talent is being wasted playing a character which has absolutely no depth. Same is true for Mahira Khan.  Someone mentioned that I do not discuss Safeer and Sonia in my reviews, well I don’t even want to talk about them, they are the most useless supporting characters who I want to forget all about as soon as the episode ends!

I am terribly disappointed with this recent episode because once again just like many other twists in the story, these new developments too fell completely flat. There is so much I wanted to see in this episode, so much that could have been shown but it wasn’t. There should have been at least one meaningful and powerful conversation between Irtiza and Saba. Also, the viewers were never shown how Saba feels right now about this whole situation. Yes, she is distant but showing that is just not enough! The writer and the director should have explored this character more so that the viewers could have a reason to stay interested in Saba’s story. Saman’s character is already quite robotic therefore I had absolutely no expectations from her whatsoever. What this drama lacks are emotions, you hear the characters say things about each other but do you feel them?? Well, I most certainly don’t! Also, with the exception of Mahira Khan, everyone’s make-up was so cakey tonight including Adnan Malik who usually does not wear a lot of make-up.

Oonchi dukaan, pheka pakwan is how I would sum up Bin Roye! How many of you watched this episode? Do share your thoughts about it.