Celebrities Condemn The Blast On Serena Chowk In Quetta

An explosion in the parking lot of a private hotel on Zarghoon Road Serena Chowk in Quetta the capital of Balochistan province killed four people and several injured. According to police, a loud explosion took place in the parking lot of a local hotel on Zarghoon Road in Quetta, which was heard far away. The blast set fire to several vehicles parked in the hotel parking lot, killing four people and injuring 11.

Federal Minister Fawad Chaudhary has also posted a tweet informing that the initial investigations are in progress and he is in direct contact with the Federal Ministry of Interior, Government of Balochistan.

Pakistani celebrities working in different fields have also shared their grief and condemned the Quetta blast at the time when high-level Chinese diplomates were in the city.

Let’s Have a look at the tweets and posts shared by the celebrities.

I condemn #QuettaBlast it’s really very sad. My heartfelt condolences and sympathies are with the victims & their families.May Allah protect us all Ameen.Stay safe everyone.

While TTP has claimed responsibility for #QuettaBlast , Interior Minister blames India to be behind. Basic Q : Why are then we keen to establish cordial relations with India 🇮🇳, requesting other nations for mediation and holding secret talks! What for!?

Stay strong Quetta, stay strong Balochistan, stay strong Pakistan..they have tested our resolve with terrorism for a decade.These cowardly attacks are to stop us from achieving our economic goals, our progress & prosperity but we won’t stop. Prayers for everyone’s safety. #Quetta

Pakistan’s enemy at play again in #Quetta. My condolences & prayers are with the victims & their families.

All Quetta Red Crescent volunteers plz wear your jackets and rush to the blast site and nearest hospitals to support patients, arrange blood and extend all possible help.#Quetta

– Our country has suffered far too long at the hands of deluded individuals who represent nothing but inhumanity. My family and I send our condolences, respect and amity to the victims and their loved ones of this unspeakable attack in #Quetta #Pakistan

I strongly condemn terrorist attack in #Quetta. Terrorists have once again demonstrated that they does not have the decency to respect the sanctity of even the holy month of Ramzan. I express my condolences to the bereaved families. 1/2

Every incident such as the blast in Quetta is an incident too many. But let us use these cowardly acts to strengthen our resolve, diminish our differences, and emerge stronger. We have come a long way, and Insha'Allah, we will go further. Thoughts & prayers.#Quetta, stay strong. 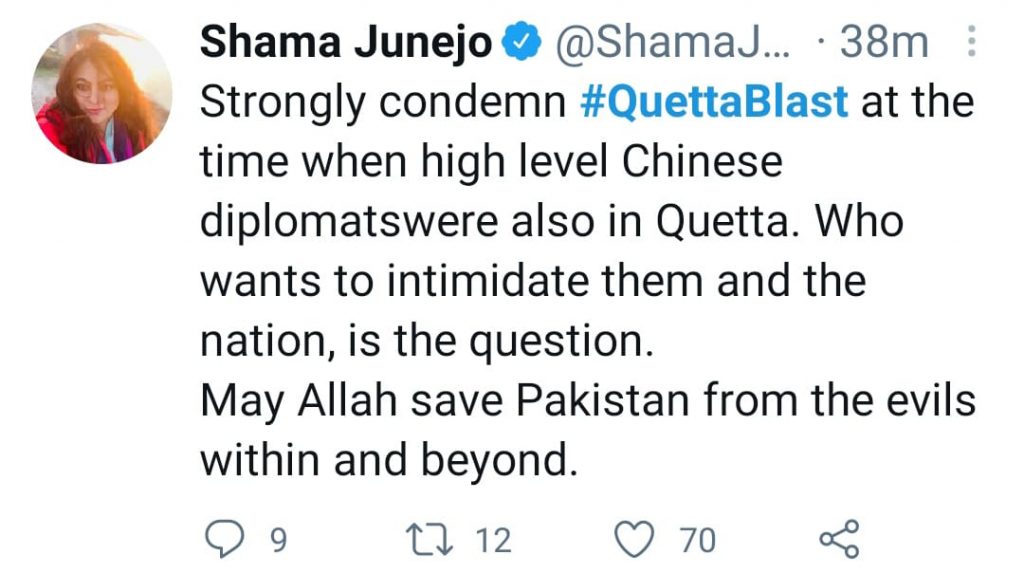