Ohkay so, this was yet another average episode of Dil Mom Ka Diya. I feel situations are becoming monotonous in this drama now because so far they have established the plot pretty clearly & have shown the family dynamics pretty well too. It won’t be wrong to say that things are becoming repetitive in Dil Mom Ka Diya & it’s a high time the story should move forward, other than being stuck at a point where Ulfat has a problem with everyone & get away with everything too.

Afzal & Ulfat are poles apart, this is such a fact that Afzal isn’t oblivious of but still he expects some sensitivity from Ulfat in the matters concerning him which he doesn’t really get from her. Ulfat is someone who has her sights on everything else except Afzal because over the years she has assessed it pretty well that her husband loves her a lot & he will never leave her, therefore she takes him for granted. Ulfat will make an issue about everything on a daily basis but when it comes to her husband, she will not even pay heed to what he is feeling or going through because in this relationship, she feels entitled as well as makes it a point every single time that she is doing Afzal a favor by staying married to him. Ulfat is someone who has zero tolerance for others & their opinions – just because Afzal lets her be, she focuses more on those who comment on her & do not really like her ways. Ulfat is only digging a pit for herself because it is too obvious that Afzal might not run out of patience but he will lose respect that he has for her. Afzal has treated Ulfat gently for too long & he might not be able to continue considering how Ulfat keeps on pushing all the wrong buttons. 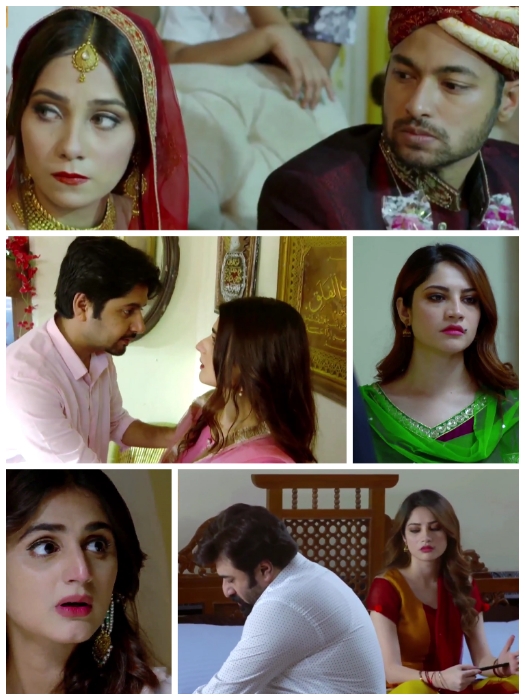 Ulfat does not like competition, but then there she is, always competing with others. Ulfat made a clear point that she will not participate in Kausar’s wedding but the moment she heard Tamkinat’s name, she immediately showed up. Ulfat is definitely someone who is aimless & has no purpose in life, that is why she relies so much on these cheap thrills to extract some fun out of it for herself. It is like she enjoys pinching people & hurting them – that’s her daily dose of adventure. All the things that she said to Kausar were mean & I liked how everyone came together to make Kausar forget everything that she had heard from Ulfat. The relationship that all these siblings share is the highlight of this drama. It is sweet & seems very genuine. It is nice that in this family where everyone has to deal with Ulfat, they all always take a stand for each other to show her that she can not walk over them like that.

As much as Ulfat is annoying, Salma is no less either. I find it funny that even though Salma is quite mature still after so many years have passed, she has not learnt how to deal with Ulfat. Salma has made it obvious that she does not like Ulfat & vice versa so she should just let her be. Salma always has to drag Ulfat in her conversation, giving Ulfat a chance to react & when she does, Salma further makes a point that Ulfat is not a nice person.

The entire Ulfat falling down on the floor & going into the labor was too exaggerated & it seemed more odd because Ulfat didn’t even have a bump to begin with. I think only suggesting something in theory is not the right approach, they should have tried to make Ulfat’s pregnancy look real at least. Also, I wish Ulfat had worn those lawn suits that she purchased in the beginning of the episode because the usual dresses that she wears are quite hideous. I think the producers really didn’t want to spend too much on the dress designing & stuff because the clothes that all of the actresses are wearing, excluding Erum Akhtar, look quite cheap.