The story continues to move forward at a steady pace but the recent developments in Mehru’s track particularly have been disappointing. Her realistic and practical side was the balancing factor, for now that side has definitely taken a backseat. Even though it is understandable why a woman like her who lived with a dominating man for all these years finds it difficult to be independent, most of us thought that this journey was more about Mehru building her own life therefore recent shift has been unexpected. I am more interested in Mahir’s track after watching the last scene of this episode. There was a definite change in Mahir’s personality tonight, he is all set to take charge. Even though Mahir revealed his true intentions in the past few episodes, I am more interested in watching Zamin fail! Some of the scenes covering the side tracks were not too entertaining but overall I am enjoying watching this show even though the recent shift in Mehru’s character is not likable and unexpected.

Mahir returned home tonight with a definite plan in mind and this time around he had Mehru’s unconditional support. Mehru also mentioned that she had also made a decision about Affan’s future but it was not disclosed in this episode. Later on, when Affan told her that he wanted to join the office, she did not have an issue with it. I am waiting to find out if there will be a surprise in store for Affan once he goes to the office. The preview of the next episode did show that Mahir told him he was incharge when he got there but the previews have been misleading. Mehru was more sure than ever about Mahir’s role in her life and unlike before her children were no longer a priority. Particularly, Mehru’s complete lack of interest in getting in touch with her daughter and her blind faith as well as dependence on Mahir has to be the worst change in her character. Even though she always had a gullible side to her personality, she did put her children first and her decisions never impacted her relationship with them. As a mother, she should have tried harder to reach out to her daughter, who had always been there for her.

Right from the beginning, Mehru was the star of the show even with all her flaws but suddenly her character has taken a backseat. Even though she was finding it hard to balance all these relationships even before too, she was making informed decisions and was not being fooled to this extent. Now, for the past two weeks, continuously her dialogues are more or less the same and are focused entirely on telling the viewers that she trusts Mahir more than anyone else in her life right now. Mehru no longer has a life other than Mahir at this point. I hope things change in the upcoming episodes. 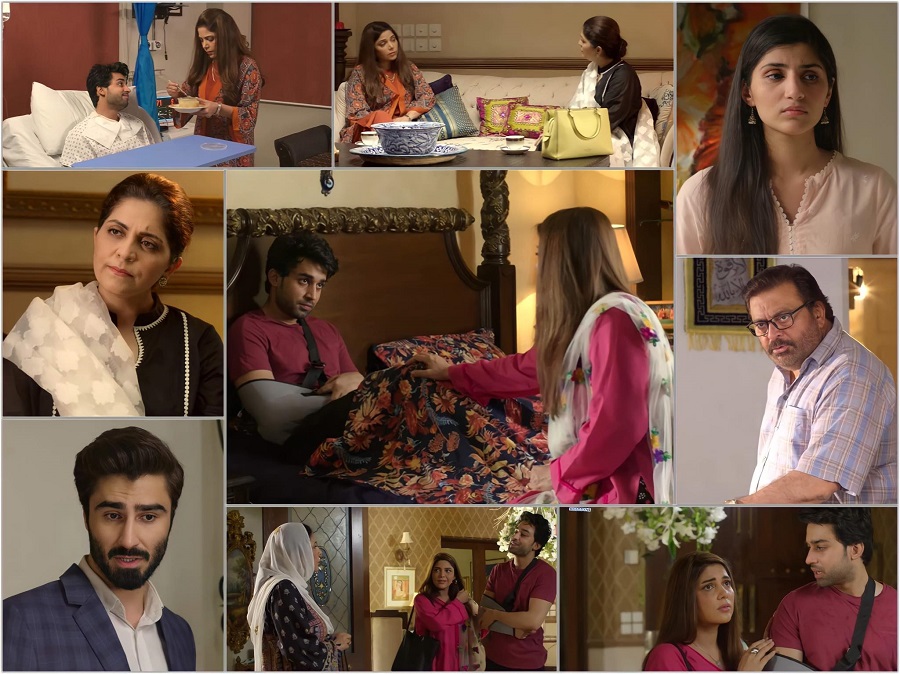 Phupo’s scenes continued to be more or less the same and thanks to the OST I know exactly what she has planned! The preview of the upcoming episode also revealed their plan and also that it failed. Mahir’s father and stepmother also got a great deal of screen time; I am waiting to see where this particular development is headed since it is being given so much attention. Affan finally came back to the house in this episode and was more willing to be flexible in order to make things work. He knows he no longer exercises the kind of influence on his mother that he did earlier. While he cannot stand to be around Mahir otherwise, he is willing to be in the same office as him. Affan has always been shown as an emotional and immature young man therefore it is highly likely that he will be playing second fiddle to his wife and phupo in the future as well. The women have managed to control him so far and they will continue doing so.

The most unconvincing element of this episode was Mahir’s speedy recovery. He literally walked out of the hospital and into the office! It would have been more believable if he at least had the sling on for a few days. Zamin was shown struggling with finances now that he was not in charge of Mehru’s business anymore. This was the most interesting part of the episode for me since I am eagerly looking forward to his downfall. Mahir is an intelligent young man who knows exactly what Zamin has been up to and now he will do whatever it takes to sign all those contracts and form a closer partnership with businessmen Zamin severed ties with so that he could profit himself. Mehru is as oblivious of what is happening in the company right now as she was before. She had complete faith in Zamin earlier and now she trusts Mahir blindly! She believes that Mahir is a trustworthy man who deserves to take charge.

Each episode of Dobara makes me look forward to the next one even when I find some of the shifts in the story unconvincing or not too impressive. The story still has so much potential and it continues to entertain. Bilal Abbas Khan was the star of the show tonight. He did exceptionally well translating Mahir’s newfound confidence on screen!
Did you watch tonight’s episode of Dobara? Do share your thoughts about it.