Ohkay so, writing of Sarwat Nazeer, director of Amin Iqbal & production of Six Sigma Plus; Dushman e Jaan is a soap opera which started airing on ARY digital on May 28, 2020. Dushman e Jaan’s story is in the initial stages, therefore every episode has a lot to offer because the plot & characters are being established. It is the kind of drama which has taken the viewers by surprise because of the unexpected twists & turns that came along. The drama which seemingly started on a simple note has now turned into a murder mystery & now with the case being filed & opened, it is promising to be more intense & engaging.

Hatim (Mohib Mirza) comes from an affluent but dysfunctional family. He is the only son of his parents Mr. & Mrs. Kamal (Imran Peerzada & Saba Hameed) but unfortunately, he grew up seeing them being an unhappy couple who had different ambitions & wanted completely different things from life. In this regard, Hatim found himself to be lonely & because his parents never had the luxury of time to spare for their only son. He has learned all those things which he is now trying hard to unlearn. Over the years, Hatim who seemingly carried a facade of being a sorted, strong & level-headed individual basically has harbored a lot of fears, complexes & shortcomings which have now become a part of his personality. Hatim’s character is layered & complex. He is quick to judge & feels entitled to form an opinion about others, especially women without even knowing them. 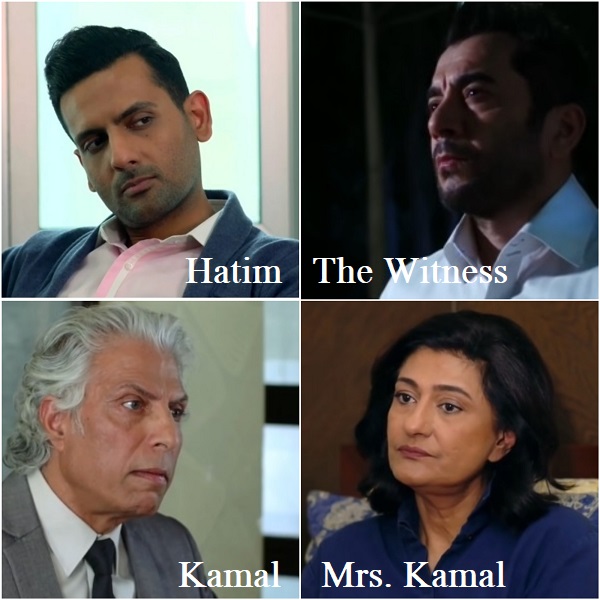 Ramsha (Tooba Siddique) the eldest daughter of the family takes the responsibility of keeping her family afloat. With her father Ehsan (Irfan Khoosat) becoming disabled & youngest brother Rameez suffering from kidney failure, Ramsha decides to bear the financial burden of her entire family. Ramsha also has a younger sister Rubab (Madiha Imam) who provides her relief & takes care of smallest things related to her because she acknowledges the hard work her eldest sister Ramsha does for all of them. Ramsha has grown to be thick-skinned, the circumstances shaped her character in such a way that she had to become self-sufficient, self-reliant & practical. Her entire family feels a lot for her because they know she is doing more than she should for each one of them. This humble family is all about love, respect & being considerate towards one another, which is heart-warming. 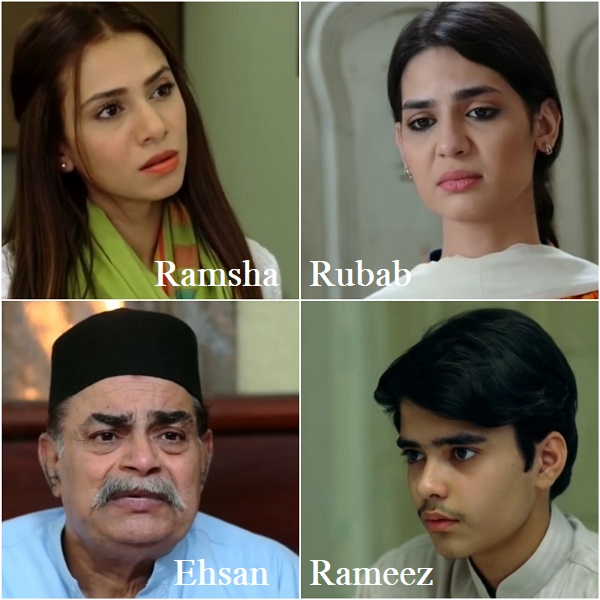 Ramsha happens to be engaged to her maternal cousin Zaheer (Mubarak Ali) but seeing the responsibilities she has towards her family, she decides to call the engagement off. A brief moment that she has with herself shows that she actually wanted to get married but because she put her family & their needs ahead of her, she had to take this decision keeping practicality in mind. At this stage of her life, she could not afford to walk away, leaving her family in the lurch, fending for themselves. Zaheer’s parents Abid (Mohsin Gillani) & Nighat get him engaged to Rubab. Zaheer wanted to get settled but Rubab is definitely not someone he wants to spend the rest of his life with, this is why he gets married to his colleague Rukhsana (Farah Tufail) & puts his parents in an awkward position! 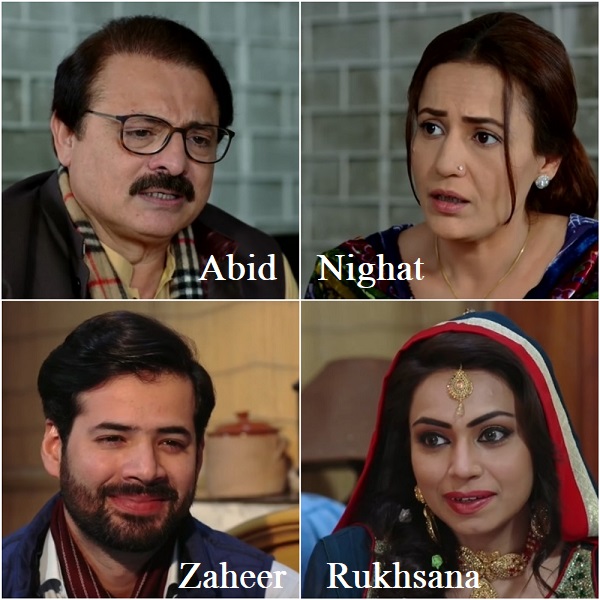 The most interesting aspect of the drama definitely was Ramsha’s character & the way it was etched out by Sarwat Nazeer. Ramsha was selfless when it came to her family but she also knew how to walk on eggshells because the world outside the vicinity of her humble abode was very harsh & cruel. Ramsha always stayed dignified & chose to live life on her own terms. This is one attribute of hers which set her apart from the rest & probably also made her a recipient of undue judgments from the likes of Hatim!

Hatim happened to be a co-owner of the firm Ramsha worked at, therefore he & Ramsha got to interact a lot after her immediate boss went on a business trip. Hatim being a typical spoiled brat uses Ramsha to get out of a sticky marriage proposal situation that his parents had set for him & that’s when Mrs. Kamal sees something different in Ramsha feeling she might be the right person for Hatim. The way writer Sarwat Nazeer showed that despite being in a very dire situation, Ramsha chooses to side with the truth & does not take advantage of the deal that Mrs. Kamal proposes to her to bring her son Hatim closer to her, was a masterstroke. It is a rarity to find characters like Ramsha in Pakistani dramas & this is the reason, she was a breath of fresh air. The conversation that Mrs. Kamal & Ramsha had with each other, opening up about their fears, troubles & insecurities was one of the best conversations of this drama so far. It showed how two strong women were consoling each other & not only that, they understood their fair share of struggles.

Hatim & Ramsha both do not really have a good opinion regarding one another initially but after their regular interactions, they both start seeing each other in a very different light. Ramsha softens up to Hatim & Hatim learns that he was quick to judge her & she is more than what he perceived her to be. Unfortunately, Hatim misconstrues Ramsha’s niceness & assumes the change in her behavior is because of the amount his mother paid to her. That’s when Hatim lets the emotions get the better of him & he drops her off in the middle of nowhere. Sadly, after becoming a victim of physical violation, she ends up getting killed.

Dushman e Jaan’s script has been written in a typical Sarwat Nazeer fashion; it is simple but has its intense & gripping moments. Most of the times the scripts that are very straight-forward & have a few characters with strong personalities are enough to click with the audience & grab their interest. Dushman e Jaan’s strongest points are the twists & the turns that no one saw coming that too in the initial episodes. From this stage onward, the story is going to become predictable with Hatim & Rubab coming across each other, but the plot has been established in such a manner that it is already going to keep the viewers hooked because there happens to be an eye-witness who will eventually unveil Hatim’s indirect involvement in Ramsha’s death.

Dushman e Jaan has offered a lot to viewers in the initial episodes, there are some sweet moments shared by siblings, some harsh ones shared by the unhappy couple. The depression of a man who is now left with nothing but regrets & he knows how his actions have led to a harmless girl losing her life. The more Hatim learns about Ramsha & her struggles for the sake of her family, the more he finds himself guilt-stricken. The writer has skillfully shown the impact the relationship of the parents & house dynamics leave on a child & how it then affects others & the society in general. Hatim on his own did not see any faults in him & he failed to acknowledge how he let the bitterness of his parents become a part of his personality that he mirrored it in his routine & daily interactions with others.

Hatim is now full of regrets & his mother is trying to do everything to bring him closer to her because even she realizes the time she has wasted & the damage her negligence towards her son has caused. Unfortunately, Ramsha won’t come back but now Hatim has to pay the price & do what it takes to redeem himself. Hatim is now going to get in touch with Ramsha’s family but will he be able to confess anytime soon, that is yet to be seen. I also feel Rubab’s character will emerge to be stronger, it is only now when she will be pushed to her limits, she will learn how much she can endure. She grew up seeing her sister Ramsha being so resilient, therefore it will be interesting to see Rubab evolving & turning into a stronger character.

The plot of Dushman e Jaan does remind me of Bollywood’s movie Tum Bin a lot, but there definitely are a lot of differences with the shift in the characters & their respective roles. Tooba Siddique was phenomenal as Ramsha, in fact it won’t be wrong to say that it was because of her character as well as her strong portrayal that I got interested in watching Dushman e Jaan. Mohib Mirza has done wonders as Hatim & he has outdid himself. I find it hard to remember any performance of Mohib Mirza in the past being this convincing & strong. The story is well written & the drama is well directed. The only fear is that stories like these should not drag & I hope the pace remains consistent – with Dushman e Jaan airing 4 times a week, that won’t be the issue unless they reduce the number of episodes per week. At this stage, Dushman e Jaan is definitely a drama that should be watched because of the quality content & beyond brilliant performances of all the main leads. The story is now going to be all about Hatim’s journey from regret to redemption, let’s see how it goes. Please share your thoughts about Dushman e Jaan.