Fawad Khan completely stole the show when he sang the song “Satrangi Re” at the grand finale of Pepsi Battle of The Bands. This was the title song of drama serial Satrangi which aired in 2008. Fawad Khan sang it originally too and he also acted in the play. The song is written and composed by Fawad himself which is why his fans were even more excited to hear him sing this song once again after so many years. This song proved to be nostalgic for so many of his fans who had been waiting for such a performance for a really long time. The fans were ecstatic to find out that Fawad Khan the singer and the musician was very much alive. This was one of the best songs sung by Fawad Khan but also one which did not get as much appreciation as it deserved. For this reason too people were very pleased that Fawad chose this play for the finale. 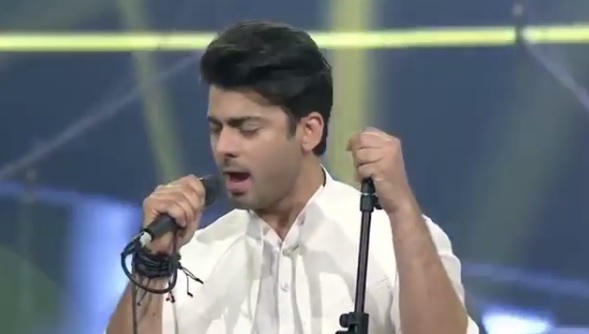 After this performance, his fans want to see him pursue music more than ever since they are convinced that Fawad has so much to offer so he should not restrict himself to acting and modeling only.

" Satrangi re " song performed by Fawad in Pepsi battle of bands. What a mesmerizing voice!!!! Love you so much Fawad 💗💗😘😘😘 You are looking like an angel in White Beautifully performed by all.. 👌👌👌👌👌👌 Posting full song for all my Fawadian Friends. Credit : @pepsipakistan Swipe left for full song You can watch it on you tube also. Link in bio . . . @fawadkhan81 @arbazkhan_official #fawadkhan #fawad #PepsiBattleOfTheBands #Satrangi

Can’t get enough of #FawadKhan can we? Watch him performing #SatrangiRe on www.youtube.com/pepsipakistan . The song is written and composed by Fawad himself and speaks of unity and togetherness. . . . #PepsiBattleOfTheBands #IMWithTheBands

A post shared by DIVA Magazine Pakistan (@divamagazinepakistan) on Sep 3, 2018 at 6:50am PDT