Few Reasons Why I Won’t Be Voting For PPP

Yes it is strictly everyone’s personal matter who we decide to vote for but we also have to bear in mind that our votes will collectively decide the fate of the entire nation. For this very reason it is very important that we make informed decisions and vote for the party who we think will be able to fulfill its promises and take our country out of this difficult situation. I am not going to mention here where my loyalties lie but one thing I know for sure is that I am not going to be voting in favor of the Pakistan People’s Party and I have some very solid reasons to support my case which I am going to share with you. Please feel free to share your thoughts. The reasons are as follows:

Pakistan People’s Party did nothing for the country or even the democratic process during its five years in tenure. Five years is a long enough time for a party to prove itself but PPP did nothing to make the life of the common man easy. Forget about the common man, even people who are affluent found it extremely difficult to cope with the energy crisis. Businesses suffered badly but despite of all this the PPP chairman still claims that PPP worked very hard to keep the economy stable in the most trying of times…a claim that makes me laugh!
Pakistan has parliamentary system, which means that the Prime Minister is the head of the government and is the main executive authority in the state but the changes that were made by Musharraf turned the Prime Minister into a puppet and the President exercised the executive powers. The PPP government did not amend the clause and the president continued enjoying the powers which are not rightfully his in a parliamentary system. The entire tenure of the PPP government was based on one man show. The five years of PP’s tenure were nothing short of torture in every sense of the word. There was insecurity, injustice and price hike beyond limits.

What is a party without a leader? Yes, this is a very strange but true fact that PPP lacks proper leadership. The party that was once known for its charismatic leadership seems to be lacking a proper leader who can communicate with the masses or represent the party properly. All those leaders who were very close to Benazir Bhutto were relegated to the background soon after her death and although Benazir’s son Bilawal “Bhutto” Zardari was made the chairman of the party but the fact is that he is only 20 years old, has absolutely no experience regarding politics and is merely being used as a pawn. What is worse is that it is common knowledge now that Bilawal and Zardari have been having disagreements and that is the exact reason why Bilawal did not even mention his own father when he addressed the nation and is not even going to be here in the country when the elections take place. Zardari has failed to rise as a true leader and others are probably not allowed to take a lead, which suggests that there are bifurcations within the party and for this very reason I don’t have high expectations from PPP. 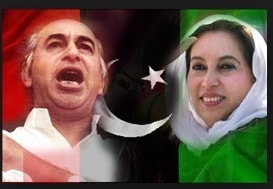 I don’t agree with the “Kabar ki siasat” theme of PPP’s election campaign. I am not going to talk ill of the dead; yes Zulfiqar Ali Bhutto’s charisma was unmatched and Benazir followed in her father’s footsteps and both of them were murdered in cold blood but ENOUGH ALREADY. For how long is PPP going to rely on the “shuhda” and keep on expecting people to give them sympathy vote. Why don’t they have any new leaders to show for? Zulfiqar Ali Bhutto and Benazir Bhutto will always be remembered in history as great political leaders but how can the PPP keep on asking people to vote for them when they are no longer alive and how can the voter say that they will vote for Bhutto when Bhutto is no longer alive. Can we please bury the dead and let them be at peace. The fact that PPP has to rely on kabar ki siasat goes to show that they have nothing else to their credit, which is very sad!

PPP’s slogan does not appeal to me at all because they did not do even half of what they promised in five years of their tenure. I agree, no political party has ever come up to the expectations of the people or has kept all the promises that it made during the elections, it is not humanely possible because there are external factors involved which may be out of anyone’s control but PPP has made a mockery out of its own slogan by going against everything they promised. Roti Kapra aur Makaan…anyone out there who got these three easily while PPP was in power? Maybe they should replace it with bijli, paani aur gas. Ilm, sehat, sab ko aam…this reminds me of all the doctors’ strikes and the government’s failure to resolve the issue. Dehshat se mahfooz awam…I cannot even count the bomb blasts that I have personally heard during the PPP tenure. The government’s inability to deal with the situation was nothing hidden. The mobile phones signals disappearing for days was the only solution the government could come up with. Ooncha ho jamhor ka naam…there is no democracy within the party itself so expecting them to promote democracy on the national level would be expecting too much.

I am sorry if I offended anyone with my arguments but consider this article more of venting out than anything else, you should feel free to do the same.