The film producer Hamid Salman will be making a film on Abdul Sattar Edhi in which Naseeruddin Shah will play Edhi’s Character. No doubt that Pakistan is facing a great loss after the death of the noble man “EDHI” and this initiative of making a film and paying attribute to the legend is worth appreciation.

Hamid Salman held a press conference at Lahore Press Club and announced that he will be making the film, ”I am Edhi”. By making the film Hamid Salman wants to thank and honour Edhi’s unlimited contribution towards humanity. Further Salman also shared that he plans to donate ten percent of the film’s revenue to Edhi Foundation.

As Naseeruddin Shah has given excellent performances previously in movies like Iqbal, Paar and Dirty Picture, it is expected he will do justice to Edhi’s role. This film will not be Shah’s first Pakistani film, he has previously done Khuda Kay Liye and Zinda Bhaag. 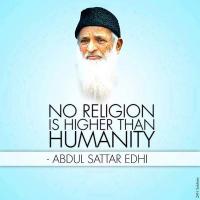