2018 has so far proved a mixed year for the Pakistani cinema with few hit and miss films. The last major Urdu film of 2018 was Motorcycle Girl released almost two months ago on 20th April 2018. No Urdu film was released in May 2018 due to the holy Islamic Month of Ramazan. The two month long dry season will be over on upcoming Eidul Fitr 2017 where a handsome number of films are releasing. Eidul Fitr is the major festive occasion in our country followed by Eidul Azha. It is the time of joy, family reunion, outing, recreation and vacation. The long holidays of Eidul Fitr benefit the entertainment industry as well majorly cinemas and theaters. To utilize these holidays the big banner films are scheduled to release on Eid. Eidul Fitr has historically been the most successful time for the Pakistani cinema in an year. However from past one decade, Eidul Azha has overtaken the Eidul Fitr with respect to the business of local films. The major films which were once specific to Eidul Fitr are now shifted to Eidul Azha. The most significant reason is the direct competition with the Bollywood Eid film. Every Eidul Fitr some Khan starer Bollywood film gallops the bulk of the cinema shows and business. On 2015’s Eidul Fitr, Bollywood’s Bajrangi Bhaijan (BB) emerged blockbuster. Due to the enormous success of BB, many shows of the two Urdu films Bin Roye and Wrong No. also released on Eidul Fitr were shifted to BB. Though eventually Wrong No. and Bin Roye also proved successful but their business was impacted by BB. On 2016’s Eidul Fitr, Bollywood’s Sultan made many new records of collections like most earning in a single day, most earning on a weekend. The film earned around 34 crore and became the highest earning Bollywood film in the Pakistan. Two Urdu films Swaal 700 Crore Dollar Ka (SSCDA) and Blind Love were also due to release on Eidul Fitr in 2016. But due to unavailability of shows Blind Love was not released and the only film SSCDA struggled against Bollywood’s Sultan. The situation changed in 2017 as the government has not allowed the release of Bollywood Eid film Tubelight and hence no Bollywood film was released on Eidul Fitr 2017. This year Eidul Fitr will fall on 15th or 16th June 2018 Here is the summary of the films coming on Eidul Fitr. Hollywood Hollywood films are only released in the multiplexes having 3D screens. Hollywood films have their own dedicated audience. This Eidul Fitr only one Hollywood film Jurrasic World – Fallen Kingdom is releasing. https://www.youtube.com/watch?v=vn9mMeWcgoM Bollywood: No release Like 2017, no Bollywood film is releasing on Eidul Fitr. In 2017, the government did not allow the release of Bollywoods’ Tubelight on the Eidul Fitr. There was no official statement on its release and it was expected to hit theaters after two weeks of Eid. However Tubelight‘s business was not as per expectations in India and the rest of world and consequently the film was not released in Pakistan even after Eidul Fitr. This year the Federal Government has defined the regulations of films releasing on Eid. As per the official notification released three weeks ago, no Bollywood film will be screened till after two weeks on both Eidul Fitr and Eidul Azha. However last week upon the pressure of Bollywood’s film distributors the government has reduced the ban to one week. The 2018 Bollywood’s Eid release is Race 3 which now will release in Pakistan on 22nd/23rd June 2018 one week after Eidul Fitr. Bollywood films have an all-seasons and all-weathered loyal audience in Pakistan across all sections of the society. Despite hostile aggression from India on borders Bollywood films earn huge in Pakistan from the posh areas multiplexes to crowded areas old single screen cinemas. The prime example of the bonding of the Bollywood fans in Pakistan is the business of 2016 Eidul Fitr’s release Sultan which earned a mammoth 34 crore in three weeks and became the highest earning Bollywood film in Pakistan to-date. Before its release filmi circles were predicting a possible low turn out for the film as Indian army butchered around 120 Kashmiris in the Indian held Kashmir within a week around Eidul Fitr while thousands of Kashmiris lost eye sight due to the use of the pallet guns by the Indian forces. Despite continued state terrorism and blood bath in Kashmir on Eidul Fitr 2016 by the Indian forces, Sultan received a massive response on Eidul Fitr in Pakistan. The film registered the largest ever opening weekend for any film by earning 7.5 crore in just four days again proving the massive appeal of Bollywood films in Pakistan. So even though Race3 will release one week after the Eidul Fitr, the film distributors are hopeful about its massive business. 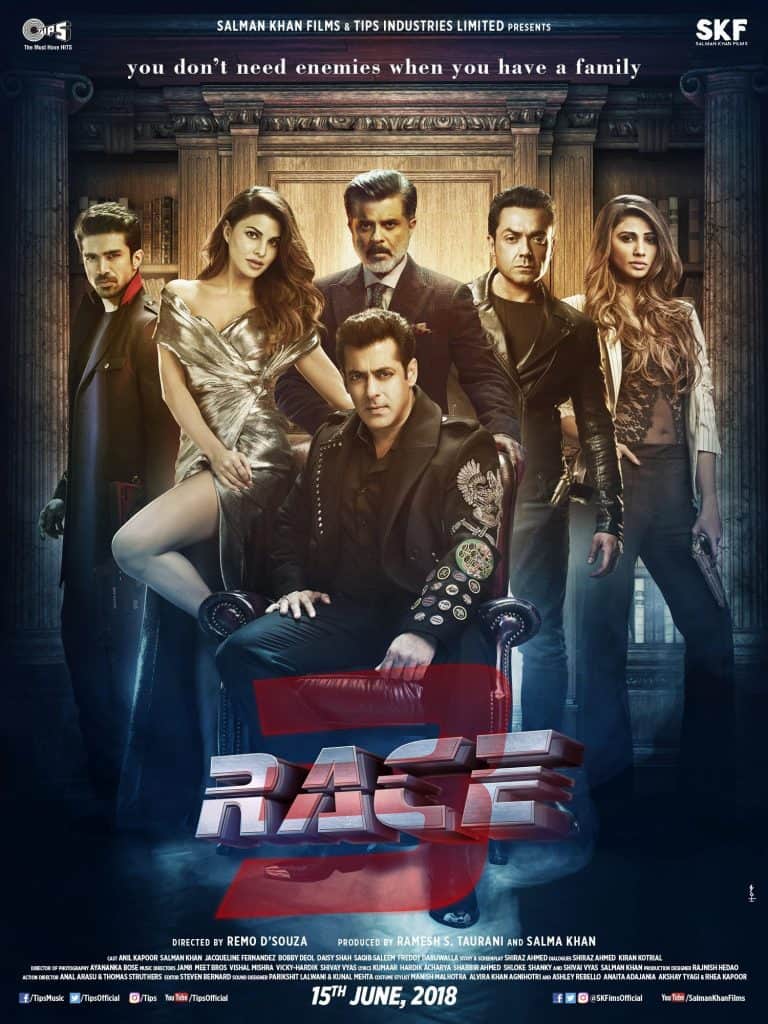 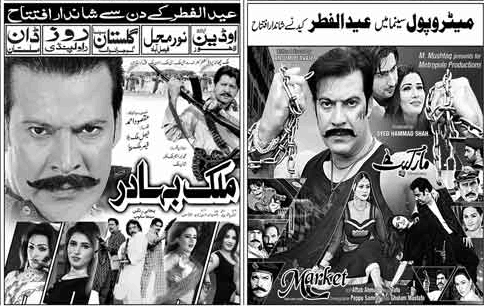 Pashto Films Pashto is the second largest spoken language in Pakistan after Punjabi. Pashto cinema was the third most successful film circuit after Punjabi and Urdu films. Unlike Urdu and Punjabi cinema which faded a decade ago, Pashto cinema has survived well despite dismal situation of law and order in its circuit. Pashto cinema seldom gets the attention of the mainstream media, still Pashto films have successfully retained their viewership . Pashto cinema has its own dedicated circuit in the province of KPK, Balochistan (Quetta) and Sindh (Karachi only) where native Pashto speaker live in large numbers. Apart from Pakistan, Pashto films sometimes are also released in UAE (Dubai/Sharjah) and Afghanistan (Kabul). The leading artists of the Pashto cinema are Shahid Khan, Jahangir Jani, Arbaaz Khan and Ajab Gull. Four Pashto films are expected to release on this film namely Paidageer (پیدا گیر)  , Ziddi O Badmash (ضدی او بدمعاش), Zandaan (زندان) and Kashar Khan Loafar Da (کشر خان لوفر دے). The trailer of all these Pashto films are available online, but here only one poster is added. 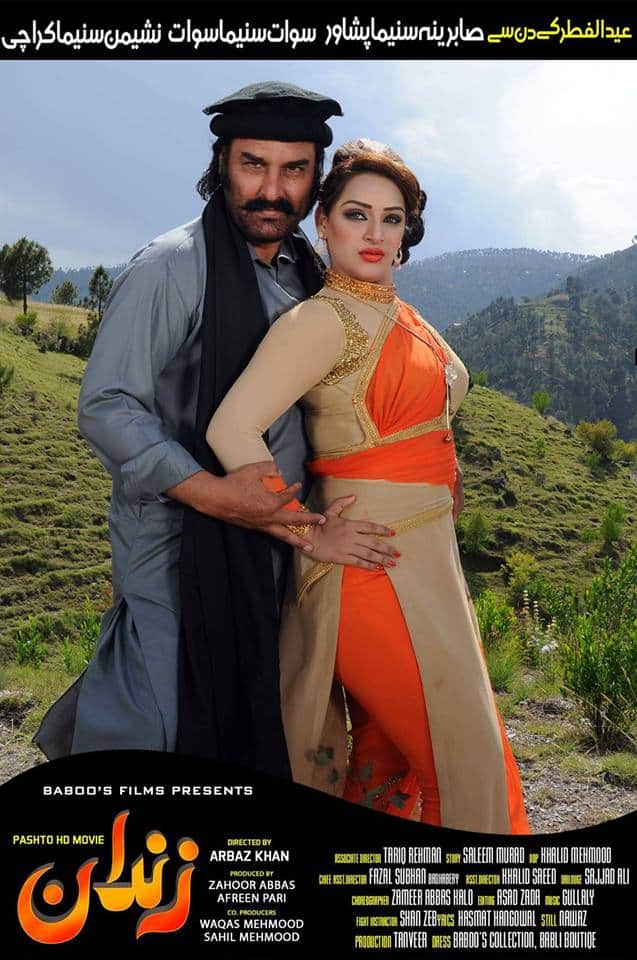 So it sums up this compilation of the films coming on Eidul Fitr. All the four Urdu films of Eid are of diverse genre so hopefully we can find one of our choice. Wish all the readers a happy and prosperous Eidul Fitr. Keep supporting Pakistani cinema. Thanks for your time.   Rashid Nazir Ali