Grey’s Anatomy (Made in Pakistan) to air on Hum TV- Rumour or news?

Hum TV  has been lucky enough to have successful projects one after another in hands that keep its viewers bind to the channel. I recently found out a news on a social media that the channel would soon come up with a Pakistani Version of Grey’s Anatomy, which is an American Television medical drama been aired on ABC Channel. Making it easier to understand to the people who never followed any of the nine series of this American drama, the story is somewhat similar to the Indian Sanjivini and Dil Mil Gaye, where the fictional lives of the surgical intern and residents have been showed. It is a journey of how newly graduates turn into a professional doctors.

If you go back to the eras of 90’s, you will find Marina Khan’s Dhoop Kinaare which was based on same storyline too. Now that if the news is true, Hum TV has again all the chance to increase its ratings like anything as the cast which has been shown in the poster, comprises of celebrities who together can break the TRPs of any popular show. We can see Fawad  Khan,  Sanam Baloch, Javed Sheikh, Imran Abbas, Humaima Malik, Hina Bayat and Shehroze Subzwari in the poster. 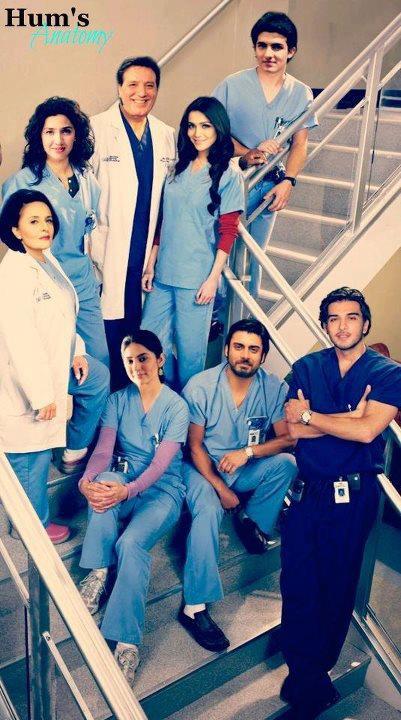 While I was reading the comments of the people on a social media, people are confused whether they would be liking the local version of their favorite American drama or like previous projects, this one would be a disappointing too. Many think its a photoshopped image, Though whatever it is, if such kind of a thing appears on screen, how would you take it, Share your views!

It might be a photoshopped image revolving like a fire on social media, but there is one thing for sure, all the celebrities look amazingly good in the avatar of doctors and surgeons :)