So episode fourteen is here and oh how grim! It’s like the Grim Reaper has seen Abrar house and has decided not to leave it, he came, he saw, he stayed. The last episode ended with Fizza calling Momina but this episode didn’t reveal what the conversation was about. Contrary to my prediction Arham did show up at the coffee house to tell Momina that he will welcome her and Sami gladly in his life but as it turned out Momina never wanted Arham to accept her condition. She either deliberately suggested this idea because she was sure that Arham will not comply or it was something that Fizza said that made Momina change her mind afterwards. Either way it looks like Arham has had enough and there is no way he is going back to Momina after this rejection.

The next day when Arham shows up at the dining table he is pretty worked up and it is evident from the dark circles around his eyes; suggestive of how tired he is and probably symbolizing his defeat for he finally agrees to marry Fizza. Arham will be leaving for Dubai soon and the idea is to get him engaged before that but he makes it clear that he isn’t ready for marriage just yet which is smart of him. Marrying Fizza out of spite for Momina would have hurt Arham more than it would have hurt Momina.

In a rather grim turn of events Abrar is killed by a couple of petty phone snatchers. Surprisingly one of the snatchers is none other than the one and only not so good for anything Qasid. Now this part was a bit extra. It is so insulting when a writer over-explains something considering the audience is dumb and that is what happened when Abrar removed the cloth off of one of the snatcher’s face to reveal that it was Qasid and instead of just getting shocked and dying right there he had to add that overly used dramatic “QASID! TUM?” 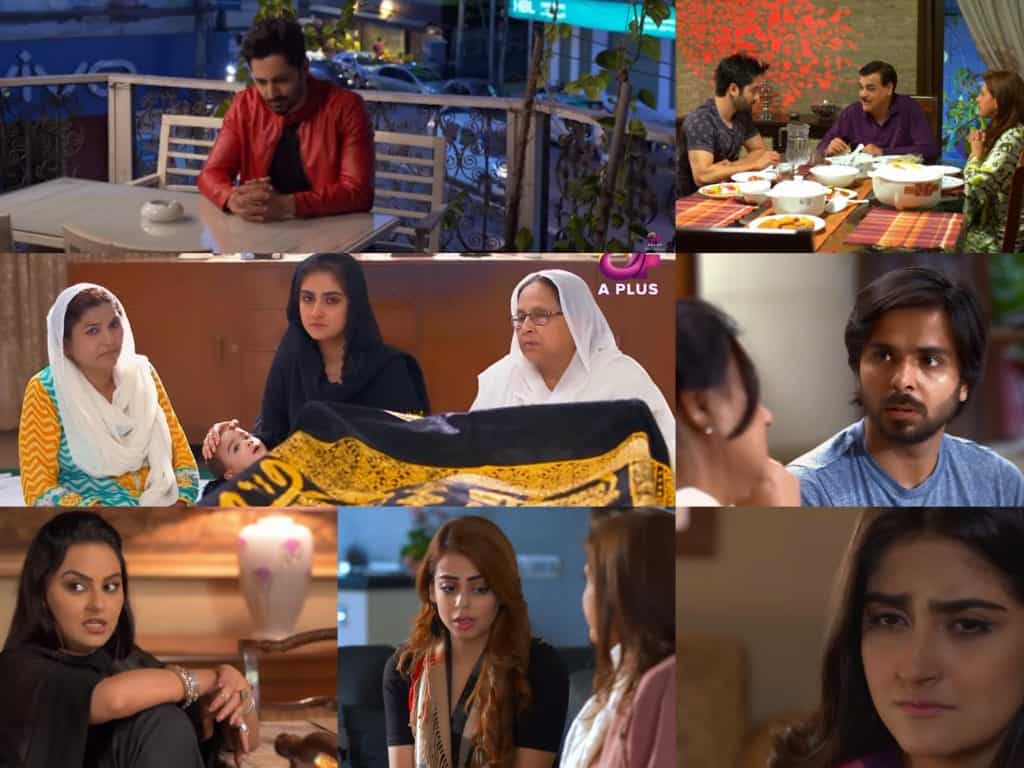 Later the police finds out that there was a CCTV camera right at the street corner where Abrar was killed so it looks like Qasid doesn’t have much chance of escaping. I lauded the actor playing Qasid for his acting in the last episode but this time he was a bit of a disappointment. Being at your Khalu’s funeral the one that you actually killed but no one knows about it and consoling your Khala while getting interrogated by police there is so much potential in the scenario he is in right now but he didn’t avail any of that screen time well. He is not a professional killer and what he did was done in the spur of the moment he is clearly scared but it is too obvious yet very poorly done.

Abeer is still on her college trip as such events unfold back home. She isn’t answering any calls, probably the teenage angst, but she has no idea how much she will regret doing it. I also lauded Seemi Pasha’s character Amtul in the last episode and writers keep jinxing everything I appreciate. Amtul is really mean to Momina when she calls to inform that her father is dead and even after hearing the news Amtul didn’t have it in her to say a single word of kindness to Momina which is downright callous and inhumane. She might be prejudiced but she is a human being in the end and no human is heartless enough to hang up on a young girl who just called you to inform that she has been orphaned, it is hard to buy.

They are about to get engaged but Arham is as cold toward Fizza as he was before so Fizza’s inclination to marry him anyway is something hard to understand, this can only be explained by the fact she is stubborn and just needs to own Arham for the sake of it.

Overall this episode had really heart wrenching scenes when Momina is mourning her dead father and Danish also did well in this one but some of it as usual was average. The show has started losing it’s uniqueness in the regard that characters are now being portrayed as evil and we are back to the “the world is black and white” routine and the same old raqeeb routine. I have said this before and I will say it again those evil characters are boring, prosaic and over used. The only thing that is keeping this show going are the on and off deaths and events like babies getting kidnapped.

In coming episode we will see the return of Abeer and some more details about this angry teenager’s college life. Till then stay tuned.

How did you find this episode of Haara Dil? Do share with us.