Hasan Ali might be the new jeeja of India

Cricketer Hasan Ali will tie knot to Shamia Arzoo, a Haryana-based woman . The wedding is reportedly taking place at Atlantis, The Palm Dubai on 20th August. 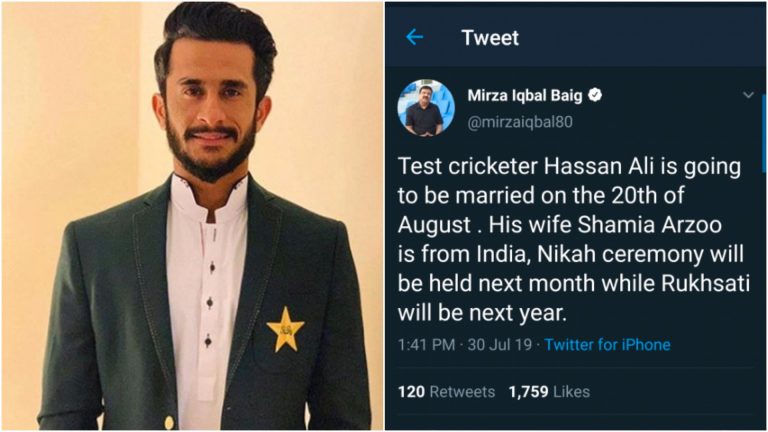 The internet is going crazy over this news of Hassan Ali’s marriage and the meme game started:

Hasan, who has played nine Tests and 53 ODIs, played an instrumental role in Pakistan’s 2017 Champions Trophy triumph. Shamia, studied engineering and  presently working as a flight engineer in Emirates Airlines and lives with her parents in Dubai, with some of the family members in New Delhi, said the report. Quoting family sources, Geo News further said that Hasan first met Shamia through a close friend in Dubai.
After Shoaib Malik  had married Indian tennis star Sania Mirza on April 12, 2010. The couple also have a son named Izhaan Mirza-Malik who was born on October 30, 2018. Another Pakistani cricketer is hoping to find his life partner from across the border. According to some reports, Ali and Shamia’s  nikkah ceremony will be held on August 20 in Dubai.
Furthermore, Hasan has tweeted since clarifying that the families are yet to meet so nothing is set in stone at the moment, and he’ll make a public announcement soon.

Hassan Ali came forward to clarify that it’s not confirmed yet, but it could be. Fans  were  sending love and best wishes for Hasan Ali.  Cricket fans ae waiting desperately to know what’s gonna happen next.