Pakistani drama industry has grown incredibly over the years. Private channels and producers have changed the trends completely. This has also resulted in increased competition to get the viewers to tune into a specific channel. It was due to this competition that TRPs came into existence. The advertisers wanted to know which content was worth sponsoring and that is when there were special meters attached to specific areas that gauged which channels the viewers were tuning into at a specific time. While it is easier to gauge the popularity of a drama online since the views speak for themselves. The discussions and trends on social media are also an important indicator. The ratings of a drama however are of utmost importance for the channel, producers, and everyone involved. The rating system is considered dodgy but these are the only parameters available therefore all the channels gauge their ratings using the same method.

A drama that does not bring decent TRP is considered a loss by the channel even though it might be liked by a certain section of the society. Over the years, many writers, producers, and directors have talked openly about the changes they had to make to the dramas they were a part of because there are certain formulas that garner TRP. The most basic formula to date is that a strong woman is mostly seen as a threat. The viewers who decide which way these ratings will go apparently love watching a woman being victimized. Everyone in the industry agrees that a drama showing a strong woman such as Kankar and even Dil Lagi couldn’t get the kind of viewership with dramas such as Adhoori Aurat and Mann Mayal got in the past. There are times when a drama suddenly got more TRPs than ever before when a strong woman was hit or was thrown out of her house as was the case in Dil Lagi. 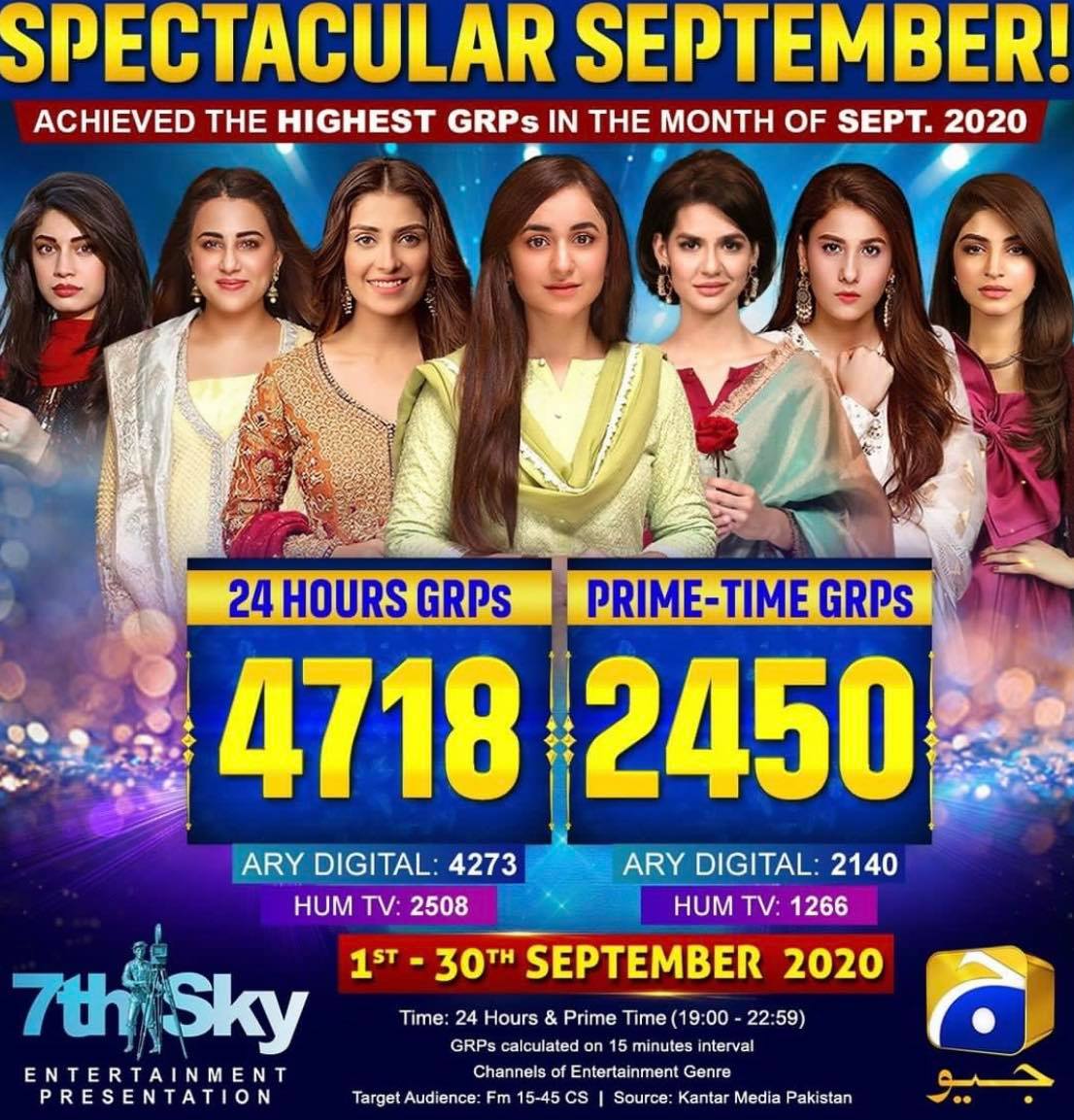 Since these numbers decide how much revenue the producers and channels will gather in the form of advertising, they are bent on making dramas that will attract such viewers. Therefore, the writers are forced to add scenarios showing the woman as a victim. For every strong female character, there must be an equally weak one in the drama if it is to appeal to the viewers who are responsible for these ratings. There are of course those viewers as well who do not want to watch such dramas but clearly, they are fewer in numbers.

The only way for anyone to know the ratings of a drama is the channel itself. They are the ones who post the TRPs of those dramas which are at the top of the game. The highest TRP dramas list has been made based on the ratings posted by the channels in the past 4 weeks. Some of the viewers will surely be shocked to see the kind of content which is being watched by the public on daily basis.

Pakistani dramas air on 3 different time slots, 7, 8, and 9 pm. The rest of the day mostly these dramas are repeated on the channels or there is content other than dramas. These time slots are the center of competition for all the channels. Here is a list of the highest TRP dramas right now.

Nand airs at 7 pm and it is definitely giving ARY much-needed ratings which they love to display on social media. It won’t be wrong to conclude from the figures that airing a drama 4 times a week is working for the channel. Like every other drama which is on this list, this one also has an extremely negative character and a woman who is a victim.

Jalan might be criticized by people on social media and it was also temporarily banned by PEMRA but it is also the most-watched drama right now. In fact, Jalan’s popularity skyrocketed when it was banned. This is yet another story about two sisters fighting over a man which appears to be a favorite with the general public.

Raaz-e-Ulfat airs on Geo and lately, it has been getting more ratings than ever before. Ever since the story took a tragic turn and a forced marriage was shown, the TRPs went higher than ever. It is the most-watched drama serial at the moment because people are totally invested in Mushk’s story.

Muqaddar is another drama airing on Geo which is way ahead of the competition. It is a story covering a politician’s desire to marry a young woman and lately it has turned into a power struggle between this young woman who is now his wife and his first wife! Clearly, the people responsible for these ratings love watching women fight over a man! No wonder the producers use this tactic to allure the viewers repeatedly.

Meherposh is not getting as much rating as some of the other Geo dramas on this list but when compared to the other channels it is way ahead of the game. This is another one of those dramas which showed a divorce right at the beginning of the story and later on it took a romantic turn. It has also been full of tragedies that appear to be the ‘rating generators’!

Umeed is a soap which has been on air for many weeks now. It has also been getting more ratings than any other drama on all the other leading channels in the same time slot. There was a time when Pakistani viewers were not very welcoming of soaps but that does not seem to be the case now.

Uraan started a few weeks back and it is already getting good ratings. Last month Uraan was on top of the TRP charts more than once. Uraan has been another one of the commercial dramas which is essentially a love story. It is a drama followed by even those viewers who generally do not tune into Geo.

Tarap is a 9 pm drama and only recently it started getting ratings as the story took a tragic turn. Tarap’s TRPs are not as impressive as some of the other dramas on the list which shows that most of the dramas which get a really high rating either air on ARY or Geo. 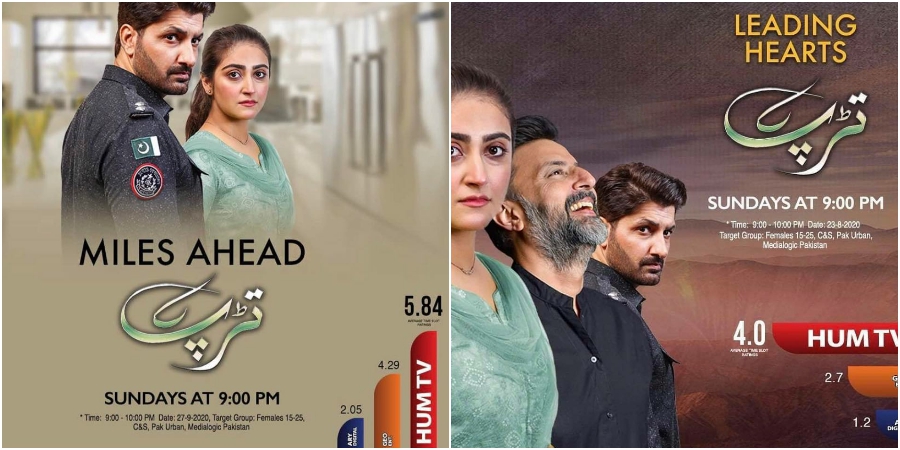 Among all the dramas airing on HUM at the moment at 8 pm, Sabaat seems to be doing relatively better. More than once last month Sabaat was leading the spot with TRPs which were not too high but they were higher than the ratings the other dramas in the same time slot got. 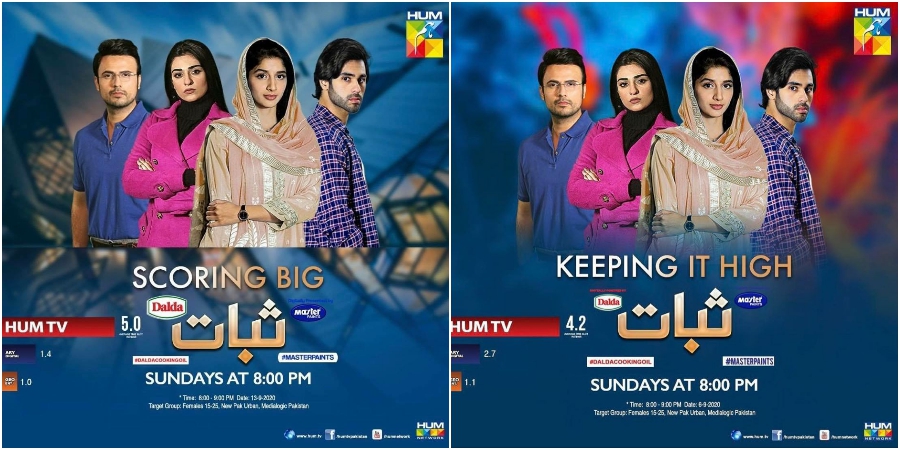 The ratings of all these dramas say a great deal about why we constantly get to watch dramas which according to many of us are not up to the mark. That is why the actors and the writers request the viewers to watch quality dramas but it is certainly not happening! There are many dramas on air at the moment with different storylines yet they are not generating revenue for the channels or the production houses especially when compared to these other dramas. Geo is leading the TRP race with ARY Digital on the second and HUM is lagging far behind. The facts and figures are different from the likes and dislikes of many of the viewers on social media and our website.

Did these ratings disappoint the viewer in you who wants to see a change in the present trends? Share your views.