Ohkay so, some developments in this episode of Hum Kahan Ke Sachay Thay seemed totally rushed & out of place but there were a few bits & pieces that were convincingly done & showed a different perspective. Although I will still say that it was an enjoyable episode because one thing is for sure, as a viewer, I do enjoy watching the reactions of most of these characters. I also like the fact that Mehreen, despite everything mostly never in her favor is not shown to be a typical ‘bechari’. The way she reacts to things & as seen in this episode, giving away a half-truth to Saffan shows that she has her own defense mechanism & knows how to bring herself out of certain situations.

Aswad’s character is not really coming across as impressive. So far he hasn’t shown many personality traits that make me like him. His submissiveness in front of his mother seemed a bit out of the blue. All it took was one tantrum from Saleha & Aswad immediately forgot about the committment he sort of had made to Mashal. This highlights one point perfectly that Aswad is a quitter, he doesn’t really believe in taking challenges or emotional burdens & even in the later stages of his life, he will find out an escape as soon as he feels things are not working out for him.

It was a bit too obvious that Aswad will resort to the typical excuse of ‘ammi nahi maan rahin’ & find a way out of whatever he had with Mashal. As a son, his feelings towards his mother & the respect he has for her are genuine but that doesn’t give him an excuse to be a coward who can not make up his mind & back out of his promises. Aswad’s confusion was also elaborated a bit more where he was trying to wrap his head around everything that was going on. He did not expect Shagufta or even Mashal to behave the way they did where they were trying to bring him on their team & gang up against Saleha. I still however liked the fact that Aswad made it clear to them that nothing matters to him more than his mother, therefore he will not entertain any such person who will speak against Saleha. Aswad was quite disturbed with the conversation & didn’t really know how he wanted to react to it all but to add more to his confusion was Mehreen’s answer.

I’m glad the director decided to show a flashback where Mehreen thinks of what Mashal has been doing & how Mehreen warned her lately – this gave a pretty clear picture of why Mehreen decided to accept Aswad’s proposal. This was definitely her way of getting back at Mashal. For me, the most convincing part of this entire episode was Mehreen’s reasoning behind rejecting Saffan. If Mashal hadn’t done what she did, maybe Mehreen wouldn’t have thought of getting married to Aswad. She was actually ready to let go of the love she had for Aswad & was ready to move on with Saffan because she knew this was the escape that guaranteed a fresh start in her life but Mashal took that away from her. Mehreen actually didn’t want the memories of her or her father’s past to haunt her in her future but Mashal ruined it for her. I think her reasons were justified because she has lived all her life with these taunts that the thought of any of it reoccurring in her future was unfathomable for her. It also shows that Mehreen has this surety in her heart that at least in Saleha’s place, she will not get to hear those things. So far, she has no idea how Aswad will treat her but for Mehreen, this seemed to be the right thing to do. 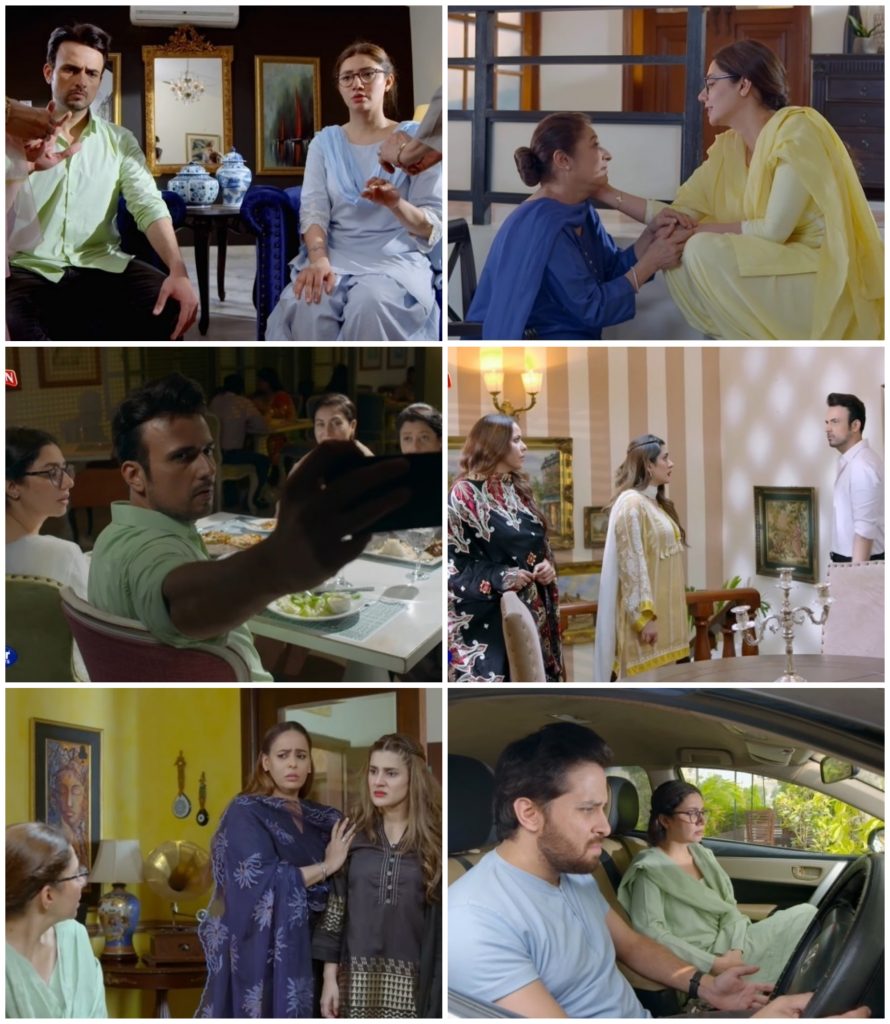 The reactions of all of the family members were quite expected. Mashal’s ourburst, Shagufta & Tahir’s display of disappointment & anger & then Nani’s attempt at emotionally blackmailing Mehreen. I found it rich coming from Nani who even had the audacity to use her ‘connection’ with Mehreen to talk her out of this marriage. As if she was a very loving & affectionate Nani that Mehreen would regard her opinion. I am glad Mehreen stood her ground & let her know that she was never going to say no. The slaps Mehreen received somehow also strengthened her faith that she has made the right decision. It was really interesting to see how this particular decision of Mehreen was driven by so many emotions towards people in her life. It took them years & years to humiliate & degrade Mehreen, but for her, it was just this one single decision that literally took away their peace of mind for the rest of their lives. Mashal is going to suffer emotionally & looking at her, Shagufta will suffer too. I found it amusing with Shagufta telling Mashal that there was no comparison between her & Mehreen – if that was the case, why did she ruin her daughter’s personality by comparing her to Mehreen all her life?

I am glad that from Mehreen’s side, there was a lot more clarity in regards to her decision but when it comes to Aswad, all that I know is he said yes because of Saleha. He was still pretty unsure of what to do but because Mehreen said yes & Rabia showed up with a ring, he surrendered. The post-engagement dinner was awkward & what made it a bit more of it was how both Saleha & Rabia literally turned a blind eye to Aswad & Mehreen’s forlorn faces. I wouldn’t expect much from Rabia because Mehreen has always shown this emotional disconnect to her but Saleha is pretty wise & picks up these intricate details but it seems she was too blinded by her happiness that she failed to see what they both were going through. I must say I loved the scene of Saleha thanking Aswad & showing him how proud she was & how he has always been a source of happiness for her. That scene was brilliantly acted by Huma Nawab, where you could actually see what Saleha was feeling as a mother.

Saffan’s reaction was understandable where he already knew about Aswad & saw his fear materializing but Sheeba’s reaction on the other hand was also quite out of the blue. She has seen how Mehreen has been kind of obsessed with Aswad. For any sane person, it wouldn’t have taken much to realize that Mehreen had feelings for her cousin. All this while Sheeba enjoyed listening to Aswad’s stories but now she immediately cut ties with Mehreen because she called her engagement off with Saffan? Like I said earlier, Sheeba should’ve been a bit more concerned for her cousin instead of listening to Aswad-nama from Mehreen with keenness all this while.

This episode of Hum Kahan Ke Sachay Thay was definitely interesting. There were quite a few continuity issues which served as a distraction but definitely didn’t take away from the convincing performances of all the actors. I will say they have taken their sweet time in establishing Mashal & Mehreen’s characters, their equation & their personalities, therefore it’s about time they take us through Aswad’s character too. It definitely is quite obvious that he too has certain issues, some inhibitions & a few complexes, therefore it is important to learn more about him. I really wish they just don’t show him as a toxic partner & there is more to his personality – even if they are the negative traits that he has displayed all this while.

The engagement scene seemed a bit too random, Aswad’s decision of getting married to Mehreen if she says yes was also quite random too. It also highlighted the fact that Aswad doesn’t believe in taking responsibility because he threw the ball in Mehreen’s court & when she said yes, he was flustered because he was sure that she would say no & that might give him a chance of marrying Mashal. Even when he was speaking to Mashal for the last time in the car, he wanted to make sure Mashal knows that he never really made any promises to her, which is wrong. For a person who has commitment issues, one can only wonder how hard things are going to be for Mehreen after she gets married to him. Direction, acting, background score, editing – each & every aspect gets full points, however, I will say that the story is too plain but the complicated characters definitely make it a very interesting watch. Please share your thoughts about this episode of Hum Kahan Ke Sachay Thay.