There is good news for all the ‘Khuda Aur Muhabbat’ fans out there as Imran Abbas Naqvi and Sadia Khan will be seen again together on screen. The couple gained immense popularity through this hit show and their chemistry was the talk of the town. This time they will be seen together in a movie instead of a drama serial. ‘Abdullah’ is an upcoming Pakistani movie which is based on the incidents that happened in Quetta on 17th May, 2011. The rest of the cast includes names like Sajid Hassan, Hamid Sheikh And others. The movie is written, directed and produced by Hashim Nadeem. Hashim Nadeem is a popular writer who is also the writer of the show ‘Khuda Aur Muhabbat’ and this movie is also based on a novel written by him.

It is good to the see the initiative taken by people to revive the Pakistani film Industry. After Shoaib Mansoor, many producer and directors have followed his lead and invested in movies. We already saw brilliant movies like ‘Chambaili’ and ‘Ishq Khuda’ this year and the brilliant Tarang Telefilms which were a breath of fresh air for us viewers. The upcoming movie ‘Main Hoon Shahid Afridi’ is one of the most hyped movies nowadays and ‘Abdullah’ is another addition to the list of movies that are worth looking forward to.

“Truth exists in the world just as flowers do in desert” The story of a truth untold!

This is the tagline of this movie and it seems pretty intriguing!

Here is the first look of Abdullah: 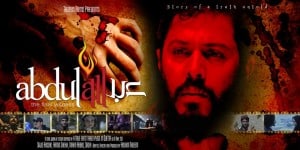 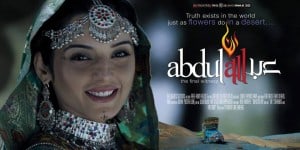 Let’s see how this movie turns out to be!