A number of topics were whirling in my head until I got the news that WAAR is going to hit the international cinemas soon. I opened my writing pad and starting to write about the incredibly directed film of the year and the international applause which it will gain after receiving tremendous appreciation, here in Pakistan. It is not irrelevant to mention here that the movie is anxiously being waited in India as well – Our arch rival. The story of the movie revolves around the theme of terrorism in the country and it has been filmed with the support of the all-powerful military, police departments and government organizations.

Bilal Lashari, the talented director of the film, said about its international release:

“We are still talking to distributors and we are trying to finalise the release dates because we want to release it simultaneously in many countries that’s why it’s taking bit of time. All our focus was on releasing it in Pakistan initially and now we are working on the international release. Within a week or two weeks it should be decided when is the international release date. It’s possible but again it’s not confirmed so I don’t want to give away dates until it’s confirmed. We are still discussing and as soon as I find out the final date I can let you know.” 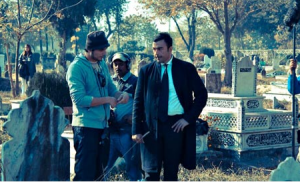 Some sources say that WAAR is going to be released on 11th Dec, 2013 in UAE, U.K and U.S but the director has not yet confirmed the dates. Whenever it is going to be released, it is crystal clear that the way it broke all the records in Pakistani Cinemas, it is definitely going to clinch top titles abroad as well. Even Bilal Lashari himself is very excited on the international release of his very first film. He says:

“We are looking forward, in fact can’t wait to, honestly. Now more than ever because we get all these messages everyday inquiring about its release, especially the UAE and in Dubai there seems to be a big market there.”

WAAR is doing great business in Pakistani Cinema. Though the film is bi-lingual (English and Urdu) it still didn’t fail to do excellent in all provinces in Pakistan. On this, he views are:

“Not just the urban market we were targeting all of Pakistan, (though) the language is bi-lingual but that’s also due to the flavor and international distribution as well. But at the end of the day it’s a very visual film so the language is really secondary. It’s a kind of film that even if you mute the dialogues you can understand because it’s a visually driven film. The film has got incredible response; the movie is on its way to be the highest grossing film ever in Pakistan. We’ve almost reached that point, in fact in recent times no film has done as much business. Lot of cinema halls in the interiors of Pakistan has been renovated because this film got them that much business so it exceeded everyone’s expectations. Not just in the main cities but in the smaller cities as well”

It is an action thriller, drama-film movie and was one of the most-awaited movies of the year. The film is a stylized depiction of events surrounding the war on terror in Pakistan, including the attack on a Police Academy at Lahore in 2009. This association of the movie with real events made the movie more appealing for the viewers to watch. Moreover the cast of the movie is amazing. From Shaan to Ayesha Khan to Bilal Lashari himself added glitters to the movie. Till today, the movie has earned Rs: 200 million and is definitely going to do exceptionally well in the international cinema as well.

All of us wish best of luck to Bilal and his team.

Those who have not yet seen the movie go and grab your movie-ticket and those who have already watched it, please share your views underneath