Ishqiya’s first episode was pretty decent and even though it seems like the story doesn’t have anything new to offer but this was definitely the kind of episode which kept my interest alive. All the central characters were introduced with utmost clarity in this first episode – which was great especially considering the fact that I have watched enough dramas lately in which the families of the central characters are most often introduced later on. While Feroze Khan and Ramsha Khan are playing the kind of characters they have played in other dramas too before, Hania Aamir’s character it seems might be different from the one she played in Anaa and Titli. Also, I honestly feel that Hania Aamir is an amazing actress who brings out the nuances in her characters exceptionally well. All the actors involved performed well, the background music at times was annoying but overall this first episode was fast-paced and engaging.

The Title and First Impression

When I searched Ishqiya on Google to find out about the cast, that is when I realized that there was a Bollywood film with a similar title too. I am not sure if this is a coincidence or not but it would be great if our producers can be a little more creative while finalizing the title for their dramas! After all there are so many different options! I am going to admit that I watched this first episode with the least bit of expectations especially after watching the highly disappointing and OTT first episode of Jhooti. The fact that I managed to sit through this episode without questioning the cast and the presentation in general was reason enough to take it up for reviewing until something better comes along. 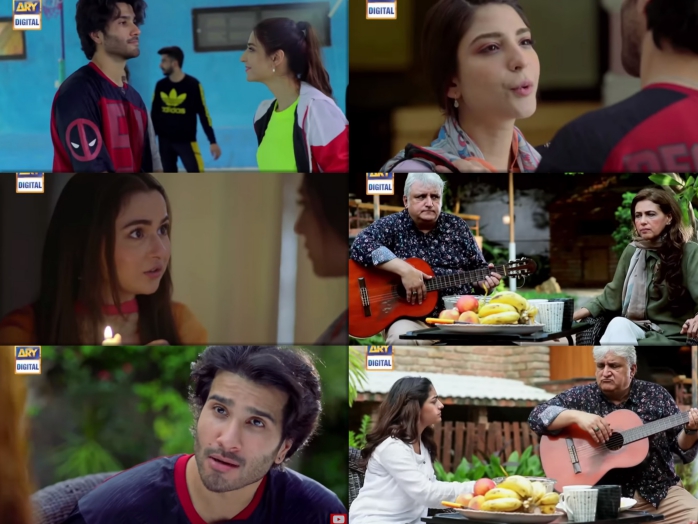 The opening scene wasn’t impressive, my first thought was whether a university would allow their student to wear shorts on campus. Apart from that the background score made the whole scenario more filmi than fun. As the story progressed and the characters were introduced, there was more clarity and even though Ishqiya seems like another story which will revolve around relationships but this first episode was definitely more interesting than the opening episode of Jhooti which was all over the place. There are some clichéd but definite conflicts in the plot right from the beginning and if handled well it would be interesting to watch how all the characters handle these conflicting situations.

The Characters and The Story

Ishqiya’s story revolves around three different families and four main leads. Thankfully the conflict in this story isn’t one which involves class difference. Hamna (Ramsha Khan) and Hamza (Feroze Khan) are madly in love. Hamza is in a position to show this ‘madness’ since he has no problem with openly confessing his love for Hamna. While on the one side Hamza is shown as an angry young man with a romantic side, on the other hand he is introduced as a genius – someone who does wonders in his studies even though he does not fit into that studious student stereotype. Although that sum he solved on the board didn’t seem too difficult but it did imply that he was a good student. Hamza’s father (Khalid Anam) is really cool and the entire atmosphere in his house is completely different from that of Hamna’s. The contrast between the two households was quite apparent from all the scenes shown in this first episode.

Hamna has a sister Romaisa (Hania Aamir) who has a personality very different from that of Hamna’s. While Hamna is in love and afraid to disclose that secret even to her sister, Romaisa is more than happy living her life which is quite carefree to say the least. Romaisa is shown as a happy-go-lucky young girl who trusts her father completely with her future. Hamna on the other hand is set to be engaged to Azeem (Gohar Rasheed) by the end of this episode. Hamna and Romaisa’s father (Shabbir Jan) is strictly against love marriage therefore Hamna does not have the courage to tell him about Hamza. At the same time, she does not talk to Hamza about the proposal because she is scared of how he might react to it. Everything happens too quickly and Hamna’s worst fears come true. 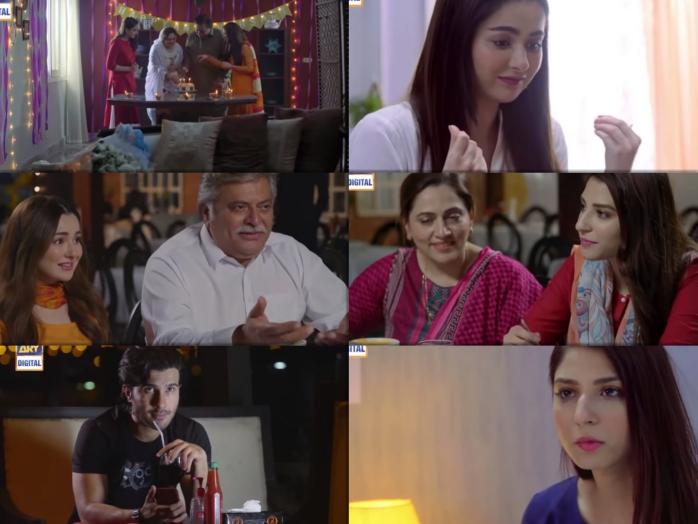 The conversations and situations through which all the characters were introduced in this episode were for the most part convincing. It was easy to connect to the situations. The scenes covering the family life of the main leads were more entertaining than the scenes which were shot in the university. Having said that, the university scenes were important because they showed the intensity of Hamza’s feelings for Hamna. This part of Hamza’s personality will probably play an important role in creating an even bigger problem in the upcoming episodes. Hamza gave Mir Hadi (Khaani) and Adeel (Gul-e-Rana) vibes but I really hope that his character does not get too dark.

Sadly enough, like always ARY has summarized the entire plot on its website. Therefore, we know exactly what is going to happen in the next few weeks. And once again I regret visiting the website to get information about the cast and for the teasers! All those viewers who don’t want spoilers should not visit the website.

While watching this episode I kept on wondering why Hamna could not share her secret with Romaisa who seemed quite ‘cool’. It would have been good if the writer answered this question instead of showing that Hamna just didn’t have the guts to do so! Also, why couldn’t Romaisa see that her sister was not happy with the proposal and that she was worried.

Some of Romaisa’s dialogues were hilarious and I enjoyed her cool and cute attitude. The parents’ characters were interesting too since they were not one-dimensional.

The preview of the next episode showed Hamna’s father pleading her to safeguard his honor and her meeting with Azeem suggested it would just be added pressure.

Did you watch the first episode of Ishqiya? Do share your thoughts about it.