Jago Pakistan Jago – Can It Get Any Worse?

Whenever the viewers think that Pakistani morning shows can not stoop low any further because they have already reached that line, they surprise us by touching the new lows, by pushing the new boundaries and by exploring the new horizons with even more atrociousness never seen before! Even though most of the sensible viewers have absolutely no expectations from these shows but they continue to employ cheap tactics to get ratings which are even devoid of logic.

It is a fact that the morning shows which revolve around the subject of makeup and beauty get a lot of ratings that is why the channels keep on conducting more shows which are filled with such content. The morning shows these days focus on teaching makeup by inviting different makeup artists as well as holding makeup competitions where they give a platform to local makeup artists so that they can showcase their talent, which is a great initiative but the way these shows are carried out leaves one speechless! It makes one wonder who are these people who come up with these bizarre and illogical ideas and you can’t help but question the intelligence of all those people who go along with them because they are getting paid for doing just that!

One such competition is being held by Hum TV’s morning show Jago Pakistan Jago named ‘Mera Makeup Hai Kamal’ this week and to put in simple words, every single thing about that competition is wrong; be it the judges or the challenges that are being given to the makeup artists or the way they are being treated by everyone in general. This isn’t the first time that the team behind this show has come up with the most ridiculous format and the people involved in executing it have done whatever they could to make it even worse! The show in general is always chaotic but this time around because of the way they acted throughout it was difficult to believe that all these women involved were educated working women with tons of exposure. 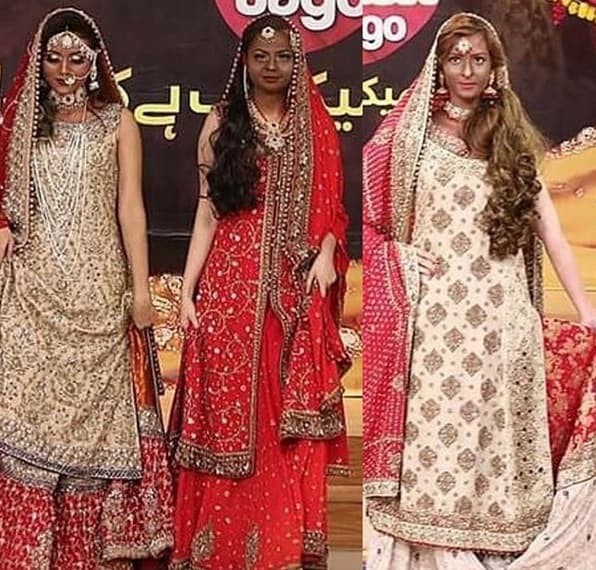 The judges happened to be Amber Khan and Farida Shabbir and let’s just say that they forgot they had to ‘act’ like a judge because they were being way too comfortable in their ‘phappay kutni’ mode. A few days back, Amber’s video clip went viral when the show went live on Facebook during one of its commercial break and we thought she got exposed for being rude but after watching yesterday’s episode, she was still the same even when there was no commercial break. The way Amber was treating these contestants with her high and mighty attitude made her look arrogant and condescending, which is a surprise because she usually boasts about how miserably polite she is. A couple of years ago in one of the morning shows, Farida Shabbir had to do a bridal makeover as well and her makeup screamed ‘face-ruined-by-mohallay-wali-makeup-aunty’, so it was a bit rich seeing her acting as if she knew everything about makeup because girl, you’re mistaken. Amber and Farida literally screamed and misbehaved with the contestants and we are scratching our heads to understand what mode of mentoring is this?

Sanam Jung introduced the contestants in such a manner that it seemed like this show was helping these contestants out in fulfilling their dreams. Although the price money wasn’t a large sum of amount but somehow the host did whatever she could to convince the viewers that winning this competition would change things around for these make-up artists who didn’t all come from affluent backgrounds and needed the money for educating their children or expanding their businesses. Unfortunately, it did look like that was the reason why these rich so-called educated women who were running the show thought they had the right to treat these women in the most disrespectful manner.

The challenge that was given to the makeup artists in yesterday’s episode was wrong on so many levels. Fair models were invited and then the contestants were told to use a dark base in order to show that wheatish/dusky girls can make beautiful brides too. This has to be the most insane way to elaborate their point which they were trying to make that dark girls are beautiful too because none of the model had wheatish/dusky complexion and we really don’t understand why they didn’t bring in the models which fall into that category? They have million times shown how wheatish girls can achieve lighter skin tone so now when they had to prove a point, it was ridiculous that they chose fair skinned models because it just didn’t make any sense and most importantly defied the purpose! Had the host and the judges also carried the look they wanted the make-up artists to give these models, one could think that they were actually convinced that this was a grand idea! While their own makeovers were right on point, the models were tested in the worst way possible by carrying a look which wasn’t breaking any stereotypes but mocked them.

Sanam Jung has time and again mentioned that she is not good at makeup and lacks basic knowledge about it, so it was shocking to see her forgetting her role as a host because even she turned into a judge who was rudely instructing the contestants to do what was being demanded. Just like always, Sanam Jung let her producers and director dictate to her and every time someone shouted in her ear that one of the artists were breaking the rules her reaction was like that of a government school’s headmaster who scolds his students for coming late. 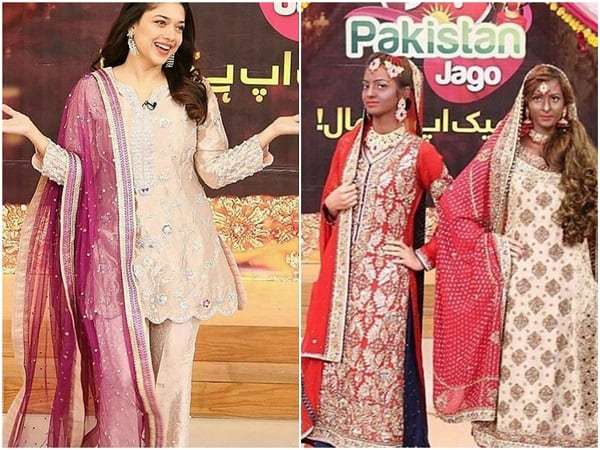 Makeup is a form of art, it is a creative process which is done in a relaxing environment but Sanam, Amber and Farida turned it into a sabzi mandi where literally harassed the contestants for not following their instructions. Amber and Farida should have been tied to the judges’ seat with harnesses because they forgot that this was not some Master class that was going on where they could mentally torture their students, it was a competition and they should have let the contestants do makeup in a very relaxed manner, but oh well, why are we expecting these ladies to understand the basics of something creative!?! As if this was not enough, they also put Mehndi on one hand of the make-up artists so that the would have to do makeup using one hand only? Let’s just ask, how many times have Amber, Farida or Sanam gotten their makeup done by someone who used only one hand? Is this a makeup competition or a boot camp?

The background music was exactly what they used back in the day when they conducted those horror shows based on Jinnat, so it was saddening to see them putting a grave subject like Jinnat and Makeup on the same pedestal. In times like these where they get an immediate feedback on their shows through social media, it is hard to believe that our morning show hosts and their teams choose not to improve themselves and continue to invite such people who are in dire need of learning basics like manners and politeness.

We thought that we had seen it all when we saw Aamir Liaquat shoving a mango in his guest’s mouth but our show hosts keep on coming up with new ways to insult and degrade their guests. It is almost as if they feel that if their guest is not a celebrity, they do not need to treat them with dignity. It is also sad watching these guests putting up with all this nonsense right till the end, we would love to see these people walking out of such live shows or reacting or protesting to the torture they are put through because that is the only way people like Sanam Jung, Amber Khan and Farida Shabbir will stop acting like they are superior creatures who can treat anyone any way they want. Also, next time they want to ‘celebrate’ dark complexion they should do so by inviting dark-skinned models, that should serve the purpose!

If you haven’t watched the show, please do watch the clips of the show which we have added in this article and share your thoughts about them.