Ohkay so, the execution of this episode of Kashf was definitely different than the previous ones. The scenes seemed unnecessarily prolonged & there was a lot of focus on the minute details which could’ve been skipped. The entire time it seemed a lot of scenes were dragged & used as fillers. Probably for the first time, I also found quite a few glitches which made me wonder what went wrong because this episode, in particular, didn’t seem to have been directed by Danish Nawaz himself. Having said that, I will say that I really liked watching Kashf & Wajdan’s marriage & the scenes that followed because that definitely was the best part of this episode.

In the previous episode, Rashida herself contacted Imtiyaz & told him to consider Kashf & Wajdan’s marriage because she found that to be the only answer to all of their problems. Therefore seeing her meltdown didn’t really make much sense. I honestly feel the change of actor, unfortunately, has compromised upon the overall personality of the character. The Rashida that I knew was always supportive of her son, she had a lot of character & was never the ‘bechari’ types no matter how tough or difficult the circumstances were. I feel Asma Abbas has treated the character of Rashida as a bechari who has nothing under her control but the way Lubna Aslam played it, she really would’ve pulled it off gracefully & with a lot more dignity even at this stage of her life when even the roof over her head wasn’t her own. I couldn’t help but think how beautifully Lubna Aslam fitted this character & I actually imagined all the expressions or even a few befitting replies she would’ve given when Dilshad was being dramatic & extra!

Rashia herself was the one who wanted Wajdan to settle down with Kashf & after she realized that all the dreams that Kashf sees are true, she developed this immense respect for her, therefore for her to now mourn over the fact that her son got married to the girl she opposed all her life didn’t really make sense. In my opinion, the entire conversation that Rashida had with Wajdan was so unlike Rashida. Yes, she did like Zoya & has all the reasons to despise Kashf because if it wasn’t for her, she wouldn’t have lost the ownership of her house but still to make it look like she never once liked Kashf was untrue & actually quite unconvincing. I am glad though that Wajdan didn’t let any of it put him or his spirit down & in fact, he continued to make his mother realize that she should be rational about it & accept it wholeheartedly. 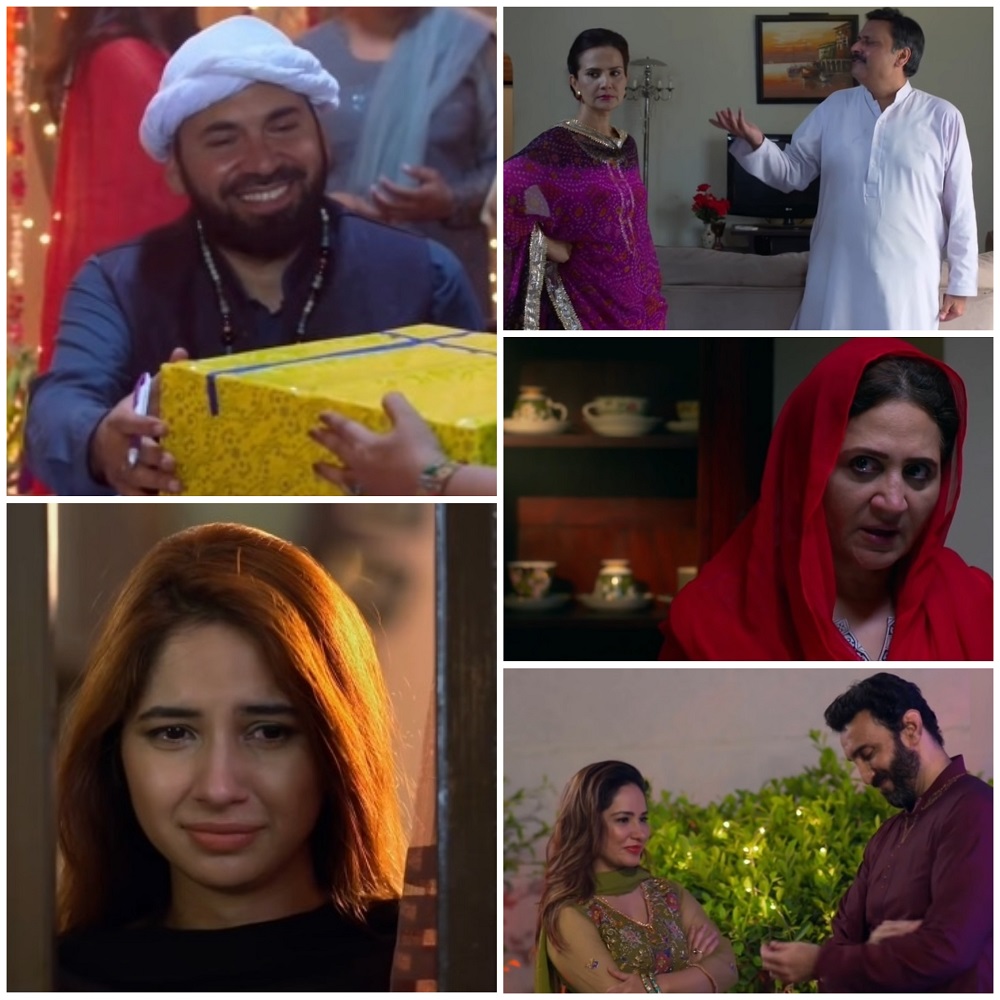 I really wish that out of all the people, Zoya’s curses do not come to harm Kashf because she should be the last person whose prayers related to Wajdan should be answered. Kashf has done enough for the entire family, therefore none of them should be in the position or given the power to utter such gibberish that will come to haunt her or Wajdan in their marital lives. Not that Kashf had any doubts but I am glad she got to hear the conversation that Imtiyaz & Zoya had, at least she will not have any misapprehensions to believe that her family loves her or respects her. This way she will get to be fully committed to Wajdan emotionally & mentally because he will get to be her priority.

At the wedding function, I was surprised to see Irum because she was nowhere to be seen at the Nikkah which took place a day before. Also, at the time of Kashf & Wajdan’s Rukhsati, I didn’t really understand when & how Zoya was able to peek through because it was implied that she chose to stay at home whereas Imtiyaz had arranged a grand venue for the wedding function & that’s where Kashf’s Rukhsati took place. All the scenes covering the wedding functions were prolonged with a few not-so-needed dialogues but then on a personal note, I liked a few shots here & there because they reminded me of the weddings in Pakistan.

I feel Aqmal will continue to listen to Matiullah but he himself has assessed the situation & has realized that getting married to Ashi will benefit him a lot financially, therefore he might go against Matiullah for his selfish reasons. He definitely is going to exploit Ashi. This entire scenario showcased how wealth ends up attracting a lot of negative attention because, in the end, everyone wants to enjoy their undue share of it which they feel they are entitled to. Ashi is being emotional & because she desperately wants to get married, she is blindly trusting Aqmal, which makes me feel for her. Ashi has already been through an abusive relationship, therefore she doesn’t deserve another insincere person to be in her life.

Best Part of The Episode

I must say, I absolutely loved all the scenes that covered Wajdan & Kashf’s life as a married couple. I really don’t remember seeing a couple offering prayers in any drama & it was such a beautiful moment shared by the two. Also, Kashf & Wajdan having a cup of tea after a long day as a newly wedded couple was super sweet. This definitely was the best part of the episode & made me smile because of how realistically everything was portrayed that Wajdan & Kashf were just simply happy. Although Kashf does feel burdened by the dreams that she has seen related to Zoya & Wajdan then she should also remind herself of the times she was able to save her Khala as well as Irum by telling them what could go wrong. It actually means that some of her dreams are just an indication & if she assesses the situation properly, she can prevent certain things from happening, like preventing her Khala from boarding the flight & Irum from getting married to Babar. 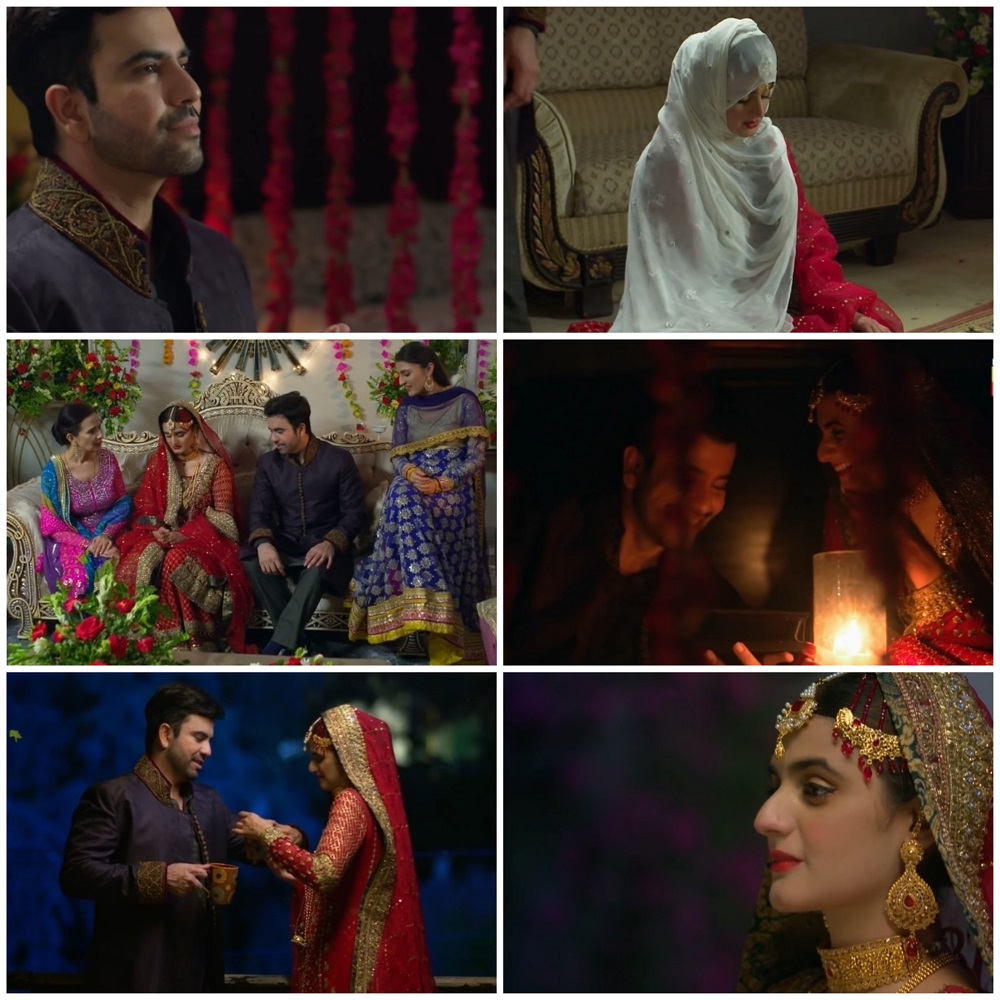 I must say, in the scenes where Kashf & Wajdan faced Kashf’s family, Hira Mani & Junaid Khan’s expressions were phenomenal. They both flawlessly portrayed the awkwardness of the newly wedded couple who knew how the rest of the family members were unhappy. When Imtiyaz walked away after hearing about Wajdan’s plans for honeymoon & they both looked at him awkwardly showed how they both had a grip over their characters because, in reality, their family members were being rude & inconsiderate. All the things that Imtiyaz said to her made me feel uneasy, it seems in order to get Kashf to get back to work, he won’t mind using Zoya as bait because he might threaten her saying that he might get Wajdan forcefully married to Zoya. Dilshad – well the less said the better!

Interesting Despite The Flaws

This episode definitely had some very good scenes to its credit but the execution of the first half in fact most of the episode was quite off. There were a lot of filler scenes but still, they worked at some point & didn’t as well. Waseem Abbas continues to impress. I must say I have never spoken about the actor playing the role of Shehbaz but in this episode, I couldn’t help but notice how amazingly he has acted as well. His expressions were perfect & dialogue delivery effortless as well. Hira Mani & Junaid Khan make a beautiful on-screen couple & their chemistry is amazing. I loved how cute they both looked in those scenes where they were just by themselves, enjoying each other’s company after their marriage.

Sabeena Farooq looked absolutely beautiful in this episode, especially in the scenes where she was wearing next to no makeup, she should definitely keep this in mind & try to use as minimal makeup as possible because she naturally looks very pretty on screen. Despite all the evil things Zoya said, I couldn’t help but notice how beautiful she looked. This episode definitely ended on an ambiguous note with Imtiyaz threatening Kashf in such a manner, however, it was nice to see Dilshad having this much courtesy that she consoled Kashf for once. Please share your thoughts about this episode of Kashf.