Ohkay so, after weeks & weeks, this turned out to be a reasonable episode of Khuda Aur Mohabbat 3. The conversations flowed nicely & made a lot of sense & there seemed to be some progress in every single track. I think they have taken their sweet time the way they wanted to, but now it’s necessary to move the story forward & make every single episode packed with a punch. Farhad’s silence & Mahi’s misery have been dragged to the point where it stopped keeping me engaged but now when they crossed paths, things stopped seeming stagnant, which was a much-needed relief.

Jageerdarni approached Mahi’s mother with a lot of wisdom & sensibility. Although Mahi’s mother had all the right to reject Sikandar’s proposal but the points Jageerdarni put forth were convincing enough for Mahi’s mother to consider everything that she said. I found Jageerdarni’s case to be strong & her points valid because Mahi wasn’t alone to have suffered a heartbreak. Jageerdarni too has lost her son but because she is seeing the bigger picture as she said, she buried the grief in her heart to bring joy to her family & keep it intact. Mahi’s mother who at first thought it was impossible was forced to think things through after she saw the kind of treatment her daughter was getting at Jageerdarni’s place. Sikandar’s kids love & respect her, Mahi feels comfortable, Jageerdarni values Mahi more than ever, therefore her mother got to assess the entire situation which was favorable for Mahi. I am glad that Jageerdarni also acknowledged the fact that if Mahi wouldn’t agree to this marriage, her decision will be respected, this was definitely refreshing to hear!

Romana & Chanda have started facing their own struggles but because they both have each others’ support, they are fighting through. The interaction Chanda had with random strangers showed how things might get tougher for them in the future but for now, this was just an introduction they got with a world outside their secure four walls. This particular incident highlighted the fact that women like Chanda & Romana are always vulnerable & end up being easy target for men. The analogy they drew was another bitter truth they both highlighted because they have seen men from all walks of life, feeling entitled & expecting to be treated a certain way by women who are on their own. 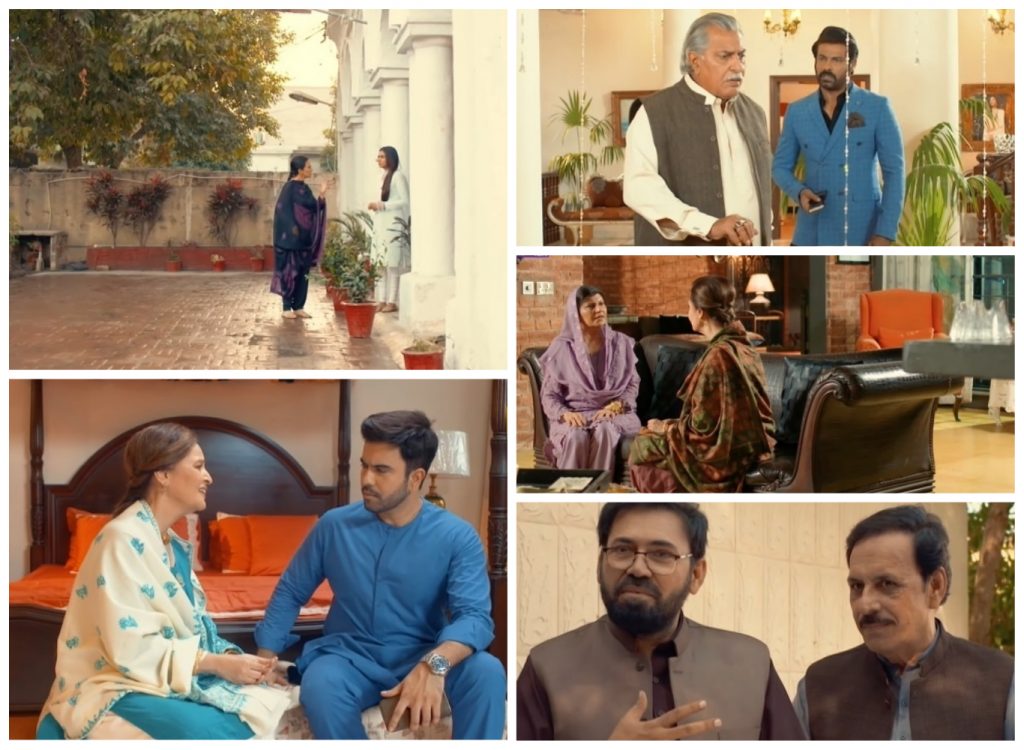 The most important part of this episode definitely was the conversation Farhad had with W&D Dervish. The dialogues were profound & meaningful & I will honestly say I enjoyed listening to Farhad’s questions getting thoroughly answered by the Dervish. I will still say I chuckled when at the beginning Farhad asked him who he was because Farhad may not know but the viewers have so far understood that the Dervish happens to be the writer & director of his journey but yes, apart from that, the rest of the conversation proceeded nicely. This was definitely the first time Farhad’s love was given a new direction. He was shown that using this force of love, he could walk on a very different path, the only pre-requisite was the honesty & steadfastness that he needed to hold onto. I felt this conversation linked Farhad’s Mohabbat to the aspect of Khuda that was so far missing in his journey & the rest of the story. I am hoping after this episode, I’ll get to see the beginning of Farhad’s spiritual journey where he will rediscover himself & understand the true purpose of his life. This was definitely a conversation that was much needed for Farhad to at least have a direction or to understand what he needed to do rather than just wasting his life over a heartbreak. Although Farhad had his own reservations, which stated that he wanted to stay unseen, he didn’t want any attention & also didn’t want to get recognized. It now keeps me intrigued whether Dervish will also encourage Farhad to pursue the love of his life because this seems to be his intention, otherwise he wouldn’t have sent Farhad to Mahi’s house without a reason. 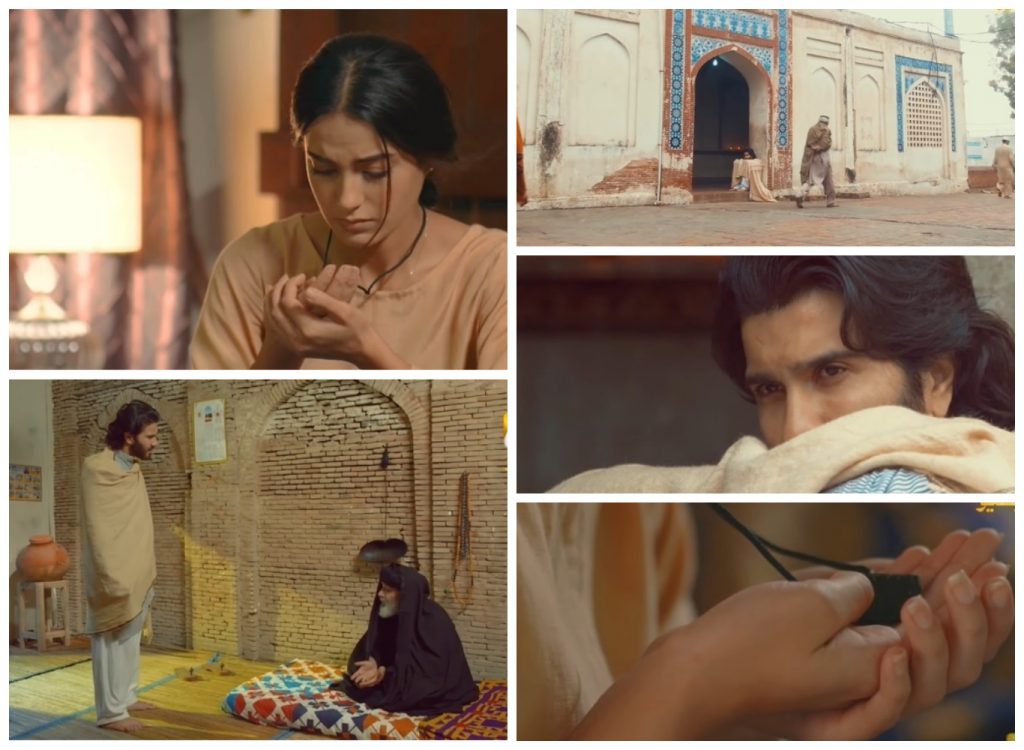 Mahi on her own struggled but this time around, she wasn’t alone & at least had Sahiba as her support system. Another interesting moment in this episode was when Mahi held onto that Taveez & in her mind, she linked it to Farhad’s existence. That Taveez reminded her of Farhad & she couldn’t stop thinking about the fact that it was him who brought it to her place & somewhere down the line, he had something to do with it. Another important development was Farhad finding out about the tragic death of Taimoor, which made him think about all the things he said to her on a parting note. I think more than anything, it’s now time for Farhad to at least feel guilty about his approach towards Mahi’s rejection. Although there’s no need to give such importance to his bad-dua but at least for him, it is going to serve as an eye-opener where he will be forced to reflect where he went wrong.

I honestly enjoyed this episode of Khuda Aur Mohabbat 3 after weeks, so much so that it is making me look forward to the next episode, particularly for the moment when Mahi will come to meet Farhad. I really hope that now when the story is finally picking up, they really don’t drag it & stop with the progress. I still feel for Mahi because right now she is dealing with so much & just when she was about to find the clarity she needed, she will be presented with yet another proposal which she will find hard to reject. Mahi has been through so much, therefore she needs a break but that doesn’t seem to be the case, not in the near future at least. Once again, Mahi will be torn between what she wants & what is expected of her. Mahi also is in limbo when it comes to Farhad because she clearly told Sahiba that before leaving, she wants to meet him for the last time, which goes to show that the thought of being with him has never once crossed her mind. She understands that they two are very different in every single aspect, however, his thought hasn’t stopped running through her mind. This is another aspect that leaves Mahi’s feelings for him unexplored & maybe, she will get the chance, now that she is free from all obligations as Taimoor’s wife.

After weeks, I can say that I saw the potential in Khuda Aur Mohabbat 3 & felt that this still had a lot of margin of redeeming itself, let’s hope the drama-makers meet the expectations & keep it to the point in the remaining episodes. Also, I have always said that I do not like the flashbacks but this was one such episode where I did not mind the flashbacks with the OST echoing in the background. It goes to show that when the situation demands, flashbacks also end up being enjoyable. It was nice to see both Mahi & Farhad reminiscing about the moments they have shared. Props to Feroze Khan & Iqra Aziz for their brilliant performances. Feroze Khan was definitely the star of this episode because he made it very easy to understand the emotional turmoil Farhad was faced with. Please share your thoughts about this episode of Khuda Aur Mohabbat 3.