Tonight’s episode of Meray Pass Tum Ho had a few things going for it, the characterization for instant has been on point and some of the dialogues tonight were beautifully written. However, the slow pace of this drama coupled with the confusing timeline has to be the most off putting factor. There are also times when you feel that the heavy dialogues disrupt the flow of the story. As far as the storyline is concerned, it does seem like the writer will in the end have a strong message for all those women out there who are over impressed with wealth and status but will there be a message for men as well this time around?

I couldn’t help but think about Sila from Khasara while watching this episode. Although Ayeza Khan’s performance and the treatment she has given to Mehwish’s character is far better than the one we saw in Khasara but the character dynamics are the same. I am truly hoping that this time around, the cheating wife will not be the only one who gets punished in the end since Shahwar too is cheating on his wife and is an equal partner in all this. Unlike many other dramas, in this drama we see how a man is suffering at the hands of a woman who does not value him. The way Mehwish’s withdrawn attitude in this episode was covered was the highlight of this episode. Ayeza Khan’s phenomenal performance made Mehwish’s character easy to understand and relate to. Mehwish finally mentioned her mother and from the quote it was easy to understand where she gets her twisted mindset from! Danish’s character is easier to connect to now but there are times when his becharapan is exaggerated.

This episode covered how Danish no longer felt comfortable with Mehwish going to the office. Just like always, he talked to Mehwish about his feelings but this time around Mehwish gave a reply which reflected something entirely different which was going through her mind. Mehwish is now fully convinced that her husband is ‘jealous’ of her and Shahwar has in a really brief period of time managed to convince her that she deserves better. It is almost as if Mehwish was waiting for someone like Shahwar to come in her life. Few weeks back, Mehwish even defended her husband even if it was in a subtle way but now clearly Danish is just a ‘distraction’ and Shahwar is the main focus. Mehwish was always shown as a daring individual who did whatever she wanted but at the same time there were times when she seemed truly concerned about her husband. 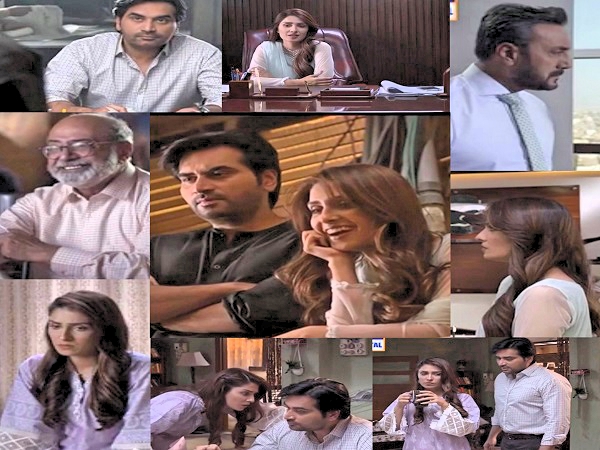 The routine in the house changed quickly with Danish making the breakfast and Mehwish being more involved in her ‘work’. The work being – getting ready and spending time with the boss! Danish’s dialogues in which he referred to Shahwar as his friend didn’t make much sense, if he was being sarcastic, it surely didn’t sound like it. Danish and Mehwish’s confrontation scenes were the best since they showed how helpless someone is when their partner decides to take the path Mehwish has chosen. Danish spelled out everything for Mehwish but she had an explanation for it all. Is Mehwish really that foolish? Mehwish is not foolish at all but she is so greedy that doing these ‘favors’ for her boss in return for such a big amount of money does not bother her at all. She also comes across as a wannabe, she wants to be modern and want to think like the elite class – so for her that means not following the ethical and moral boundaries set by the society she moves in.

The conversation Danish had with the school principal didn’t work for me at all. I understood why she was saying all this and how this was going to affect Danish but rarely do principals pass such personal remarks on the first meeting. Also, there are plenty of parents with kids out there who work therefore this conversation it seemed targeted all such people and was in bad taste. It would have been better if all these remarks came from someone else. Danish’s neighbor has suddenly disappeared as well. Surely someone like him would have plenty to say about the latest developments in Mehwish’s life. Muhammad Ahmed’s character is a good addition to this play – finally someone Danish can talk to.

Although overall the pace of this drama is slow but there are times when you feel like some of the developments are too rushed or that something is missing. The confusing timeline has been yet another problem. Previously, Danish’s khuda ki kasm scene did not coincide with him taking bribery and tonight, Danish told his colleague that he hadn’t brought food because he did not like the maid’s cooking although the maid had come to work only that morning. Danish and Mehwish’s first conversation regarding her work also made it look like she had been working for the longest time even though this was only her second day.

Danish knows now that he is gradually losing the woman he married and Mehwish on the other hand is too excited to take the ‘challenges’ of her new life. Shahwar continues to pursue and impress Mehwish, it is quite clear that he won’t stop until he has her in his life for good. Danish’s helplessness tonight made complete sense, he cannot force Mehwish to leave this job or refuse all the favors.

Overall, this episode of Meray Pass Tum Ho focused on showing how Mehwish made up her mind and there was no looking back now. The writer also did a great job of letting his viewers know why Danish was so helpless. Some of the scenes between Mehwish and Danish are getting repetitive but just like every other episode this one too had a few interesting dialogues. Ayeza Khan’s performance tonight was exceptional. This was one of those episodes in which Danish’s becharapan was a bit annoying but at the same time I felt for the poor man – after all he just wants a simple life!