So far, we came across Aman concern for Nazo and Nazo’s shyness and quietness showing every possible emotion that is impossible to narrate for an over talkative person..Khamoshi mai jo baat hai woh bolti zubaan mai kahan..

My prediction about Safeer and Irum’s accident proved to be right. Meenu ruined Nazo’s engagement dress due to sheer jealousy that her Nazo is going to be someone else’s property and not hers.

As soon as Nazo saw the dress,she told Irum and Irum decided to buy another one for her as it was the day of her engagement and she doesnot have any formal dress to wear plus Irum didnot want her dress to be worn by Nazo on her engagement day.All she wanted for Nazo is to look best and wear a new classy formal dress so she went to buy a new dress for her along with Safeer.

That very moment depicted itself that something bad is about to be happened soon. Their good bye, Nazo watching all pictures of Irum,Safeer,Meenu and her and everything else was forecasting about upcoming storm in their lives.And then the most heart rending part of drama came,when Safeer and Irum came across the worst accident and died on the spot. Poor Meenu and Sad Nazo were left all alone.

I would like to congratulate the entire direction team that they directed post-death scenes really well.The way Nazo said that “Mai aik baar phir yateem ho gaye” made me cry almost. Nazo was right,few years back,Meenu was the reason for Nazo to live,smile and stay happy and now Nazo will become the reason for Meenu’s happiness all around.

I am really hating Rudaba’s attitude towards Nazo.Her every dialogue pinches me.Soon,after Nazo came to Aman’s house to live alongwith Meenu,Rudaba’s attitude was untolerable.She was indifferent and was making every possible attempt to make her family members think same as what she thinks and plans for her life. But Aman’s family had faced one problem of Nazo’s property due to Rudaba and luckily they are intelligent enough to not listen any of Rudaba’s stupid ideas and comments that she give regarding Nazo.

Meenu was forced to go with Safeer’s khala and Nazo was feeling so helpless because she was so attached to her.They both are each other reason to live after Safeer and Irum’s death.

Height of cheapness came ,when Nazo came to thank Aman’s brother  for Meenu’s admission in new school and Rudaba said that you will get many chances of thanking everyone in this house in forthcoming days as you will get admission in medical college and medical college expenses are too much too handle.Her taunting and rude behavior hurt Nazo deep inside and after that she started feeling insecure. She was right at her place but Aman was unable to figure out that whats going in Nazo’s mind and why is she feeling so insecure while living in their house.

Aman and aman’s younger brother were not only sharing same blood but also they are really good friends.Unlike typical brothers,who keep on fighting with each other, they were completely different. Its because of him , Aman tried to make Nazo easy instead of haunting them every day.

Nazo and Aman’s scenes were too cute to handle. In that purely negative environment, their scenes were like cool breeze blowing. Ahsan khan’s expressions and Aiza’s quietness while staying all alone with Aman steal the show.

Rudaba is following the teachings of her mother and is not sparing Nazo from taunting everytime she comes across her.I really like Aman’s concern towards Meenu but his concern for Meenu will be taken somehow negatively by Meenu when she will get older in forthcoming episodes.

Preview of next episode is suggesting some more drama and fuss created by Rudaba and Aman’s family sorting the possible way out to get rid of fuss created by Rudaba.They will come to a conclusion that Aman and Nazo should be wed-locked so that Nazo will not hesitate to ask Aman for anything she will need and it will be Aman’s duty to fulfill all her needs and desires afterwards.

Do give your valuable feedback.
Stay Blessed,
Rabia Basharat. 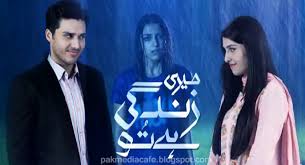