Ohkay so, this episode marked the end of Mohabbat.pk. If there’s one term that can describe this drama, it would be ‘short & sweet’. In my opinion it ended a bit too quickly, like I could totally see another 3 episodes of this drama because of the comedy it provided, like after ages we were getting to see such type of comedy which had a meaning & a proper relation to the daily lives of regular people, but never-mind, all good things must come to an end, however I thank the entire team of Mohabbat.pk for bringing us a comedy that we haven’t witnessed in a long long time!

So, finally everyone got to know that Dada Jee made the most of the missing clause from the Nikkah nama to make sure no one can ever tell them to move out from this place. At first Nazim tried to make things right but when he felt that he was being cheated upon, he decided that he wasn’t going to get bothered about Zoha anymore & he would tell Kazim to divorce her. The way Kazim was being brainfed about the American dream by his parents was hilarious, Nazim & his wife Razia actually believed that if Kazim will go to America, he will solve all of their issues but then they had no idea that Twinkle had no intention of taking Kazim with him because she herself couldn’t go back to America. 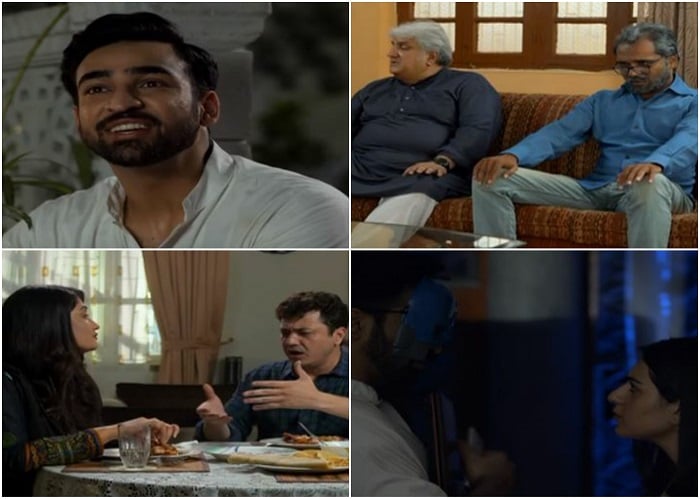 Well, Munni & Sikandar met a very cute ending, after finding out that Qabza Group wasn’t going anywhere, Munni decided to go back to her in laws with a plan that she would win Sikandar’s parents over to secure their place in their home. Sikandar who obviously was too smitten by his wife had to follow her lead because he wasn’t someone who believed in thinking things through, so just like how he followed Munni to her parent’s home, he decided to move back in with his own parents as well on Munni’s suggestion. I think it was a sweet message that was conveyed that one could always fix things by resorting to the idea of togetherness & love, that is why Munni decided that she should give due respect to Sikandar’s parents, even though she had an ulterior motive but still, her plan wasn’t going to hurt her or anybody!

So, Kazim decided to get the video footage from Zoha’s laptop/mobile so that he could proceed with the divorce but even before he could do that, he himself fell in love with her because of the way Zoha treated him. Again, it was suggested that just because Zoha chose the way that Kazim wasn’t expecting, she floored him. Kazim for the first time actually felt attracted towards Zoha because he could see that she was genuinely a nice person, which again was an act that Zoha put to get to her goal, lol. Like Dada Jee always said ‘ye larki bohat aggay jayegi’, Zoha actually proved it by throwing such a sweet curve-ball at Kazim that even he couldn’t read it properly. Well, the way Kazim’s mannerisms & body language changed after that sweet encounter was amusing, it was funny how he started maintaining a distance from Twinkle & kept on making excuses so that he didn’t have to spend time with her because now he was purely focused on Zoha. 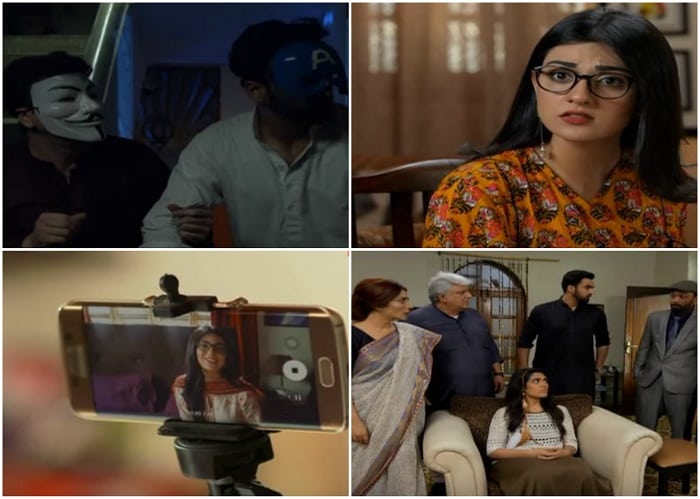 Nazim & Razia would’ve convinced a soft-hearted guy like Kazim but the entry of Interpol Bhai changed everything. Twinkle was basically a fugitive & with her arrest, Kazim’s coast was clear & he could easily resume his relationship with Zoha. A very sweet ending which came after a lot of twists & turns.

The best part of Mohabbat.pk was its characters, those unpredictable situations & then the dialogues which had so much of political wit that one couldn’t stop laughing while watching it. I loved how all the current political references were added in the dialogues to make the entire situation seem realistic & relatable because it actually worked. The note at which the drama ended was another intelligent & witty spin of the writer on the reality where Zoha was trying to paint a rosy picture of her life in front of her subscribers but then her spat with Kazim showed that her life wasn’t a fairy tale, rather it was reality driven where husband & wife have their fair shares of spats & bickering as well. I think the message that the writer conveyed through that scene was quite interesting because he showed that not everything that makes to the social media is meant to be trusted because it is an edited version of the reality & not everyone’s life is ‘that’ perfect because it is very easy to tweak with things to make them seem a certain way.

Overall, this drama was a very well-thought out effort & was brought to us in a perfect manner. I wish this entire team gets together once again to bring us another short drama, may be before Eid ul Azha or so because despite being the 1st mini drama serial, it was perfect in every respect. The acting, the writing, the direction, the dialogues, everything just hit the right spot. All the actors, Saife Hassan, Manzoor Qureshi, Sara Khan, Hassan Noman, Beenish Raja, Agha Mustafa Hassan, Anum Khalid, Farah Shah & the actors playing the roles of Ehtasham & Twinkle did a great job. Qabza Group definitely stood out a bit more because their characters were twisted & quirky so the way Sara Khan, Saife Hassan & Manzoor Qureshi portrayed such complexed characters with such difficult dialogues so effortlessly really conveyed the comedy which the creators of the project were after. It was amazing how each & every single character contributed towards the story & had one thing or the other to offer. The writer Mustafa Afridi deserves a special mention for such perfect dialogues because that’s where the comedy lies in any comedy drama & he made sure to add that in abundance. The director Ehtashamuddin surely directed this drama to perfection. I am actually sad that it is over but I thoroughly enjoyed it. Please share your thoughts about this small rollercoaster ride named Mohabbat.pk.