It was awfully difficult sitting through tonight’s episode which once again was one-dimensional because the focus of the story yet again was entirely on who should get married to whom! So far the story lacks depth and the characters have nothing grand to offer, in fact this drama has plenty of annoying characters. This episode did not have a single impactful or even entertaining scene to its credit. Watching these characters which are so plain, talking about love and commitment like they are experts in the field definitely makes it even more difficult to connect to their characters. Maheen has not yet given an answer to Gulrez’s proposal yet Ami Begum thinks it is a good time to force Waqar into getting married to someone he clearly does not want to get married to. I definitely expected better from Ami Begum’s character. What she did today was just plain shocking and not in line with her character at all. She has been shown as a really cool nani/dadi who has given Maheen plenty of time to think about Gulrez’s proposal but wants Waqar to marry Jia because he is friends with her. She is also very sure that Waqar is in love with Jia!! This had to be the most forced development in tonight’s episode.

The conversations in Gulrez’s house are even more monotonous and repetitive than the ones in Maheen’s house. Gulrez’s state of mind, his sister’s fears and his brother in law’s role in the entire scenario has been shown clearly in the past few episodes, now this track needs to move forward. No one in Maheen’s house except for her sister has talked about the proposal again. It is strange that Ami Begum is pursuing Waqar’s relationship with Jia more passionately than Gulrez’s proposal for Maheen. Everyone invested more time in talking about why Waqar left the match than discussing what to say to Gulrez’s sister or how to make Maheen come up with a decision. I hate to see talented actors like Saman Ansari and Malik Raza being wasted playing these useless characters which are like props more than anything else. 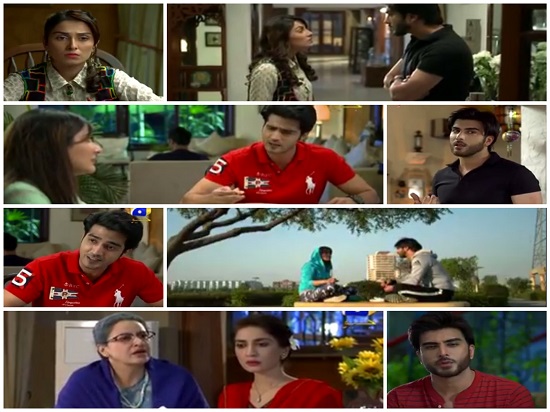 The lyrics of the OST of Mohabbat Tumse Nafrat Hai are far more deep and meaningful than this drama as a whole. I hate to say this but this episode reminded me of Mann Mayal, the only difference is that back then I had more patience and stamina!! This episode proved that Mohabbat Tumse Nafrat Hai is not likely to take off because it does not have enough substance. I definitely expected better from a writer like Khalil-ur-Rehman Qamar and right now I am very tempted to tune into Zakham because even though it is simple but it is much more entertaining than this play! It is impossible to connect to any of the characters, Jia and Ami begum are turning out to be two very unreasonable people! I was shocked when Jia sent Ami begum her father’s phone number since she hates him so much. This episode once again had some of the most dull conversations and the characters are losing their charm with every passing episode. Everything about this drama is too staged, from the scenarios to the way they have been enacted on screen. All those annoying commercials promoting shows which are going to be part of Geo’s Ramazan transmission made the whole experience of watching this drama live on television even more torturous! I am beyond disappointed with Mohabbat Tumse Nafrat Hai and have no reason to look forward to the next episode!

How many of you watched tonight’s episode? Please share your thoughts about it.