Mohabbat Tumse Nafrat Hei Episode 27 Review – The Secret Is Out!

“Ab aap bahir aa jao papa. Aap ke sur ka sara bojh utur gaya hei. Meinay apne armano ka khoon baich ke adayegi ki hei papa…..aap moj manaye, ji bhur ke gunnah kijiye, kafara dene aur qarz chukane ka waqt aye ga tu bachay chukaye gay na.” These dialogues resonated with me more than any other in this particular episode because they reflected Maheen’s frame of mind and it is true that very often the children have to pay for their parents’ mistakes. In this case however the child in question did not pay for her father’s wrongdoings because it was fate but because someone decided to take revenge. Jia’s confession and the manner in which Waqar broke the news to everyone else was definitely done really well since everyone listened to what she said first hand. The way she confessed however was rather odd because she wasn’t apologetic for her actions. For the most part also, the director failed to do justice to the script in tonight’s episode. All the scenes were written in such a manner that they added something new to the story but most of the scenes were stretched a little too much. Two more fast-paced episodes which gave the drama a decent ending would have been better than adding three episodes which will have scenes that are a strain on the nerves.

The fact that Waqar wasn’t forgiven instantly by everyone even after finding out that Jia was responsible for creating this huge misunderstanding has to be the best part of the recent developments. Most dramas would end at this point and Waqar would have been forgiven; it is good to see that everyone is not willing to give him the benefit of doubt since what he did was disastrous. Maheen’s attitude towards Waqar however has been the most surprising development. I find it impossible to believe that she has forgiven Waqar. The sudden change in Maheen does suggest however that she has either found closure or she is planning something. Right now, it is impossible to tell what is going to happen next. The credit for this also goes to Ayeza Khan who isn’t giving anything away and is letting the viewers wonder what is going on in Maheen’s mind. 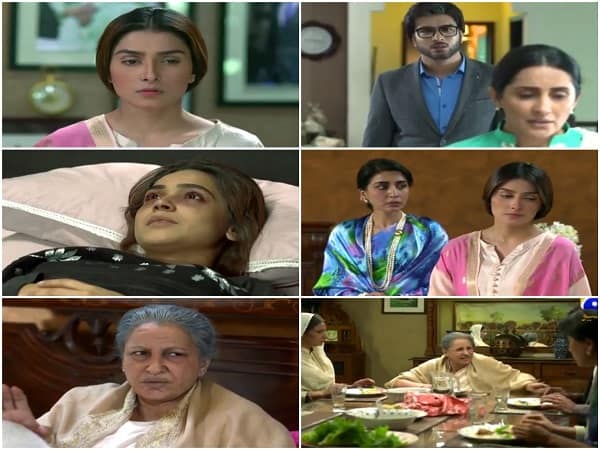 Ami begum’s dialogues in tonight’s episode were funny. There was a time when I found her extreme reactions annoying but now I find them hilarious! Her love-hate relationship with Waqar has grown on me. Apparently everyone knew about Aurangzeb’s history with Tehmina already therefore this particular revelation did not come as a surprise to anyone. The only shocking part was that Jia was Tehmina’s daughter.

The flawed make-up, the ever-present loud music, direction which very often tests your patience and faulty camerawork are those weaknesses of Mohabbat Tumse Nafrat Hei which can easily put any viewers off. The story however is very well put together and at this point the story is at such a stage that these flaws in the drama won’t stop the viewers from tuning into it for the next two weeks as well. Having said that, this drama could have been a huge success had it been given the right treatment. Two more episode to go and we will finally see an ending to MTSNH which would hopefully be worth the wait. The story was going forward at a steady pace for the past few weeks but this episode was slow paced. The disclaimer in tonight’s episode was also a big distraction since it was right in the middle of the screen.