This episode had quite a few important developments to its credit and just like every other episode of Mujhe Jeenay Du this recent installment too highlighted the injustices which are so readily accepted as the right course of action by so many people. I can’t help but wonder how different this whole situation would have been if everyone directly related to Saira did not look after their own interests but invested their energies into building a proper future for this little girl. Saira does not want this life, when she came home in the middle of the night in her own innocent way, she tried to convey that she did not want to go back to her “abusive husband” but the reply she got from her brother in particular left her with no choice. Saira’s situations and everything she is going through is heart breaking. The child star playing the role definitely fits the bill and deserves an award for her performance. It is heart-wrenching watching such a young child being so conscious about her “duties” and being pressurized into leaving her childhood behind.

Tonight’s episode showed how gradually Saira is being forced to transform into a “woman” because even though she isn’t even a teenager yet but since she is married everyone expects her to forget that she is a child. Saira bid farewell to her best friend and her school in this episode. Shabo and Saira’s relationship is endearing and I am certain this love won’t die as they grow older even though Shabo has left the village. Shaheena took over Naseeb’s household chores and Naseeb’s reaction clearly showed that he missed a woman’s presence in his house. Things would have been so different had Naseeb been married to a woman his age. Saira however was a convenient option for everyone around. Naseeb’s sudden likeness for Shaheena suggested that there might be more to their track then Shaheena helping him out with Tipu and the household chores. Mehreen Raheal’s brilliant portrayal is beyond impressive. Her get-up, body language and dialogue delivery is right on point. Goher Rasheed is also bringing out the different shades in his character impressively on screen. The director deserves tons of credit for casting many of these actors in roles very different from the ones they are usually seen playing and for ensuring that all of them give their best performances. 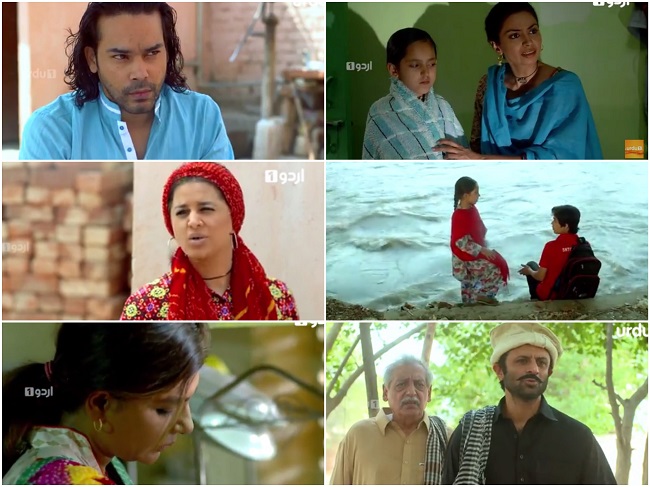 Yasmin’s character is one of the best characters in this drama. Her character alone says so much about so many different aspects of a woman’s life. Firstly, her dedication shows that sometimes even one person can make a huge difference. Secondly, even though Yasmin is so “empowered” in more ways than one yet at the same time her strength does not give her immunity from getting hurt or being betrayed just like many other women around her. Yasmin’s man does not value her and in this episode the viewers also found out that he went behind her back and got married to another woman. This revelation did not come as a surprise since his attitude towards Yasmin said a great deal about his mindset but the fact that he had the guts to introduce Shado with his other family came as a surprise. Nadia Jamil is a gifted actress who makes the viewers connect to her characters instantly. It is definitely great watching her play this role. Even though Yasmin is not being shown as a victim but I do feel for her since she too is fighting a constant battle and even with all her intelligence and enthusiasm she is vulnerable. I am waiting to find out how she will react to the news of her husband’s second marriage.

Saira’s conversations with Kheri and Shabo in particular were the highlight of this episode. Saira’s character has been etched-out brilliantly and translated on screen faultlessly. So far, this drama has a superb script, some amazing performances and it has been directed in a terrific manner too. Really looking forward to the next episode!