A beginning of new year also means a beginning of new chapter in someone’s life. It stood true for some of the well known and loved Pakistani celebrities where the year 2019 brought marriage, festivity, happiness and togetherness in their lives. Celebrity wedding is always a widely followed affair where all the fans, well-wishers and supporters of the celebrities look forward to the weddings of their favorite stars. They also await the pictures and follow every function and wedding festivity closely. Celebrity weddings are always appreciated and well-received by fans and year 2019 was no different where Pakistani nation got to see a lot of beautiful couples tying the knot and beginning the new chapters of their lives merrily.

Let’s take a look at all the Pakistani Celebrity Weddings that took place in Year 2019:

Hamza Ali Abbasi and Naimal Khawar’s wedding was the most speculated affair because the news of their marriage came as a pleasant surprise to the fans. It won’t be wrong to say that this was the wedding of the year. They got married in a simple intimate ceremony which was attended by very close family and friends. They had their Nikkah in the afternoon at Monal, Islamabad. They had their Valima in Marriot Islamabad. The couple tied the knot on August 25, 2019 and had wedding reception on August 27, 2019.

Famous Pakistani model and actress Imaan Aly tied the knot with Babar Bhatti. Babar Bhatti happens to be the nephew of Major Aziz Bhatti Shaheed. Imaan Aly is the daughter of veteran actor Late Abid Ali. The couple got married in Lahore on February 21, 2019. They had traditional mehandi function and on that day they had their Nikkah too. They later had a walima reception. This was a star studded event which was attended by a lot of celebrities. Imaan Aly had her makeup done by her best friends and famous makeup artists Ather Shehzad. 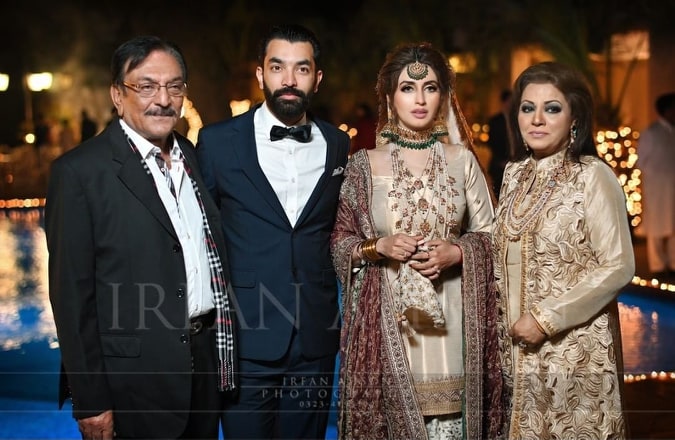 The news of Sanam Chauhdry’s marriage and her quitting showbiz was making rounds on the social media a few months ago but Sanam Chauhdry refuted the rumors herself. She now tied the knot with her long-term fiance singer Somee Chauhan on November 27, 2019 in a close-knit ceremony. The couple had their Nikkah ceremony.

The news of Pakistani cricketer Hassan Ali’s marriage to an Indian citizen Samiya Arzoo came as a surprise. The news started circulating but Hassan Ali stated that the proposal was still in the initial stages and nothing was finalized but a few days later, he actually got married to his lady love in Dubai. This wedding was a grand affair where they got married in Atlantis Dubai on August 20, 2019. Their wedding was attended by close friends and famous cricketers.

Immediately after Hassan Ali, cricketer Imad Wasim also tied the knot. He got married to British Pakistani Sannia Ashfaq. The couple had their Nikkah ceremony on August 24, 2019 at Faisal Masjid, Islamabad. The Nikkah was a private affair which was attended by immediate family. The couple later had a grand reception in Islamabad on August 26, 2019.

Actor and writer Mira Sethi, daughter of Najam Sethi and sister of singer Ali Sethi got married to the love of her life Bilal Siddiqui. The couple held a small intimate ceremony to celebrate their union with their friends in San Francisco, USA a couple of weeks before coming to Pakistan. They later had a grand reception in Lahore on November 18, 2019 which was attended by all of their family and friends.

Saniya Shamshad’s wedding news also took everyone by surprise because no details were shared prior to the event. All of a sudden the pictures started circulating and the wedding garnered a lot of attention. Saniya Shamshad got married to Hidayat Syed on July 26, 2019. The groom is settled in Australia and Saniya Shamshad moved to Australia with him after their wedding. This was a traditional wedding which consisted of all the functions such as mayoun, mehndi, rukhsati and walima.

Son of famous TV actress Saba Faisal, Salman Faisal got married to his lady love Neha Malik in February 2019. Their wedding was held in Lahore and it was a grand affair which was attended by big names of the industry. Salman and Neha’s wedding was spread over a few days and they had a total of 9 functions consisting of dholkis and mayons, mehandi, qawwali, Nikkah and then Baraat and Walima.

Famous sports journalist Zainab Abbas got married to Hamza Kardar on November 30, 2019. Her wedding was held in Lahore and it was a grand affair which was attended by a lot of famous sports personalities as well as celebrities. Zainab Abbas had a shendi function followed by Valima. She made a fun entry to the wedding venue by holding a cricket bat, the sports which she is known for.

Famous fashion designer Ali Xeeshan got married to journalist Myrah Khan in Islamabad on November 11, 2019. The couple had a beautiful day function where they had their Nikkah. Their wedding venue was a vision and the official photography of this beautiful wedding was done by Irfan Ahson and Maha’s Photography.

Naheed Shabbir and Nomi Khan tied the knot in Karachi in August, 2019. This happens to be the second marriage of both Naheed and Nomi. This wedding attracted a lot of negative attention but both Naheed and Nomi seemed absolutely happy and in love with each other. This wedding was attended by a lot of celebrities who became a part of the event to bless the couple with their well wishes.

Famous TV Anchor and host Hifza Chaudhary got married to model Anis Altaf this year. The couple had their Nikkah ceremony on March 8, 2019. However, they had their wedding festivities in the beginning of September, 2019. Their wedding function was attended by a lot of media personnel associated with Geo TV.

Celebrity Makeup Artist Babar Zaheer got married to Rida on August 22, 2019. Their wedding was held in Karachi and it was one such wedding which was attended by all the big names of Pakistani showbiz industry. Babar Zaheer has been a makeup artist to all the famous celebrities therefore they all being close friends to him came to celebrate his union and big day. This wedding was definitely one of those weddings which garnered a lot of attention on social media.

Mehwish Hayat’s brother Danish Hayat got married to model Faiza Ashfaq on February 27, 2019. The couple had a Nikkah prior to the shendi function which they conducted to cut their wedding short to keep it sweet. The outfits of the couple were designed by famous Indian fashion designer Sabyasachi.

TV anchor and journalist Madiha Naqvi got married to MQM leader Faisal Sabzwari in a small ceremony in Karachi. The couple tied the knot on July 21, 2019. Although this was a close-knit affair, it was still attended by some of the well-known celebrities.

Film Producer Imran Raza Kazmi got married to Saadia in Islamabad in November. The couple had their Nikkah and then the wedding began with an official event of Shendi which was attended by Imran’s friends and famous celebrities such as Hareem Farooq, Ali Rehman and Osman Khalid Butt. They all are close friends therefore they were at the forefront through the wedding. It was a star studded event and a lot of big celebrities attended this wedding.

Shan Baig is an actor and model who has joined the industry a few years ago. He got married to the love of his life Michelle Saifee Rajput. His wife does not belong to the industry. Their wedding was held in Karachi in January, 2019. They had a grand wedding with all the conventional functions such as Nikkah, Mehandi, Rukhsati and Walima. Shan Baig’s wedding was a star-studded event, which was attended by a lot of celebrities.

Canadian Pakistani Youtubers Sham Idress and Seher got married and had their Nikkah in November, 2018. However they had their official wedding reception on July 22, 2019. The couple had a mehndi function followed by a reception where Shaam officially brought Seher to his home and they began their lives as a married couple.

This concludes the list of all the Pakistani Celebrity Weddings that took place in 2019. Which of these weddings did you follow closely on social media. Share your thoughts.