Mira Sethi is not just an actress but she is also a writer who is really good at writing sarcastic comedy. Currently, she is working on writing her book which will consist of 7 short stories. Mira Sethi family consists of many talented individuals who are well-known in Pakistan. Mira Sethi did her schooling from UK, she went to college in the US but when it was time to settle down, she decided there was no place like home. She started working as an editor at a newspaper in New York. She was working at the Wall Street Journal for 3 years but she wanted to be an actress. For her professional life Mira Sethi came back to Pakistan because according to her she is a total desi at heart. Mira Sethi family has been the topic of discussion especially after her wedding pictures went viral. 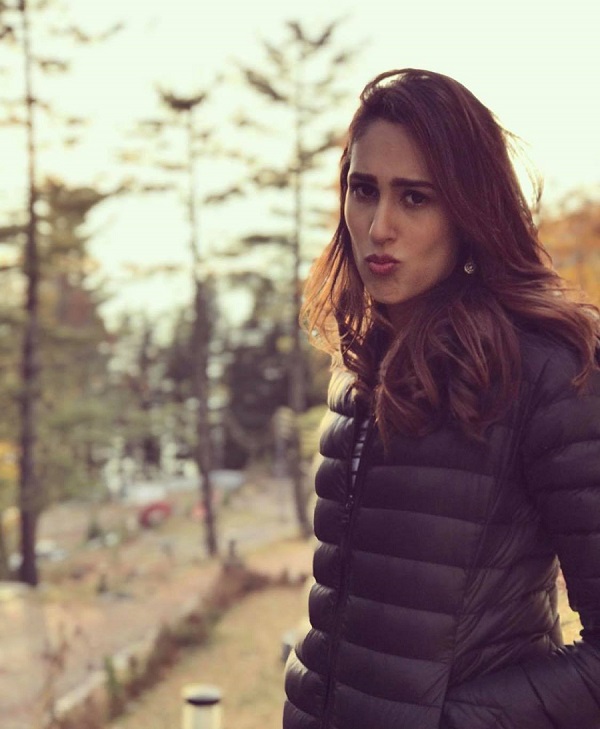 Mira Sethi shares a strong bond with all her family members. Mira Sethi is also known for her intelligent stance on different issues. She is an actress who refused to be stereotyped and very often talked about the shortcomings in the entertainment sector. Other than that, Mira Sethi has also acted in short videos penned by herself which she posts on social media and YouTube. 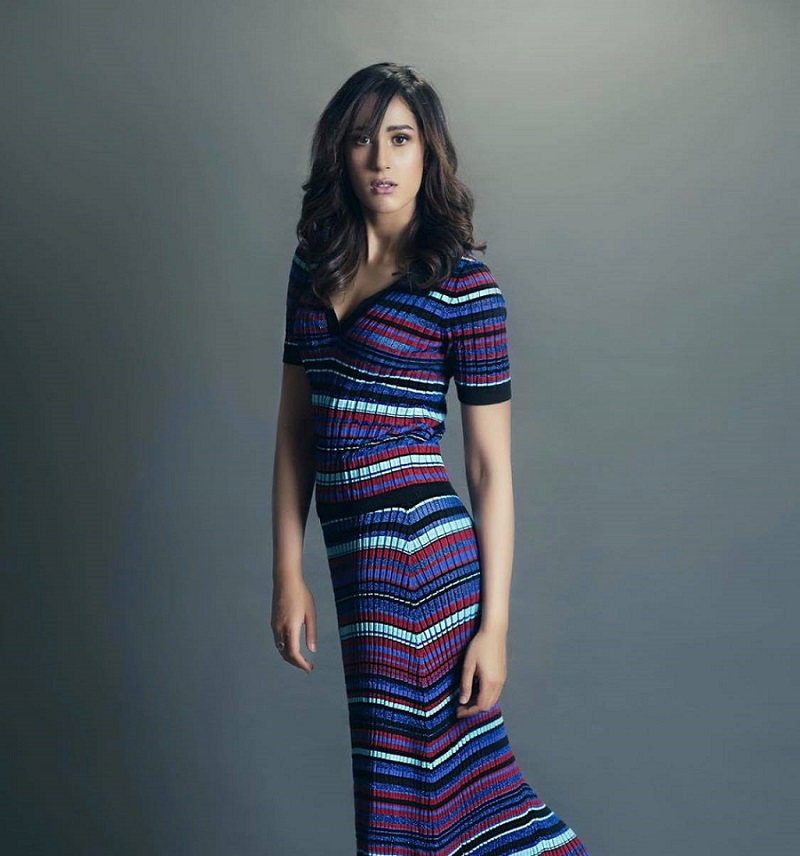 Mira Sethi has one brother who is older than her and she shares a close relationship with her family. Here is everything you need to know about Mira Sethi’s family. 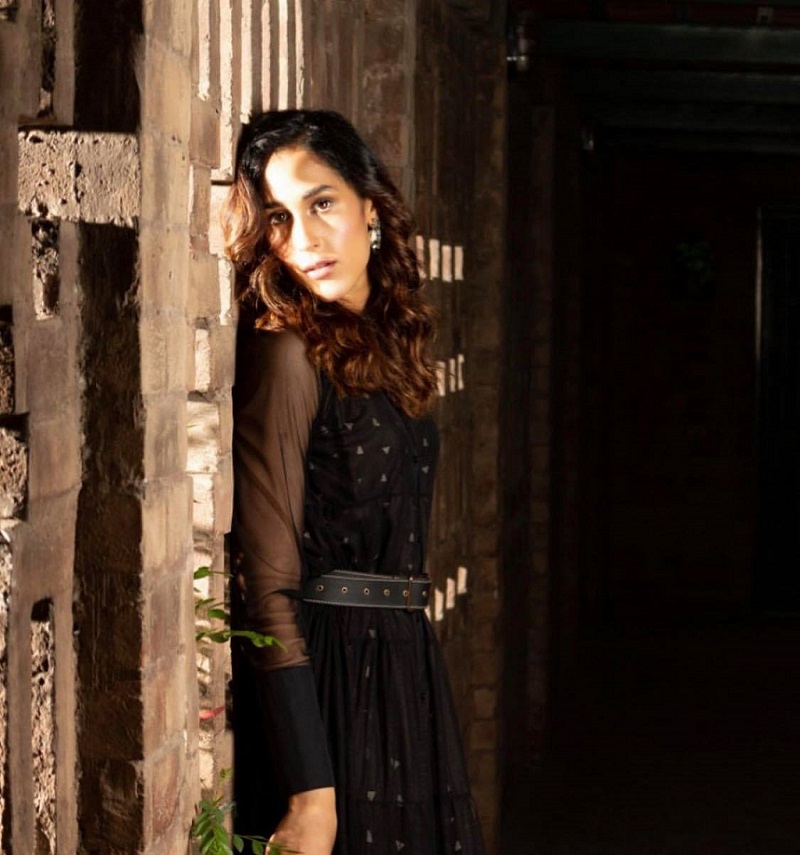 Mira Sethi’s father’s name is Najam Sethi, who is a well-known personality in Pakistan. Najam Sethi is the founder of The Friday Times and Vanguard Books. He was also the chairman of Pakistan Cricket Board from August 2017 to August 2018. During the 2013 elections, Najam Sethi also served as the caretaker chief minister of Punjab. He also got arrested for his political activism in 1975 and 1999. 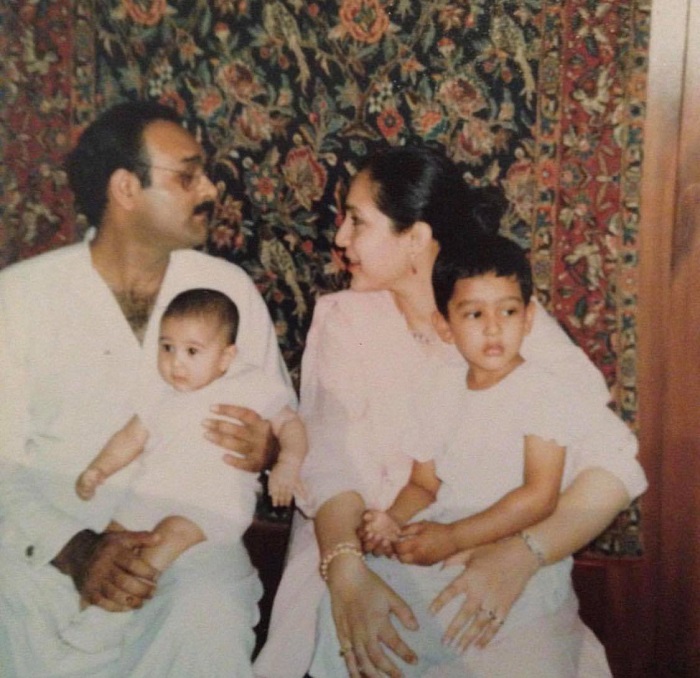 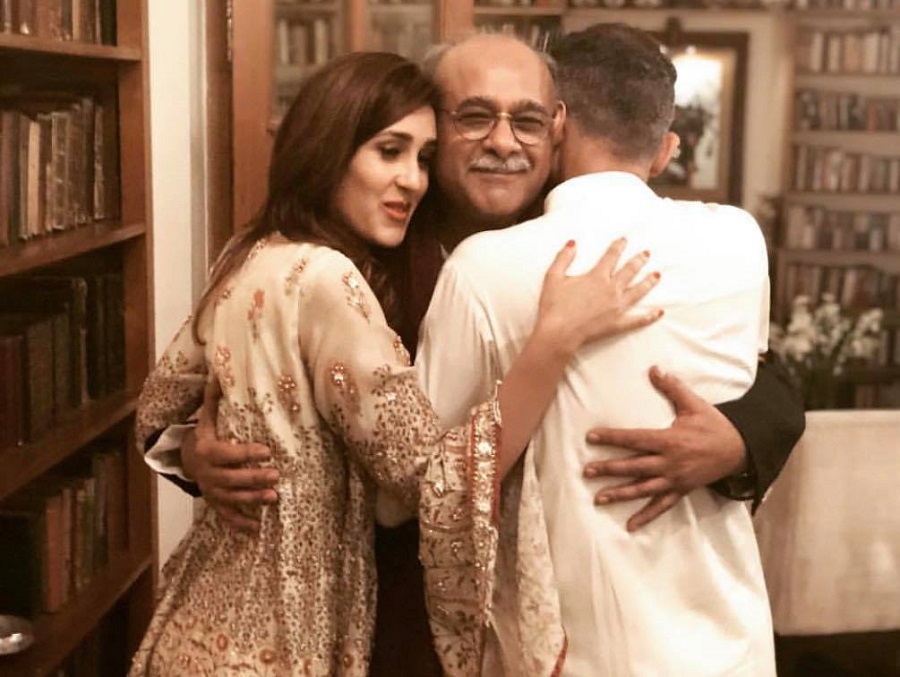 Najam Sethi has been in the midst of controversies more than once. His publishing house also published the book ‘My Feudal Lord’ which was written by Tehmina Durrani which had details about the hardships she faced when she was married to Mustafa Khar. Right now, Najam Sethi is a well-known political analyst who is very often seen making predictions on different talk shows about the future politics. Najam Sethi also has his own YouTube channel with many popular shows. Najam Sethi was awarded the Hilal-e-Imtiaz award in 2011. Apart from this he has won many other international awards for fighting for the freedom of the press. 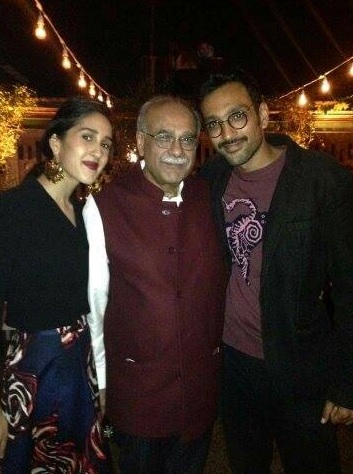 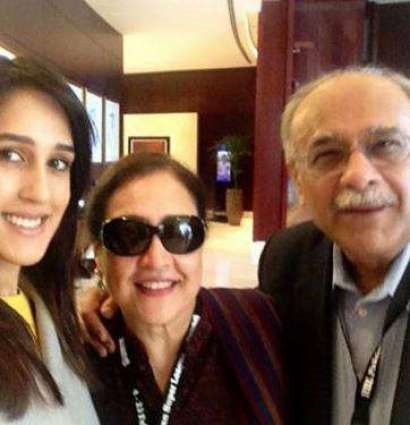 Mira Sethi shares a close bond with her father. In an interview she shared that her father always gave her the liberty to live her life to the fullest. Her parents decided to put her in boarding when she was not performing well in college and that experience helped her grow. She also shared that her father does not watch her dramas because he just does not like watching dramas. Every time Mira has made her father watch her plays, he has praised her.

Mira Sethi’s mother’s name full name is Syeda Maimanat Mohsin but she is known as Jugnu Mohsin. Mira Sethi’s mother is a politician and a famous journalist. Mira Sethi’s mother got her law degree from the University of Cambridge. Later on, she worked as a journalist in The Friday Times. When her husband was arrested in 1999, Jugnu Mohsin launched an international campaign for his release. She contested in the 2018 elections and won the Elections from PP 184 Constituency of Okara District. Jugnu Mohsin is known for her strong intellectual personality and also for being a true Pakistani at heart. Her satirical pieces in the newspapers are especially loved by the readers. 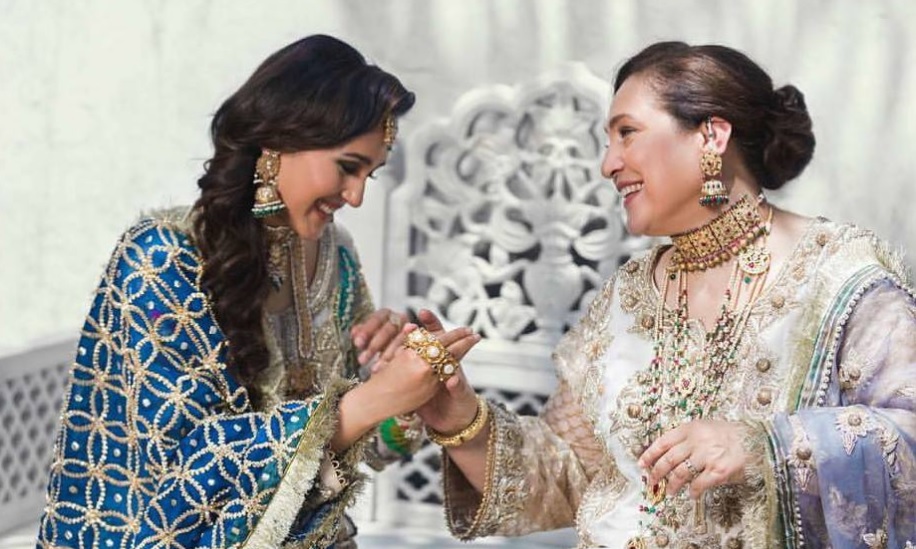 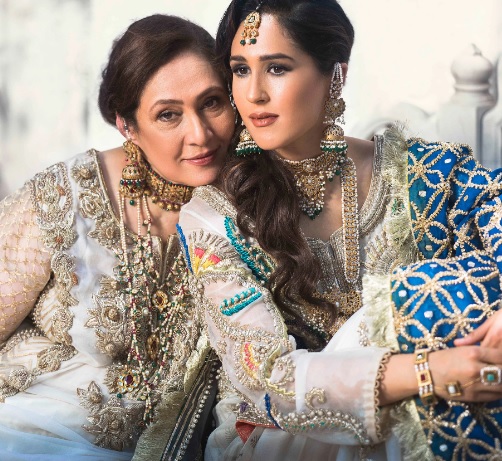 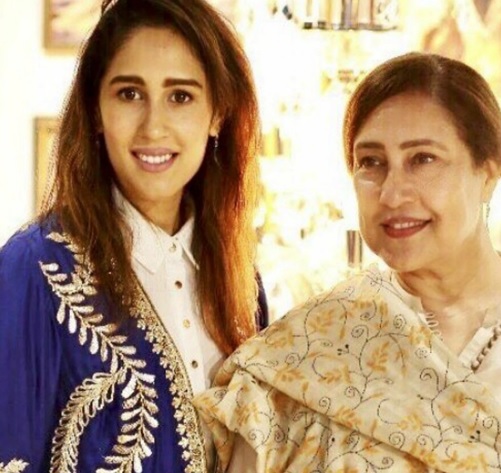 Mira Sethi shared in an interview that her mother is her biggest critic. She said that unlike her father, her mother tells her when she does not like her work. Mira Sethi’s mother thinks that she is better at writing satire and acting in comic roles than doing serious acting. In an interview, Mira Sethi also shared that even her mother is really good at mimicking therefore in a way acting is in built in her. 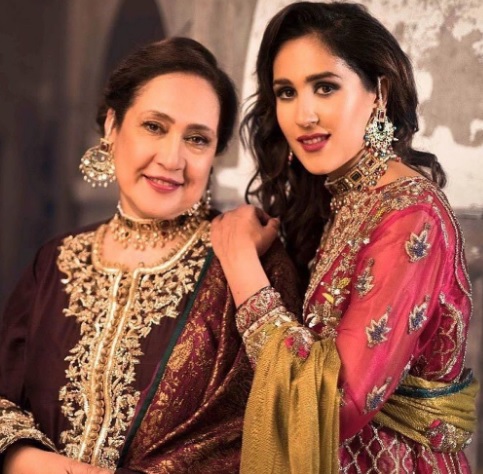 Mira Sethi’s older brother Ali Sethi is a famous singer who also happens to be another educated and talented member of this family. Ali Sethi is also a writer, who has written a novel titled ‘The Wish Maker’. Ali Sethi went to school at Aitchison College, Lahore and later on he did his specialization from Harvard University. Just like his sister, even though he was educated enough to get into any field, Ali Sethi always had a knack for writing and creativity. Ali Sethi performed a ghazal for the first time “Aaj Jaane Ki Zidd Naa Karo” on stage at Harvard. Ali Sethi took proper training from the best ustads of classical music for more than 5 years. Ali Sethi always wanted to be a singer which is why he started polishing his acting skills while he was at college. 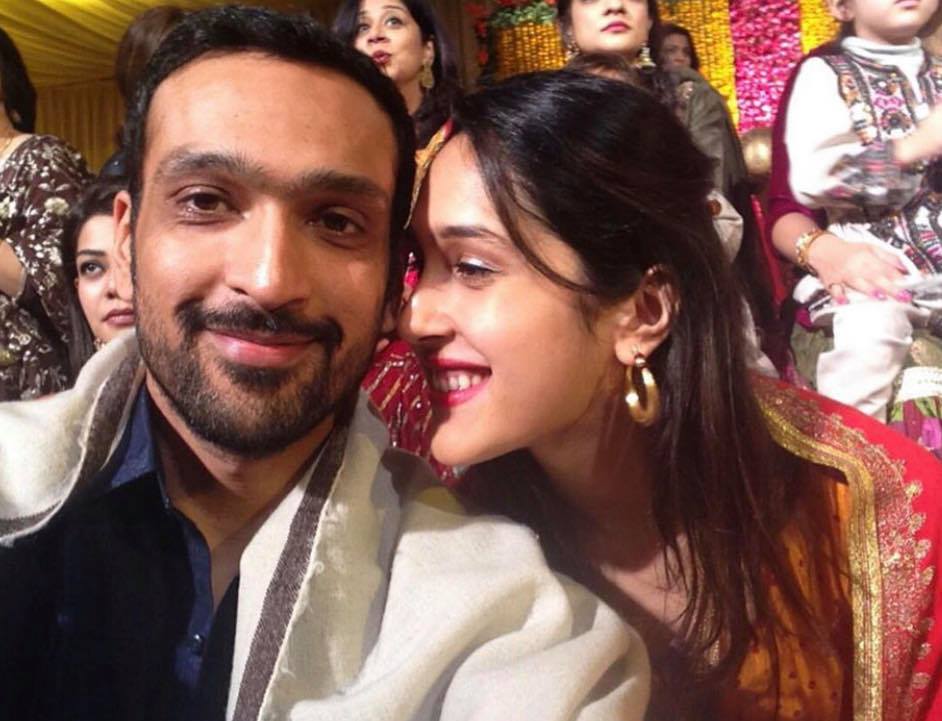 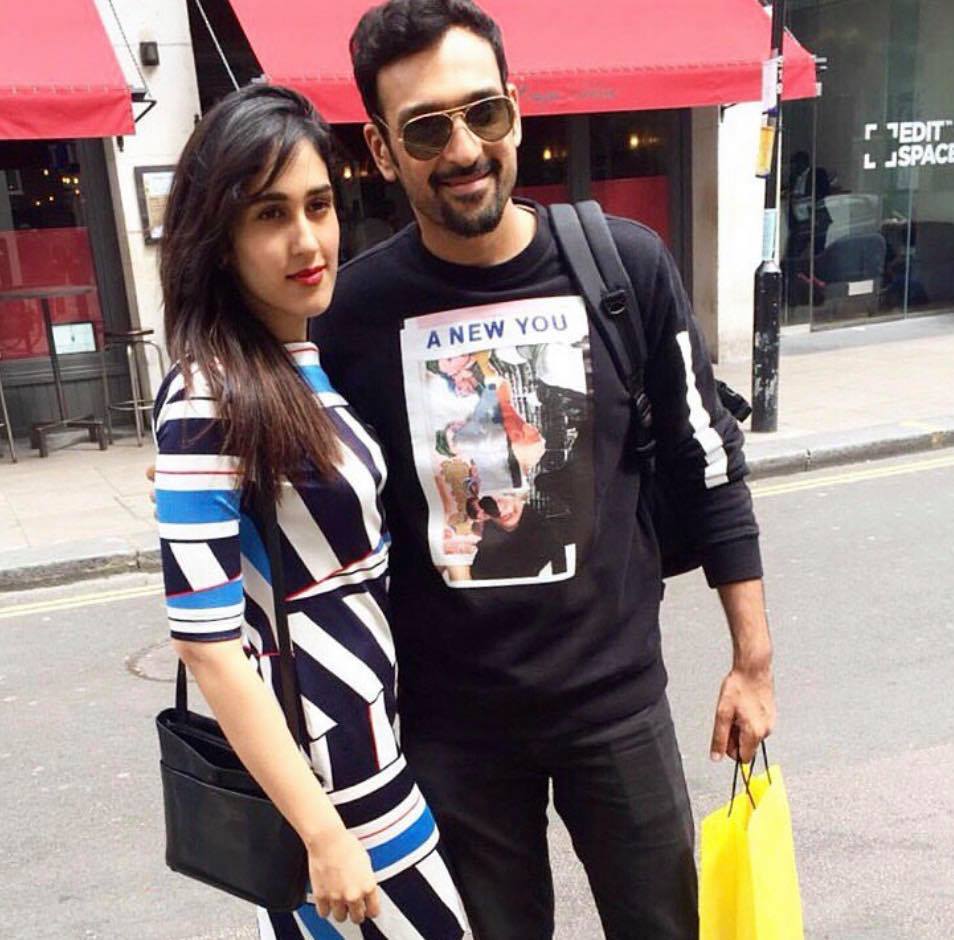 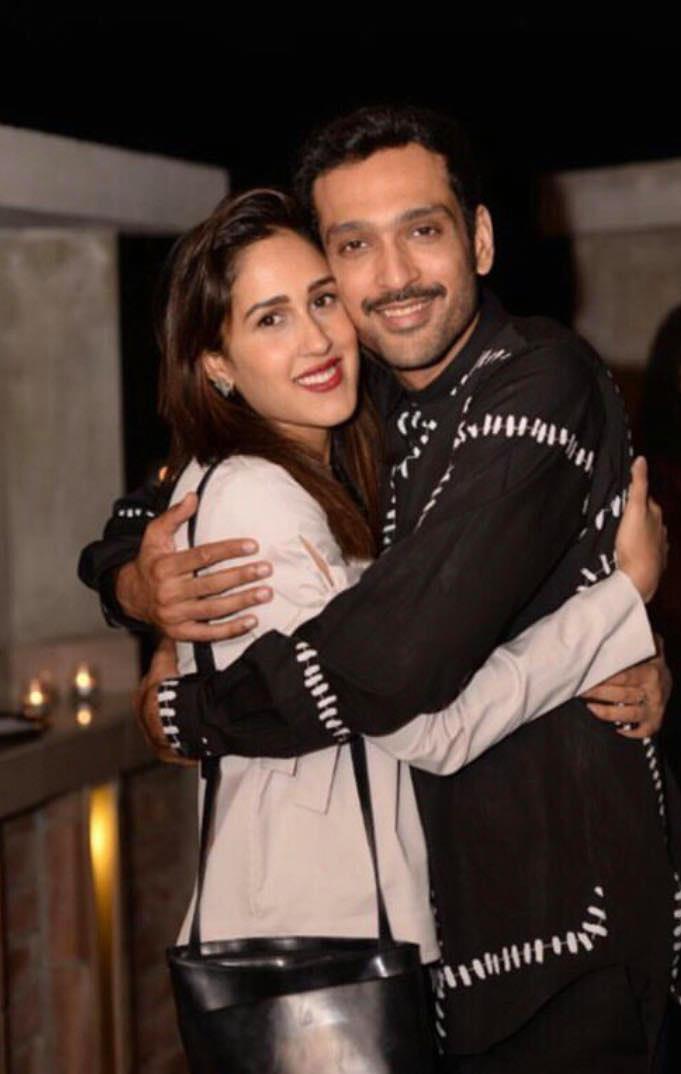 Mira Sethi’s close bond with her brother is evident from the pictures she posts on social media. These two have been close right from the time they were kids. Mira Sethi shared in an interview that her brother was always an outstanding student unlike her because there was a time when she struggled with her studies. Ali Sethi is now considered one of the best classic singers in Pakistan and he has had concerts all around the globe. 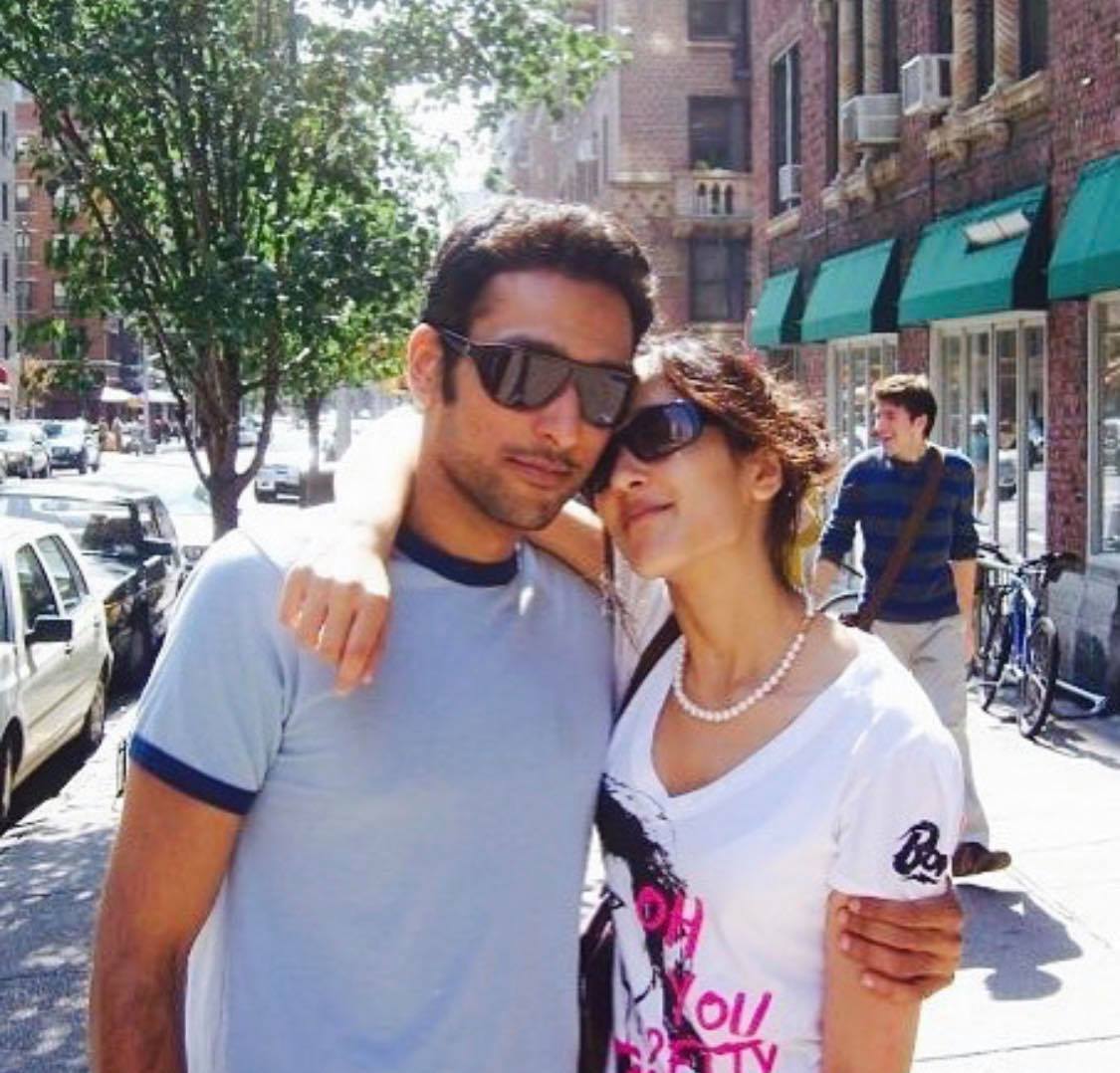 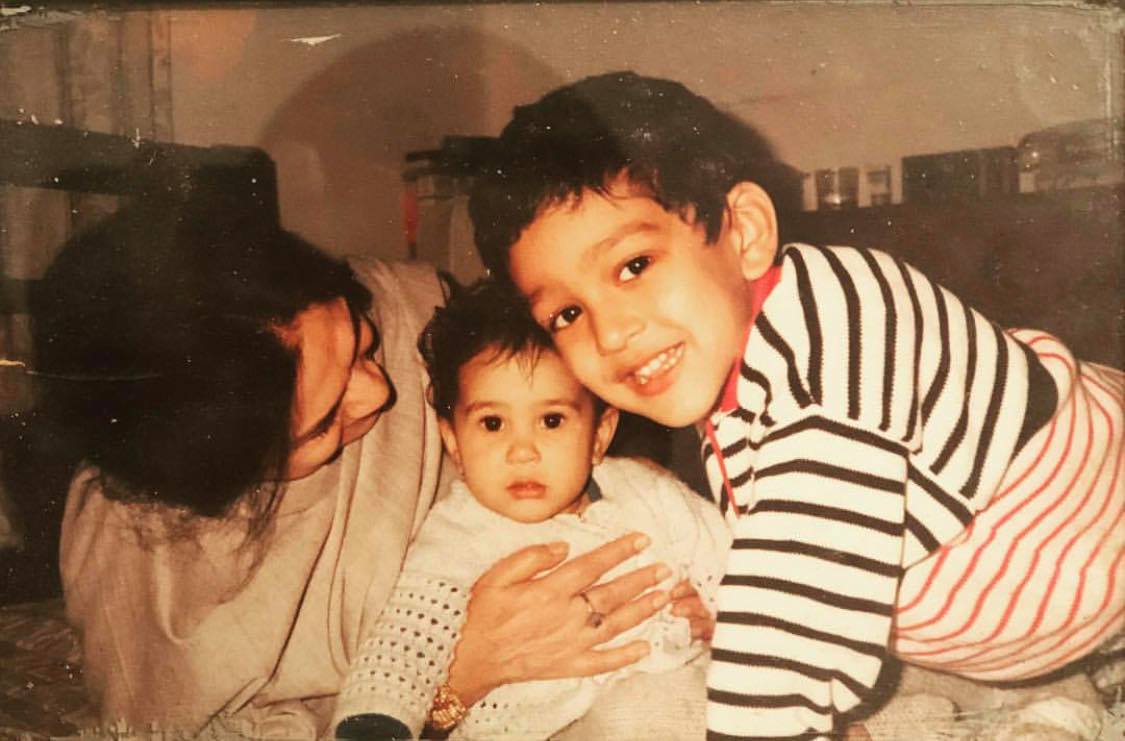 Mira Sethi recently got married to her childhood friend Bilal M. Siddiqi. Mira Sethi announced the engagement in November last year and this November the two were happily married. Mira Sethi’s husband did his Phd from Oxford in 2008. Mira Sethi had known Bilal practically all her life but it wasn’t until 2017 that they started getting close to each other in a way they had never been before. Mira Sethi shared her entire love story in an Instagram post but her husband keeps his accounts and personal details private. 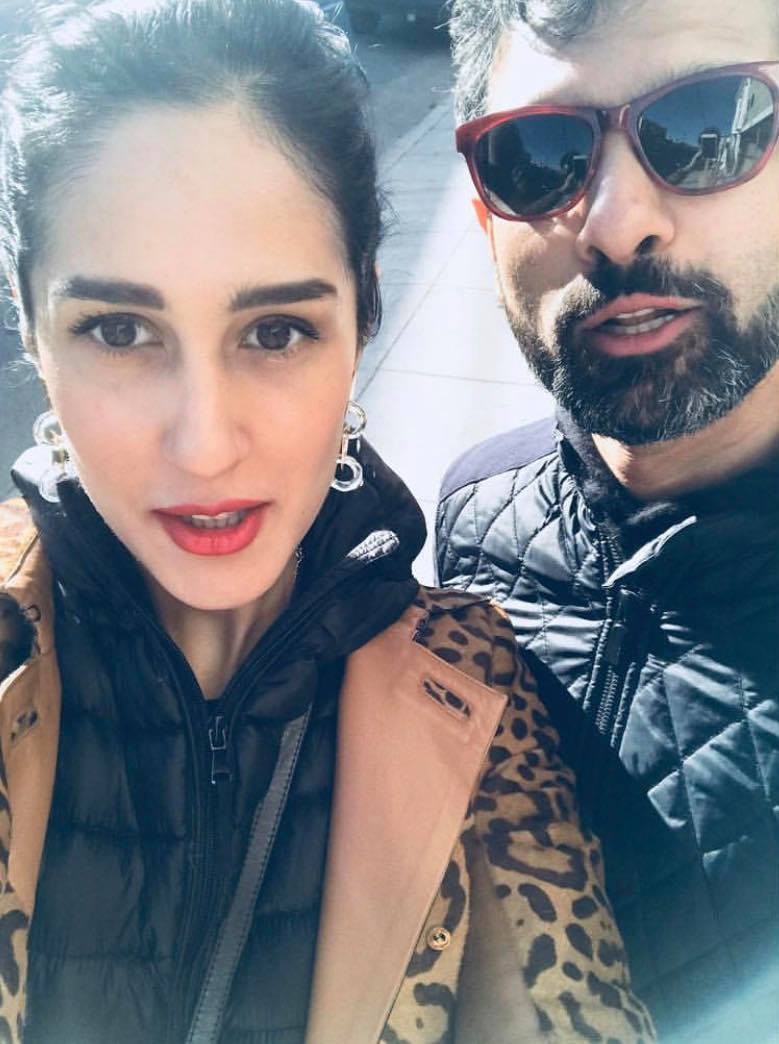 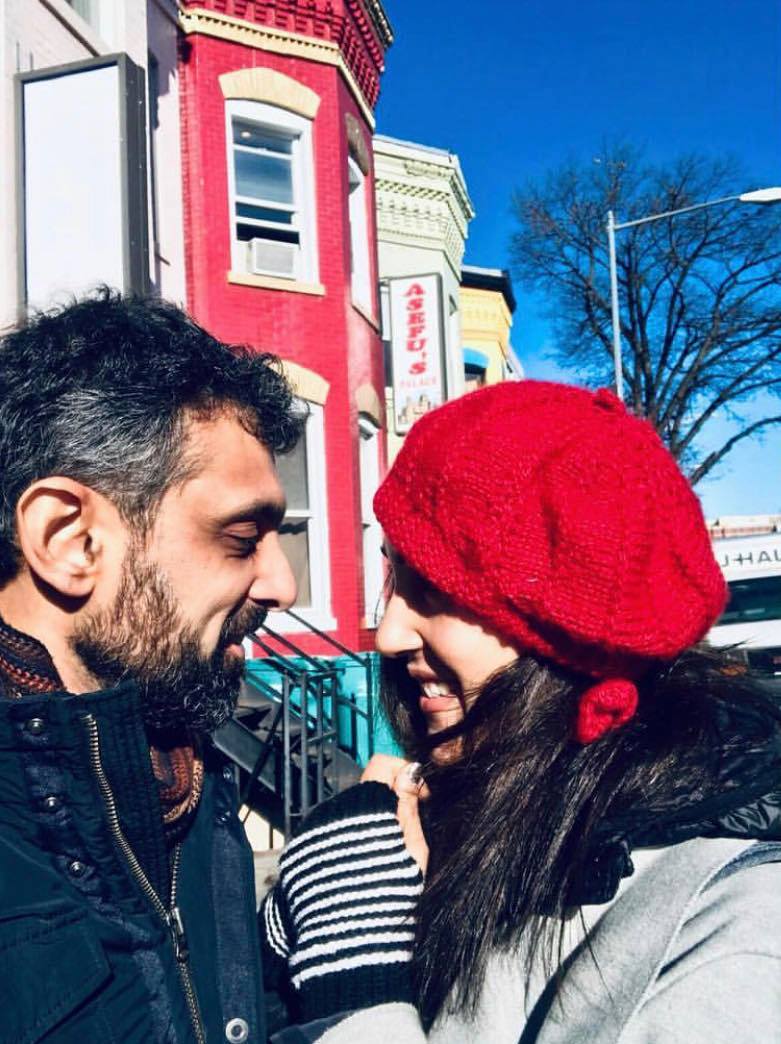 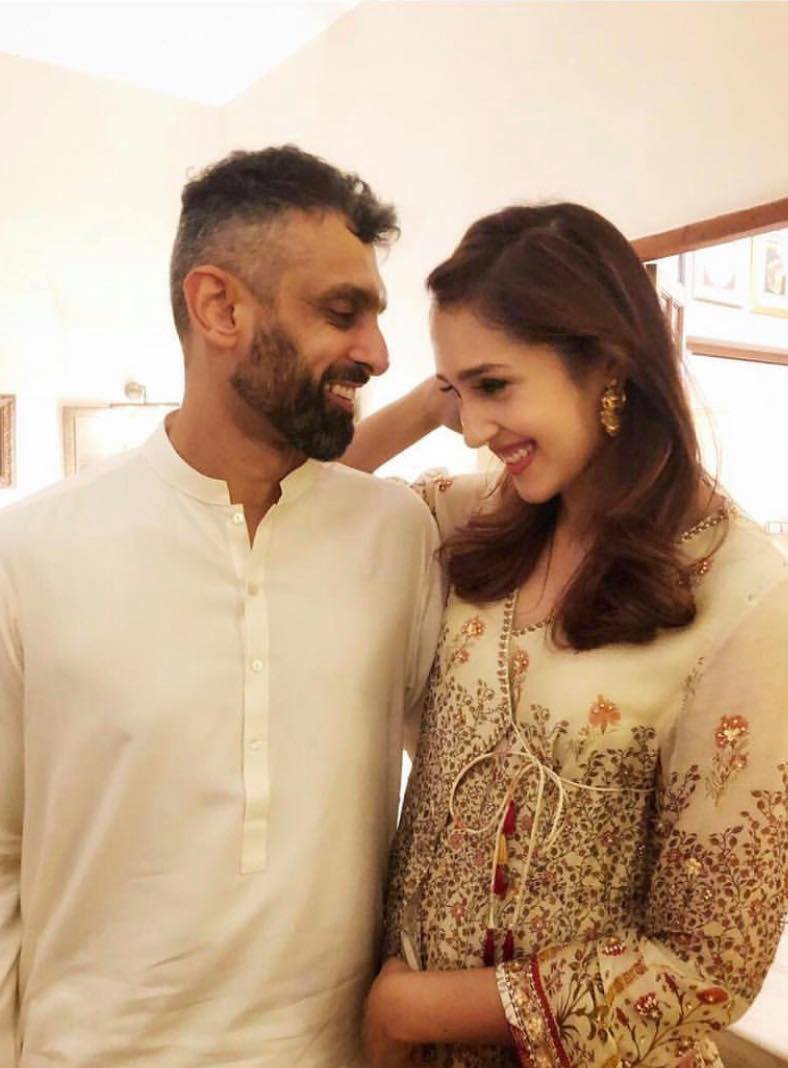 It is always good to see celebrities sharing such special moments with their families. Share your thoughts in the comments section.