In a shocking development PEMRA issued a notice to HUM TV after the last episode of drama serial Udaari went on air on Sunday 8th of May. Drama serial Udaari is a joint production of MD Productions and Kashaf foundation. The drama has been written by the famous writer Farhat Ishtiaq and is inspired from real life events. The drama serial attempts to raise awareness about the issue of child abuse.

The last episode showed Ahsan Khan’s character harassing Urwa Hocane’s character when she goes to his house to get something. Ahsan Khan’s character’s real intentions were revealed in the last two episodes. PEMRA has taken ‘notice’ of this new development because they say that they got many complaints from the viewers especially the parents because they thought that this drama was not a family drama. According to the experts at PEMRA the scenes and events that have been shown in the last two episodes show the dirty mindset of those who are behind this show and these scenes are against the ‘societal norms’!!!

Udaari is being liked by the viewers for a different storyline and for handling a very sensitive subject extremely sensitively but it looks like PEMRA tends to disagree. 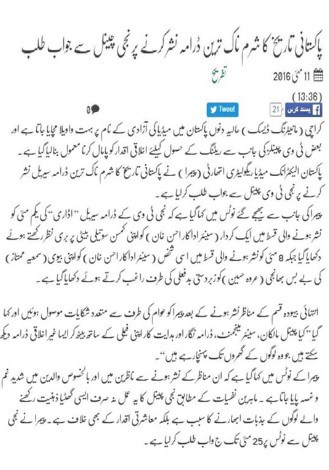