A while ago, I wrote an article about common scenarios/clichés being played to death in most dramas. Recently, I totally went off Pakistani dramas. Save one or two, I stopped watching them. The same old stories, negative characters, scenarios, etc put me off for some reason. Tuned into more English TV shows and struggled to find good online links. Netflix skimmed. Amazon Prime skimmed. Soul searching to find some hidden talent I may have that was rearing to be recognized and nurtured – nada. Like the prodigal daughter, I returned to where it all began – Pakistani dramas. I binge watched a few, viewed the odd episode or two of a few others, watched the OST and promos of yet a few more and was (pleasantly/unpleasantly) surprised. For lo and behold – new ideas! Where I had moaned over the lack of new ideas, here there were quite a few new ones all being presented in a few dramas at the same time. However, the question that sprung to mind was – were we better off without these ‘fresh ideas’?

So, here is what I found to be common in quite a few dramas. In no particular order (yes, I watched too many episodes of The Voice, I guess!)

Hero born with silver spoon in his mouth. Except, when he falls in love and parents do not approve of lady love – he throws out the silver spoon to be with the love of his life. Only, a little while later he comes crawling back to find the silver spoon and put it back in his mouth. So to speak. The spineless male lead is present in the form of Imran in Kuch Na Kaho, Umair in Tere Bina and Daniyal in Tumharay Hain. These men were quite convincing when declaring their love but as reality sinks in, paisa wins over love.

The heroine ready to elope at the drop of a hat. Granted, there are plenty of tears pre and post running away but in all the three dramas above the ladies in question leave their families behind with the hope of a new life with their husbands – only to be left stranded.

The desperate/psycho or borderline psycho male lead. So, for some reason the drama writers felt that the audience ‘loved’ the desperate female characters who cry,rage,scream,scheme to ensnare the man who very obviously wants nothing to do with them. So, they thought – ah, a spinoff! Let us introduce the rejected/crazily obsessed male character. Some even resorting to physical abuse. Salim Mairaj’s character in Tere Bina, Ali Abbas’ character in Khaali Haath, Sami Khan in Rasm e Duniya, Faisal Qureshi in Parsai and the drama which had a plethora of disturbing scenes in almost a hundred episode promos – Piya Bedardi. I do not follow Piya Bedardi or Khaali Haath as they fall in the category of following OSTs and episode promos that I highlighted above so correct me if I am wrong but that is sure the impression these characters give. Their scenes and madness certainly can not be termed as love! 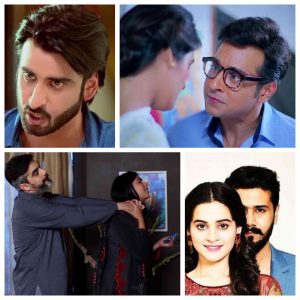 Super weird drama titles. Kambakht Tano. Seriously? Let me guess. Tano who is deemed as manhoos. Close? No prizes there for guessing! Bechari Mehrunissa. Bholi Bano. Meri Saheli Meri Bhabhi – or was it Meri Bhabhi Meri Saheli? Who comes up with these titles? And for what kind of audience? I have two bhabhis – I love them but I do not look at this title and think aww, let’s bingewatch with the bhabhis!

Shrieking Mums. Okay, so I get it. I say in a normal tone, dinner is ready. And nobody responds. I yell, dinner is on the table, not running a restaurant here, blah blah. Everyone appears. So, yes raising your voice a few decibels sometimes – understood. But yelling, screaming and shrieking when everyone is within an arm’s length and has your full attention in the first place!! Arrrgh! Not sure who can walk away with that title here – Shaheen Khan in Muqabil or Isra Ghazal in Andaz e Sitam. Or both! 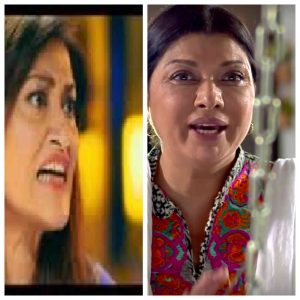 Talaaq dhamki to aging mother. So, there was the ever looming threat of divorce or actual divorce in the main lead couple. Or their siblings. Or their friends. A step ahead – extend divorce to the mum of the bhaaghi son to tame him. Ye Chahatein Ye Shiddatein, Kuch Na Kaho and Faltu Larki are the dramas that come to mind.

Blinding and dizzying direction. Okay, so this is something that came up recently in dramas such as Mera Yaar Miladay and Socha Na Tha (ARY Zindagi). While it is not a drama scenario, yet it is hard to skip past how the bright lights and the way the camera jiggles with uncomfortable close ups (I think there was one of a fruit bowl in Socha Na Tha) make me blink. It may appeal to some, but does not to me. Andaz e Sitam and Muqabil can be added to the list too where in Muqabil I can even figure out how the make up has been caked on some characters. Weird!

The housekeeper. It is amazing how the female character swoops in and has the whole household and events running with perfection while everyone praises her. I mean, seriously, bahu/beti chahyay ya housekeeper? Because if it is a housekeeper that was lacking then with Downton Abbey over, I am sure Mr. Carson and Mrs. Hughes will be looking for a job and will do a commendable one at that. A woman taking care of her in laws and family etc is all good – but it is just how everyone is so amazed by this sweet, beautiful woman who flits from each corner of the house, taking care of everything. The younger brother’s wife in Titli, Hania’s character in Phir Wohi Muhabbat, Pakeezah in Tere Bina, to name a few. 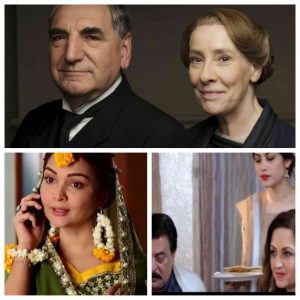 Last but not least – the suitcase! While this is not a new one, rather it is a scenario that pops up in every other drama since time immemorial – I could not resist bringing it up for it is one of my favorites. The suitcase that is empty and ready at hand to be packed when the female announces she is leaving – and the packing which is done in minutes. Seconds. While I struggle to find one empty suitcase to pack (not accompanied by threats of leaving home, haha but for whenever we travel) and then make list upon list with the master list stuck on the front door – these women are packed, suitcases zipped and out the door in seconds. Wah!

On a positive note, yes quite a few dramas are on air or going on air that deal with different ideas and issues. Udaari, Sammi, Pinjra, Muqabil and Khuda Mera Bhi Hai to name a few. But I am in a silly mood and just wanted to share my thoughts on the fresh ideas floating on air (quite literally) and would love to hear yours too 