Tonight’s episode of Sabaat covered Miraal’s growing curiosity and her attempt to keep herself busy. Anaya’s opinion about Hasan changed and Hasan is already dreaming about getting married to Anaya because she is ‘different’! Some of the characters are interesting but I must say that I am not too impressed with the dialogues. Even the situations are already getting repetitive. In this episode too there was a lot of focus on Miraal trying to control Hasan’s life. While Hasan’s friend’s undue concern for him makes sense, it is also extremely annoying! Basically, everyone has been shown opposing Hasan’s decision in their own way.

This episode also established the fact that Hasan and Miraal are not close to their mother at all. The only time we saw this family in the same frame was in the first episode! 10 days after the death of her mother, Miraal’s mother was thinking about marrying her children off! That was really odd.

Nirmal’s character did not add anything new to the story, she is another person who does exactly what Miraal wants. Miraal decided to start going to the office regularly yet there wasn’t a single scene in which she either discussed this with her father or one which covered him welcoming her. This was a slow-paced episode of Sabaat, I am waiting for the drama to take off. So far I feel that there is more focus on the visual aspect of the drama. Sarah Khan really should go easy on the make-up where it isn’t needed.

All the characters got plenty of screen time in tonight’s episode. The opening scene showed a more playful and uncompromising side of Anaya. This is one character that definitely has more going for it than all the others. Mawra Hocane’s portrayal is honest and convincing. Anaya is the only character that actually surprises me at times. Tonight in the bus she told Hasan something entirely different from what I was expecting her to say. This time around though thankfully Hasan did not change his plans based on what Anaya said! Anaya is level-headed and quite likable. I am finding it really hard to connect to Hasan’s ‘journey’ right now. Ameer Gilani is doing the bare minimum and that is just not enough! 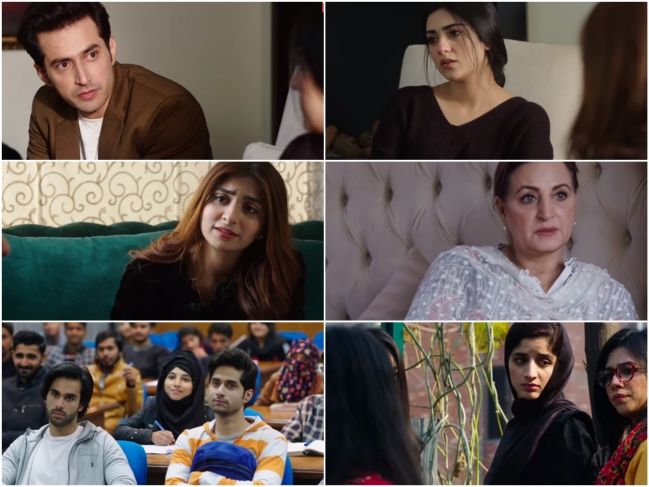 Nirmal is another person who reminded Miraal of naani’s younger days. The conversation she had with Miraal was a good way of telling the viewers how close naani was to Miraal when she was younger. Apparently Miraal does not remember much from that time and that could be the reason why she never had that connection with her naani. I am wondering how all those memories were erased from her mind and the only thing she remembered is that naani used to drive. This was one of those conversations which started off well but turned out to be quite meaningless! Ali is back in the picture and both the scenes covering his interactions with Miraal clearly showed that she was fed up with him. Someone like her shouldn’t be waiting so long to call an engagement off and it was also strange watching her dining with the fiancé she cannot stand.

Miraal locked herself in her room after her naani’s death and she has been secretly reading her diary. Unfortunately, there was no new information in this diary. What Miraal read was a repetition of everything naani had been saying to her. I really wish we could move on and I am waiting to find out where all this is leading. The fact that naani was a lot like Miraal has been well established by now.

Hasan and Anaya’s last day in the university was also the first day when they interacted in a friendly manner. Their conversation on the bus was well written but honestly speaking I am not rooting for this couple just yet! Why would someone like Anaya fall for Hasan? Waiting to find out. The ‘advice’ the professor gave these students was quite lame! I wish this advice was more meaningful and not so plain. 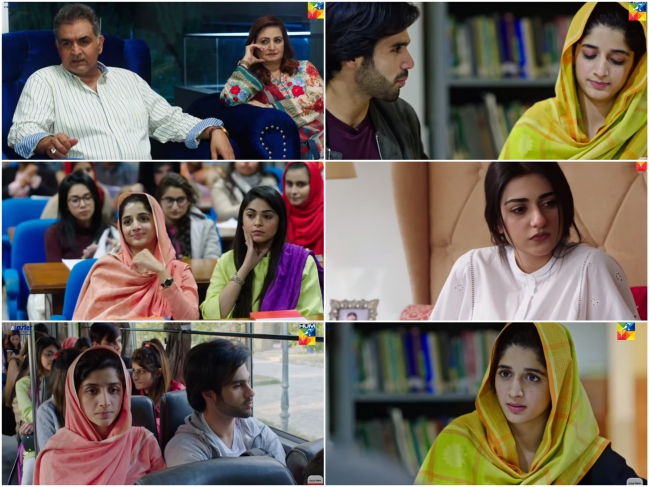 Miraal finally told her parents about Anaya, thankfully her father did not overreact like her. Later on, it was surprising that she made the first move. She is surely not going to be accommodating so easily therefore it remains to be seen what she intends to do. Hasan’s father seems like a sensible man and the actor playing the role has also done justice to it. Anaya’s scene with her father was sweet as usual.

I must confess that I am especially disappointed with Miraal’s character, it is too shallow so far. Although Hasan is out to prove himself but his journey isn’t as engaging and impactful as it should be, given the circumstances. Ameer Gillani’s overall look and performance both have been quite average. I am wondering how he managed to bag this role. Mawra Hocane has been acting really well throughout. Javeria Kamran also gave a decent performance tonight. I was definitely expecting more from this episode. I am really hoping that we get to see better episodes in the upcoming weeks.

Did you watch tonight’s episode of Sabaat? Do share your views about it.