Salman Ahmed and Farooq Sattar promoting their cause at MAJU!!

It is always more than a pleasure when you see your country progressing in something if not economy, and no doubts about the fact that this nation is all full of talent. If you are an university student and keeps a track of all the latest happenings, you must know what level of potentials our youth has. It was only today that I attended a technology related competition which had been organized by the volunteers of Mohammad Ali Jinnah University-Karachi, and it was a real fun being there. 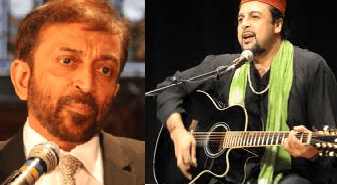 Skipping the professional and academics part from the story, I decided to share the happenings that took place in the event which are related to the celebrities we genuinely love to see on our television screens. The heroes of this event SPARC-2013 are the guitarist-cum-singer, Salman Ahmed from the band Junoon and Mr. Farooq Sattar, the representative of one of the major political parties that are active in Karachi, the MQM.

The audience could not stop hooting when Salman Ahmed first appeared on stage and his legendary song “Junoon se aur ishq se milti hai azaadi” was been played in background. It was announced that it would be Mr. Imran Khan to appear in the university to hand over the gifts and prices to the winners but as Salman Ahmed revealed, Mr. Khan is really occupied in Lahore for his Jalsa which is scheduled on 23rd of March. Salman, though declared himself as an artist with no political influences, his speech had clear shades of how much he is inspired by the great Captain, Imran Khan and his policies. He also asked  the students to spare one day from their studies and visit Minaar-e- Pakistan on Pakistan day because that Jalsa would be a historical event and one should not really miss it. 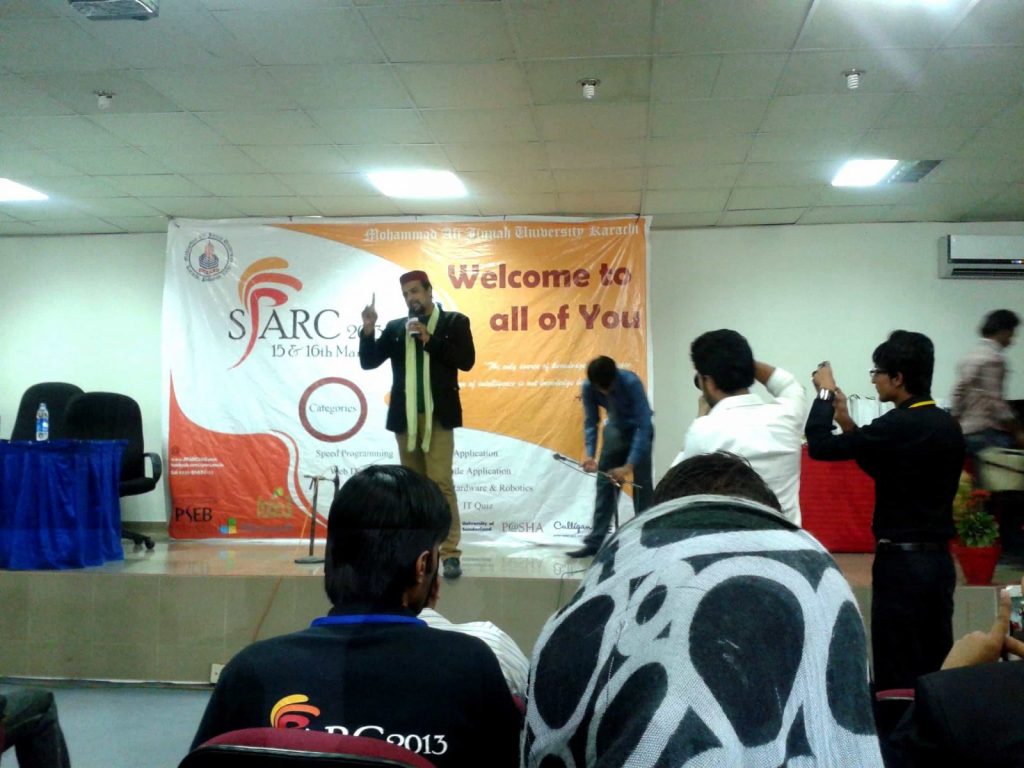 Sharing his experiences with the audience, Salman stated that his mother gave him two options to choose as a career, one, to become a doctor, and second, to become a doctor indeed. He shared that after his degree, he asked for a year for himself to explore what he actually wants from himself and it was then that he found his talent. He also shared few moments that he spent with his dear friend Junaid Jamshed and turned the center of discussion from politics towards his new song. It was only at that time when the chief guest and a sound member of Mutaheda Qoumi Movement, Mr. Farooq Sattar entered the auditorium and it seemed strange to have two representatives of different political parties sharing the same stage.

Salman Ahmed addressed Mr. Sattar and informed him that it was “Dil dil Pakistan” few years back and its now “Naya Pakistan’ Inshallah”. With this, he started performing on the song and left no other option for the viewers but to feel a patriot within themselves. 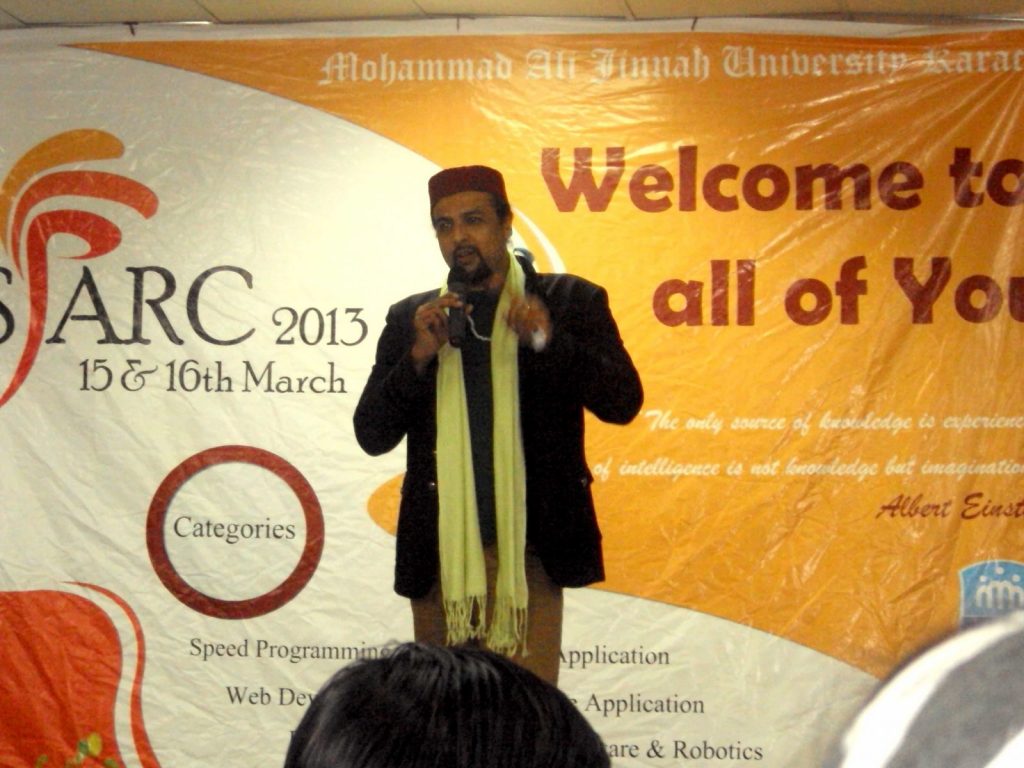 Just after Salman’s performance, It was Mr. Sattar who started his speech and mentioned that his words follow the policy of ZONG (that is, SUB KEHDO) and not of Telenor (That is. Tawk Shawk, Baton waaton main). The humor that his words created lightened the environment and he further continued his speech, highlighting the aims and objectives of his party. 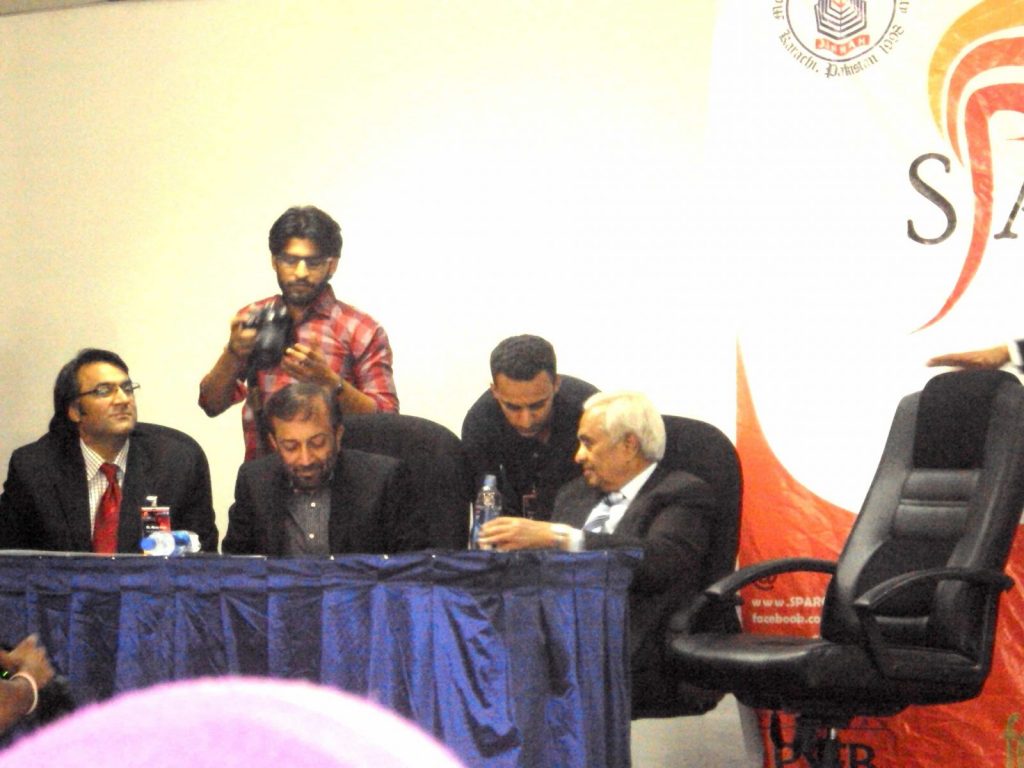 He also encouraged the youth to come forward and take a stand to ensure the personal security in a country where Pizza Service is quicker than the Police. The students of the university and the participants from different universities maintained the decorum throughout his speech and finally he handed over the prices and shields to the winners of the competition.

It was a good experience all in all to hear from two celebrities who were there to represent their work, trying to promote their work and ideologies among the youth of Karachi.

Hoping that you will find this share interesting enough to leave your comments,

note:Click on the link to see Salman Ahmed’s performance on NAYA PAKISTAN: http://www.dailymotion.com/video/xy8yl5_salman-ahmed-performing-in-maju-naya-pakistan_people