Samira Fazal In Trouble For “Stealing” A Story

Until now Pakistanis dramas have only received unprecedented appreciation from the Indians but now it looks like things are about to take an ugly turn. Mera Naseeb, which was a big hit in Pakistan because of its crisp story and sharp direction is now being aired on the Zindagi Channel in India.

Many of the viewers in Pakistan have been saying it over and over again too that this was not an original story but Samira Fazal’s drama Mera Naseeb was based on a story written originally by an Indian writer Chitra Banerjee Divakaruni, this story was titled “Sister Of My Heart”. Until now, many people had a hard time believing that a writer like Samira Fazal will copy someone’s work without asking that person first even though it was mentioned in the credits of the drama that it was an adaptation.

The writer of the original story has spoken up against what happened and she intends to do everything in her power to seek justice.

Here is the status update of Chitra Banerjee Divakaruni: 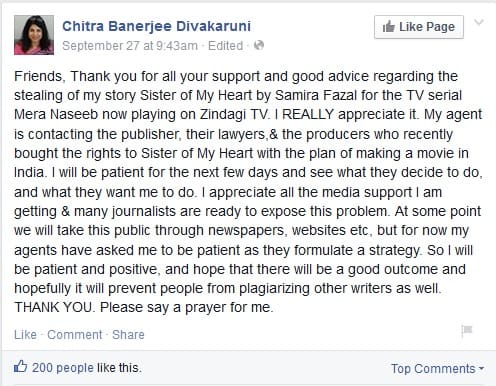