Chandni and Sammi’s track was the highlight of this latest episode. Aalyan’s (Bilal Khan) connection with Salaar (Ahmed Raza Mir) and the developments in Naheed’s track have broaden the scope of the story. Rashid’s mother’s latest discovery will also make this particular track even more complex. All the sub-plots in the story are interconnected and cover a great deal; it is not easy to write such a narrative and it must have been a daunting task for the director to do justice to all these tracks. So far, all the tracks are getting plenty of screen time and I must say that Sammi’s track in particular has my undivided attention especially after last week’s episode. Chandni’s character is beautifully etched-out and Sania Saeed has done complete justice to it. She is tough on the outside only; she is practical but also caring at the same time. She is seen complaining every now and then but she has taken responsibility for Sammi. Chandni made it very clear right at the outset that she was not going to ‘baby sit’ Sammi and in this episode as well she let Sammi pay for her own clothes. She taught her what she needed to know in order to earn money and she keeps on giving her sound advices which will help her grow into a strong individual but she is making sure that Sammi does not expect more from her. Chandni and Sammi’s track is balanced and has been written intelligently. Had Chandni gone out of her way to help Sammi then Sammi wouldn’t have the opportunity to grow and it might have been difficult to relate to. Mawra Hocane is well-suited for this character; she has been convincing as the naive girl who still thinks she might get to go home some day and also someone who has no identity of her own.

Naheed’s relationship with her nephew and Aalyan’s connection with Salaar was also an interesting part of this episode. Naheed asked Ghulam Rasool to marry her but the preview of the next episode suggested that her brother will reject this proposal. Nadia Afghan is another actress who always gives a solid performance. This was the first time that I watched Bilal Khan in a play and he did quite well in that one scene. Ahmed Raza Mir also gave a very steady performance in this episode especially for a newbie. It is always great watching new actors on screen who manage to do so well and make you look forward to more. 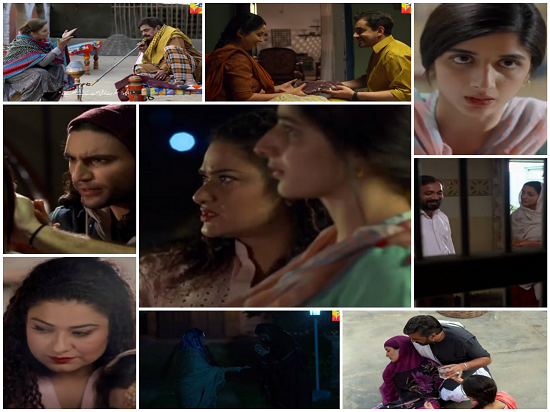 Rashid’s secret is out and I am waiting to find out how Chaudhry’s wife will cover up her tracks now. Seemi Raheel completely owns her role right from the beginning but sometimes she gets a little more screen time than is necessary. The scene in which Sammi cried and later on shared why she was crying was so meaningful. Even after everything that happened to her, she has not been able to hate her brother for it. She still thinks of him as the brother who she grew up with and who she thought loved her. Sammi’s parents on the other hand have not only forsaken her but now also blame her for not ‘protecting’ her brother.

This episode had some very important developments to its credit which laid down the foundation for what is coming ahead. Chaudhry was completely absent from tonight’s episode but the preview of the next episode suggested that he will be back with a big bang! Right now I am more interested in Sammi, Chandni, Salaar and Aalyan’s connection than anything else.