Sanam Baloch to be seen in a new Drama Serial “Kankar”!

Seems like every new day is becoming a memorable one in the books of Hum Network where a new drama is coming on screen each day, introducing a new level of hype among the audience. We  have been sharing all about the upcoming dramas of this year, thanks to Hum, we have once again a happening news to share with you all.

Hum TV is soon going to air its new drama serial under the title ‘Kankar’ which would bring back the stunning, the stylish, the actress, Sanam Baloch on the channel. Sanam has been lately seen only in her morning show on Samaa TV after her running serials came to an end by 2012. No doubts about her fan following, the promo recently leaked on the channel few hours back has already brought the audience in an excited state where people are  actually talking about the serial and the cast of the project. Along with Sanam, Mohib  Mirza and Fahad Mustafa would be sharing the screen and even these two celebrities are expected to contribute in taking the TRPs of the drama up-equally.

Hum TV, in fact, many of the hit dramas these days are either  written by Umera Ahmed or are  directed by Mehreen Jabbar, in not any, then are atleast produced by Moomal Productions, and guess what, the first one comes true here. The Script is written Umera Ahmed, where as the drama is directed by Abis Raza. Adding more spice to the drama, Behroze Sabzwari is also seen in the images been leaked on social networking sites that were been taken on the set of Kankar. 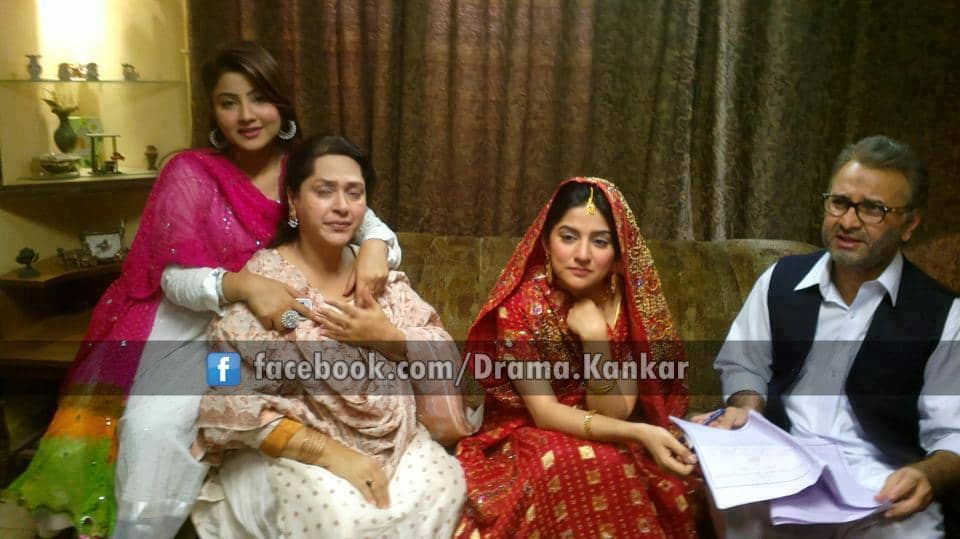 The date of been aired is still not revealed but the controversies are emerging on social media where the viewers are trying pretty hard to guess the story. It is predicted that Sanam Saeed’s Kadoorat and Sanam Baloch’s Kankar are going to mark new levels of TRPs in the upcoming days,

Lets see how this one turns out to be, Leave your views about the project,