Ohkay so, the production of Momina Duraid, the writing of Mona Haseeb & the direction of Haseeb Hassan, Sanam hit our TV screens tonight. Honestly speaking, as much as I was looking forward to this drama when it got announced by the end of Diyar-e-Dil, I am not feeling it much now that it is on-air. I am sure the journey has just begun so it might give us something to look forward to or at times, it might also give us some good moments to be entertained with & I am definitely ready to give it a go, but as a whole, the first episode has got me thinking.

The story has started with the marriage of two polar opposite people; Harib (Osman Khalid Butt) & Aila Juhi Chawla (Hareem Farooq). It seems that Aila used to work in Harib’s office & that’s where they both got interested in each other & decided to get married. Harib is a calm & collected guy who is very much in touch with his emotional side. Harib believes in understanding people, he also believes in giving them the space & the edge they want that allows them to just be themselves but Aila is bipolar & not only that, she is someone who Harib is unable to connect with that too in the very initial stages of their relationship, like you can say within an hour of being married to her! I am sure or let’s say that I am hoping that in the future episodes, they will take us back to how Harib & Aila’s love story started because going by what they showed us in this episode, it looked like a match made in hell because Harib seems totally clueless about Aila’s personality whereas they suggested that they both were in love before they got married, so it definitely means that they must’ve spent a lot of time with each other before their marriage, so the way Harib seemed confused & shocked at Aila’s panic attack makes me question the bonding they both shared because it somehow doesn’t sit well with me & I am having a hard time believing that this was the first time Harib saw this side of Aila’s personality. I think the writer is trying to stir some sympathy for Harib by showing us that he had no idea what he was getting into, but I surely would’ve bought that if they had showed that Harib & Aila were complete strangers who were forced into a marriage.

It looks like Aila’s anxiety & panic attacks get triggered by very nominal things, because what Harib said to her was just something that a newly married guy would say to tease his wife, so I definitely am not going to buy that Aila had full control over her anger & personality issues before she got married to him & she deceivingly succeeded in concealing that side of hers. If the writer is trying to show that Aila has some sort of personality disorder, than she should’ve showed that this was the pattern that Aila followed & this was something that Harib knew of & then he chose to be a bigger person by going ahead with his decision of marrying Aila out of his love for her because that would’ve made far more sense. I feel by showing us that Harib was oblivious of what he signed up for, the writer is trying to turn Harib into a mazloom shohar, whose life is about to get ruined because of a psychotic wife like Aila. I definitely don’t mind watching such characters on-screen that have anxiety or depression or have some personality disorders, provided the writers deal with their issues with maturity because people in real life do go through all these issues, but here I have a feeling that in stead of showing us how a person like Aila will be dealt with & what her real issues are, she will be used by the writer as a villain, to only make us feel for the struggles of the guy who will be victimized by her because all of a sudden, she has been shown in such a negative light that it makes me certain about the writer’s intentions regarding Aila’s character. 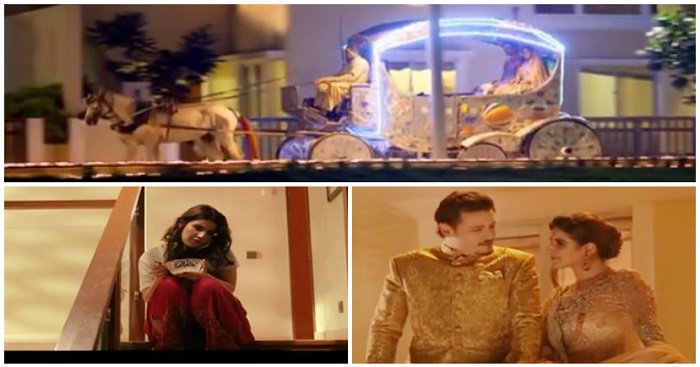 Well, Harib had to attend an important meeting the day after he got married & seems like he is a self-made man who achieved everything on his own, but I find it hard to believe that his work ethics were so poor that he forgot to put his phone on a silent mode before attending such an ‘important meeting’ for which he had to leave his day-old wife at home. Well, in the initial part of the episode I felt that Harib was madly in love with Aila & he was ecstatic to have her in his life but all the things he said to his best friend Shehroz (Emaad Irfani) came as a shock to me because their conversation suggested that Harib just got married to Aila for the sake of a social experiment & he got married to her not because he was in love her with but because he was sympathetic towards her. Harib also said that he knows what Aila has been through & how her struggles have shaped up her character & personality, which again brings me to a point that when Harib had an in & out knowledge about Aila, how come it was the first time that he saw that ‘episode’ of her personality? Shehroz’s comments about Aila suggested that everyone in the office is unsure about Harib & Aila’s relationship & they are certain that it isn’t going to last for a long time. I must say, going by how Harib started discussing the nitty gritty of everything that Aila did on their wedding night was a little off-putting, like at one hand you claim that Aila has completed your life & on the other, you are literally backbiting about her & telling your friend that you dozed off in the middle of the conversation that your wife was having with you on your very first night together? So, I am sorry but I don’t see any “love” between Harib & Aila at all. It looks like Harib just decided to get married to Aila without thinking things through & now he has already started regretting his decision, which again brings me to my point that the writer is trying to turn Harib into a halaat ka maara, who will be saved by the daughter of his next door neighbor.

Aan (Maya Ali) & her mother (Hina Bayat) have just moved into the neighborhood & Aan’s mother is trying hard to fit in. She has obviously moved to this neighborhood because she wanted to do something for her daughter. They come from a very conservative & humble background but it looks like Aan’s mother had a very different perspective & that is why she made sure to empower her daughter by educating her, which was something that even her husband Shaukat Qureshi (Abid Ali) didn’t approve of when he was alive. Aan’s mother doesn’t want Aan to get married to her paternal cousin because she knows that Aan will be made to live the life that she doesn’t deserve. I actually found the mother’s character quite interesting but I was a little disappointed to see Sir Abid Ali being shown as a spirit which was a result of Aan’s mothers’ hallucination or delusion. From our beloved & favorite Agha Jaan to Shaukat Qureshi, that too in such a setting, hmmmmmmm!!!! 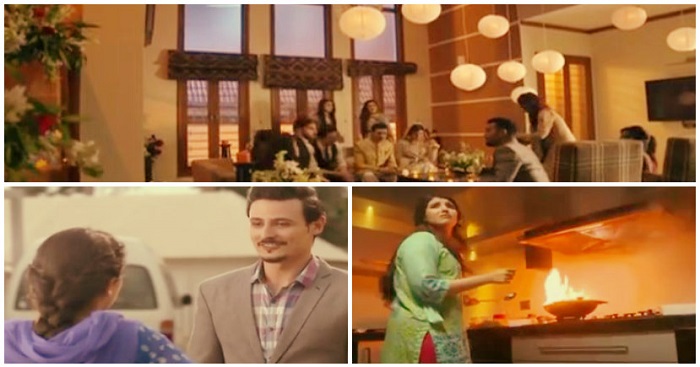 Well, Aan is your typical seedhi saadhi larki, who is very much in touch with her roots & has a high regard for the background that she comes from. Aan’s mother might not be a fan of the life that she has left behind but it is obvious that Aan finds it hard to let go of everything & anything that reminds her of her father. Aan wants to stay connected to her roots & she is not as ambitious as her mother is. I liked the detailing of the furniture in Aan’s house because it perfectly depicted the lifestyle that they actually had & were used to, which now Aan’s mother was trying hard to let go of. Well Harib & Aan had an interaction & Aan ended up giving him the energy he must’ve needed to conquer the world by offering him an Anda Paratha Roll. Hmmm, Harib is such a masoom sa larka, whose villainous wife doesn’t serve him breakfast but thankfully he has such caring neighbors who carry an extra roll for him in their lunch box to save the day. I guess the writer is trying to show that if a husband is not served a breakfast, it makes him an ultimate bechara who has to be sympathized with.

Overall, this episode didn’t make such an impact that I expected & thought it would. I found no chemistry between Osman Khalid Butt & Hareem Farooq, yes, on their own they both tried their best to give a good shot but together, they didn’t make a good couple. I so wish the casting director had hired Sajjal Ali to play the character of Aila because she not only had looked great with Osman Khalid Butt, she would’ve looked cute in the scenes where Harib must’ve pampered her & she would’ve made a perfect villain with some psychological issues because yes, I strongly believe that Hareem can look poised & elegant because of her strong personality, but she most certainly can’t look ‘cute’ which the the director was trying hard to convey. Hina Bayat’s character was the only thing that worked for me in this episode & I actually enjoyed watching her scenes, I was a little taken aback by the setting in which Sir Abid Ali made an appearance because I thought he would be shown in the flashback sequences but he happens to be a free spirit, hovering in Aan’s house!?!?! Maya Ali didn’t leave a strong impression but I am sure she will steal the show when her character will get enough coverage. Osman Khalid Butt’s acting was good & Hareem Farooq seemed to be trying too hard but she couldn’t do justice to Aila’s character. Direction of the episode was good, there’s no denying to the fact that Haseeb Hassan knows the art of direction & his attention to detail is commendable, but this time around, just like Mann Mayal, it is the writer who I feel hasn’t done that much of an impressive job. Let’s see how things will unfold. Please share your thoughts about the very first episode of Sanam.