Former Pakistan fast bowler and cricket analyst Shoaib Akhtar resigned from PTV after things turned unpleasant between him and host Nauman Niaz on the popular show Game on Hai on Tuesday. As Shoaib Akhtar was going through some cricket trivia — during which he credited the Pakistan Super League’s Lahore Qalandars team for discovering Shaheen Shah Afridi and Haris Rauf — the show’s host, Nauman Niaz, seemed to take offense and snapped back at Shoaib.

“You’re being a little rude and I don’t want to say this: but if you’re being over smart, you can go. I am saying this on air,” Niaz told a dumbstruck Shoaib, cutting him short and moving to the next guest for their comment. It wasn’t clear what rubbed Niaz the wrong way, and it seemed Shoaib himself was caught off guard. As the tension in the room heightened following the interruption, Niaz called for a commercial break.

Multiple clips are circulating on social media so I thought I shud clarify. pic.twitter.com/ob8cnbvf90

and seniors and millions watching. I tried to save everyone from embarrassment by saying I was pulling dr nomans leg with this mutual understanding that dr noman will also politely apologise and we will move on with the show ,which he refused to do. Then I had no other choice .

Several clips from the segment have been doing the rounds on social media, with a number of Shoaib’s supporters expressing disappointment and anger towards Nauman Niaz for “demeaning a legendary cricketer” on live television.

Very sorry to see the clip of Nauman Niaz insulting our national hero @shoaib100mph on PTV. Shoaib is a true hero and will always be. I cant believe Dr Nauman acted this way with an International celebrity in such a rude manner. Unbelievable

PTV is run by public taxes and we the public cannot tolerate someone to be fed on our taxes who doesn't know how to respect legendary players of this country. So being a taxpayer I demand govt to immediately take action against Nauman Niaz for disrespecting Shoaib Akhtar.

Narcissist Nauman Niaz really needs to learn how how to treat his guests. Shoaib Akhtar didn't deserve to be embarrassed like that,…. on live Tv. 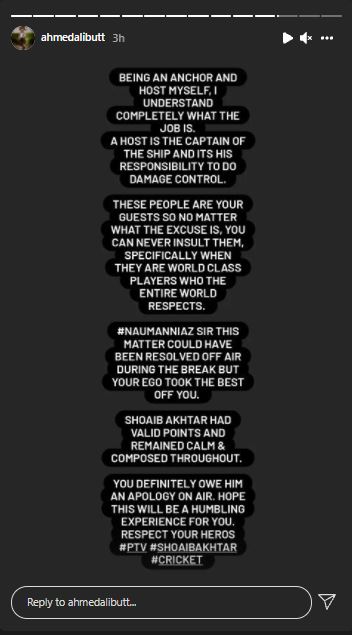