Although there has been no character development in this play at all in all these weeks but even then all the characters have their own charm. I was however hoping that the story will take a different turn from here but it seems like this is going to be one of those dramas in which the person responsible for putting everyone through hell will be getting away with a lot more than we thought she would be. After watching this episode and the preview of the next one, I have very little hope now that Nayla will ever learn her lesson. Apart from characters which are very interesting and situations which are realistic and easy to connect to, I really like the way this drama has been directed. I love how the director makes sure that in critical situations everyone’s reaction is covered by focusing on the expressions and not relying on dialogues all the times.

Ahmed’s parents are turning out to be my most favorite characters because they are one of a kind. It is refreshing watching in laws who will do anything to make their son’s marriage work even though their daughter in law has tested their patience more than once. They do not compromise because they are naive but they do so because they believe in going out of their way to make relationships last. It shows how they were brought up and what a different perspective they have of life. They are not vengeful or egoistic. There are times when they get annoyed, impatient or disappointed but their priorities never change. I loved Abid Ali’s expressions when Ahmed’s daughter asked him if he was going to stay with them forever. Ahmed’s reaction to the whole situation is realistic as well and completely in line with his character. He is a loving and caring human being but he finds it really hard to live with someone like Naila for obvious reasons. 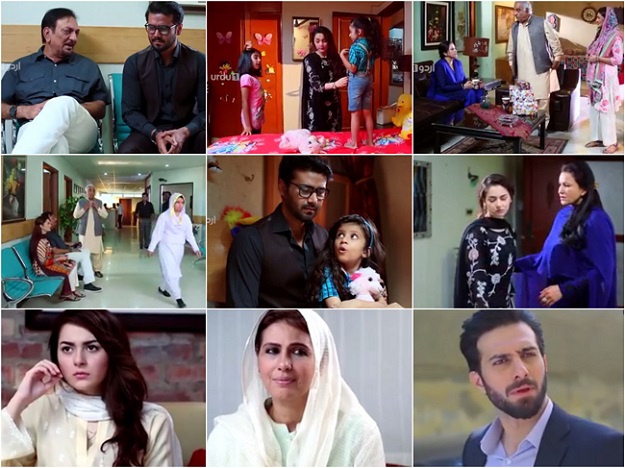 Naila clearly wanted Ahmed to stay with her but just like always she was not willing to change her attitude at all. Naila has always used Ahmed and she still does not even like or respect him after all these years which is why it is very difficult for her to make compromises. It is funny how Naila always sleeps peacefully and enjoys her outings no matter what is going on in her life, she puts her own pleasure before everything else. There is no room for other people in her life unless all these people do everything according to her terms and conditions.

I really enjoyed watching this episode as well, it was entertaining, well directed and all the actors fit perfectly in their respective roles. The preview of the next episode suggested that Naila will fall for Emad Irfani’s character – he is the perfect candidate, very good looking! Naila has been shown as a shallow person for whom looks are more important than anything else and she has clearly not “moved on” yet! She is still looking for her prince charming even though she is married and has two kids! I am waiting to find out how the story unfolds in the upcoming episodes. I doubt that Naila’s character will change now therefore it remains to be seen how she will ultimately pay for all these blunders and for taking people who love her for granted.