After the shocking twist in episode 12, the story is back on track and I have to say that even though the story of the drama is too simple and there has been no character development so far but surprisingly enough I am still hooked to this show. Titlee always was and still is a guilty pleasure but one which I am enjoying reviewing. Usually, we avoid reviewing dramas which we watch strictly to pass time because you never take these dramas too seriously. Reviewing such dramas kills the fun because then you end up paying attention to every minor detail. Titli is an exception because I look forward to watching and reviewing it. We all need to watch a drama every now and then which is nothing more than meaningless entertainment. A major reason why Titlee is so enticing is that Hania Amir is playing the lead in this play flawlessly. You hate Naila but at the same time it is actually fun watching her character get away with everything and you wait for the time when she will finally get punished in some way. It is interesting watching someone like her who has no idea just how wrong she is doing exactly what she wants mainly because the people around her are just too nice. It is also amusing watching role models like her sister and sister in law who are complete opposites and can do no wrong.

Naila finally realized that she could not go on living in her parents’ house primarily because she could not handle the housework. Although she wanted to go back to her in laws and live the life she was living but she wanted to create such a situation that her in laws would beg her to come back. She managed to do just that and she was back in paradise! 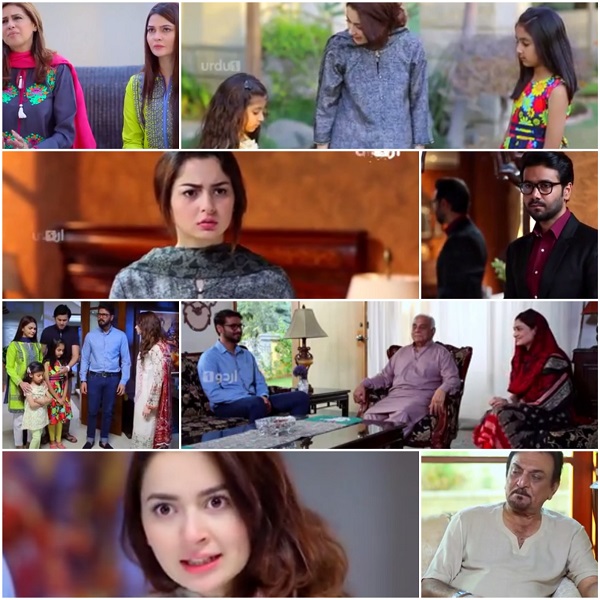 8 years passed quickly and personally I don’t mind that but it was awkward when Amir’s wife was wearing the same clothes 8 years later too! There was absolutely no change in Naila’s behaviour and her in laws too continued to be very flexible. Although all these people are just too sweet but you also understand why they do not want Naila to go away. Ahmed’s parents value family ties more than money and can’t live without Naila’s daughters therefore they did whatever she wanted. I actually like the fact that for a change we are watching parents like Ahmed’s parents. They are open-minded, loving and mature. Ahmed’s reaction was realistic as well. Naila is a controlling mother who does whatever she needs to do in order to make her daughters do whatever she wants. Basically, her attitude with her daughters is exactly the same as it is with everyone else.

The preview of the next episode was alarming! I am wondering how Naila managed to buy herself a house. I am really enjoying watching Titlee even though it is nothing grand. It is always entertaining and gives me a reason to tune into it next week. Hania Amir is an amazing actress, love her in this role and waiting anxiously to see her in a lead role on the silver screen.